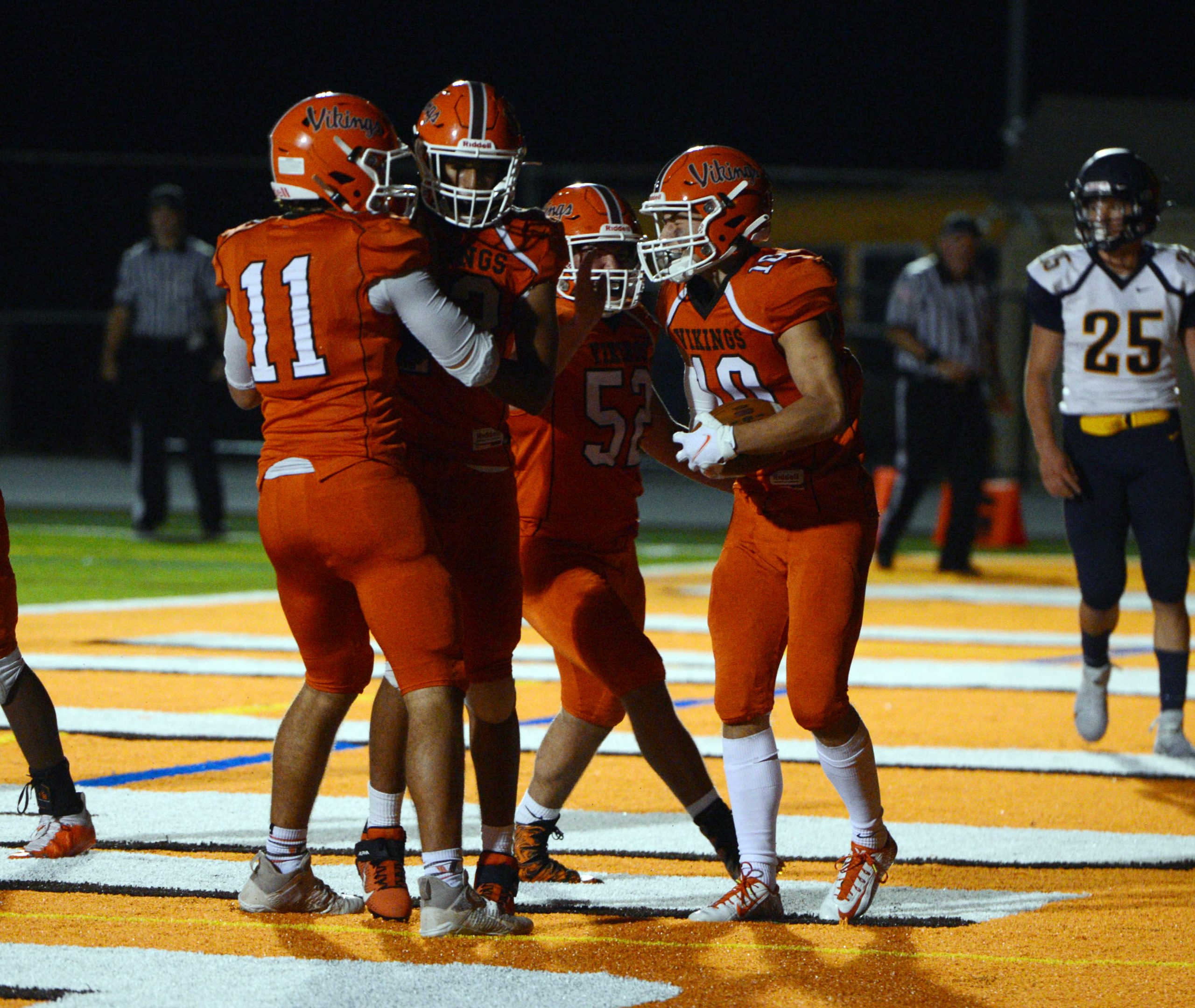 QUAKERTOWN >> It was in “Super Bowl” mode this past week.

That was the mindset Perkiomen Valley assumed in preparation for, and anticipation of, Friday’s game with Quakertown: A non-league capper to the Vikings’ pandemic-pocked 2020 season, a lesser alternative to recent campaigns that saw them competing for District 1 success. And based on their play against the equally-potent Panthers … well, a rendition of Queen’s “We Are The Champions” would have effectively sized up the euphoria they experienced.

After trailing its hosts by two touchdowns for much of the first half, Perkiomen Valley scored 21 unanswered points in the second half to rally to a 35-28 win over Quakertown at Alumni Field, an ultimate reward the Vikes enjoyed heartily.

“All week, we treated this like a championship game,” PV quarterback Ethan Kohler said after orchestrating a two-touchdown, 200 passing yard response to Quakertown’s early point production. “We fought. We weren’t going to let their big lead stop us.”

The Vikings (6-2) found themselves down 14-0 early in the second quarter, Quakertown getting on the board less than 2-1/2 minutes into the game off Tyler Woodman’s 11-yard run five plays into the opening drive. The Panthers saw another possession, 14 plays and 66 yards in duration, end on downs at the PV 12 before Will Steich collaborated with Tyler Merwarth on a 43-yard aerial score.

Two times after that, the Vikings halved the deficit only to see the home team move it back into double-digits. But they got even with Quakertown (5-2) late in the third quarter, then got their first lead of the night with 5:05 left in the game when Kohler connected with Jason Posner for a 22-yard TD strike.

“The kids are resilient,” PV head coach Rob Heist said. “They truly believe they’re never out of it.”

The Panthers made a concerted effort to get back on track. Starting from their 35, they covered 30 yards in seven plays to the PV 35; but the Vikes’ pass defense put the brakes on the surge, getting the ball back on downs after leaving Quakertown empty on three pass attempts after that. Jeremy Brewer defended the third-down pass into an incompletion before Gage Young rose to the occasion on fourth down.

“We just trusted our game plan, sticking to it on both sides of the ball,” Heist noted. “We had some good pass breakups.”

When the Vikings got just four yards on three subsequent plays, they opted to punt the ball back to the Panthers with little more than a minute left. But when the Panthers muffed Brayden Basile’s kick at their 15, a special-teams hero from last weekend’s game with Daniel Boone made another big play.

Aidan Owens, who returned a blocked field goal for a touchdown against the Blazers, was in position to recover the muff. That got PV the ball back, and Kohler finished off the game with a pair of clock-liquidating kneels.

“I take every play seriously,” the Viking senior said. “They (Quakertown) were muffing it all game, so it came out nicely.”

In keeping with a season-long strategy, Kohler (12-for-21, 208 yards) got five teammates involved with touchdowns. He made 20- and 22-yard TD tosses to Leo Hunsberger and Posner, respectively, to overtake Quakertown. Kevin Beattie (84 yards), Posner (40) and Rasheem Grayson (20) each had three hookups with their junior signal-caller while Hunsberger added a 40-yard reception.

Thompson went 19 yards through his left guard for PV’s first touchdown at 10:01 in the second quarter. Hunsberger made a 10-yard scoring run 5:37 before the half, and Shaheem added a 20-yard run with 9:35 left in the third.

“These guys who are skill players have a bunch of speed,” Kohler noted. “They were inexperienced at the start, but feeding them the ball during the season got them more experience.

“The big thing was getting games in,” he added. “We were fortunate to have as many games as we did.”

“I thought we changed everything up nicely.”

“We were fortunate to get eight games in,” he said. “We wanted to be competitive. No matter what the record, we wanted to be happy playing football.”

NOTES >> Owens had another big play on PV’s defensive side, intercepting a Steich pass at his 19 before halftime. … Quakertown has two more games left on its 2020 season schedule, both at home. It will host Downingtown West Friday, Nov. 20; and its traditional Thanksgiving Day clash with Pennridge is still on for Thursday, Nov. 26.