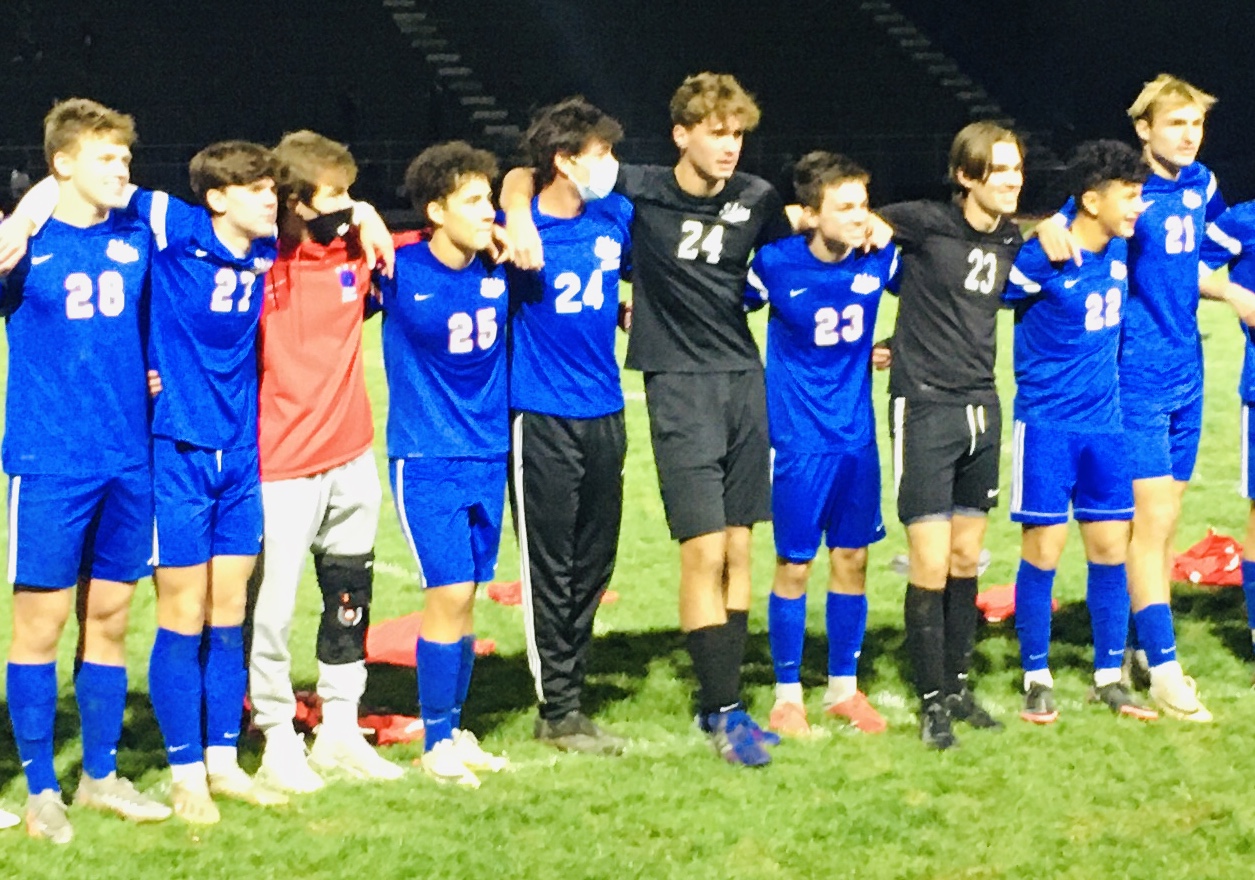 Members of the Neshaminy boys soccer team, including keeper Trevor Rush (third from right) pose for photos after capturing the District 1-4A title on Saturday, Nov. 14, 2020. (Kev Hunter/MediaNews Group)

MIDDLETOWN >> For a few fleeting seconds, it appeared Pennridge was the District 1-4A Boys Soccer Champion.

A penalty kick by Ben Scary found its destination in the lower left corner of the Neshaminy net, giving the Rams a 1-0, double-overtime victory over the Skins.

But it was not to be.

Pennridge was called for encroachment (one of its players stepped into the box too soon) and the goal was waved off.

The final 40 seconds of the second overtime ticked away, sending the contest to penalty kicks.

The Skins seized their opportunity, battling to a 4-2 edge in PK’s — the final one booted in by keeper Trevor Rush — and Neshaminy rode into the evening with the District 1-4A Title.

Said Rush: “Everyone played their part.”

And Rush played two, knocking in the final PK and also doing a tremendous job in net. He stopped one of Pennridge’s attempts in PK’s (another Ram PK sailed high).

“”We had a lot of guys step up,” Rush said. “That was a good team we beat, and they were here for a reason.”

Rush — a good word for what he provided when his clinching PK found the back of the net — heads to the state semifinals with his teammates to take on Emmaus.

“It’s the best feeling ever,” he said.

The Rams had their hearts broken not once, but twice.

The first came when Scary’s goal was waved off, and then when Rush’s attempt ended things soon after.

It was the finest season in Pennridge boys soccer since 1998. That team reached states, and Pete Valimont — now the head coach — was a junior on that squad.

“It’s bitter,” he said moments after the loss to Neshaminy. “We had it, and had it taken away…

“We battled them. Unfortunately, we didn’t do a good enough job in penalty kicks and they did.”

Gavin Rowan hit the left post for Neshaminy. Rush then came up with a big save, stopping Scary.

“(Rush) made a good save. We wouldn’t be here if it were not for Ben,” Valimont said.

Jason Spencer went left to put Neshaminy up 1-0. An attempt by Aiden Castle sailed high and then Neshaminy made it a 2-0 advantage when Mike Albarran knocked a ground ball into the left corner.

The Rams cut it to 2-1 when Colin Monahan drilled a shot into the upper left corner, but the Skins went up 3-1 on a shot by Ryan Shoeneman.

Carson Hasenmeyer came through for the Rams to make it a 3-2 difference, but Rush’s shot sent Neshaminy to states.

It was the third straight district appearance for the Rams, who got several key stops throughout the evening from keeper C.J. Dimmick.