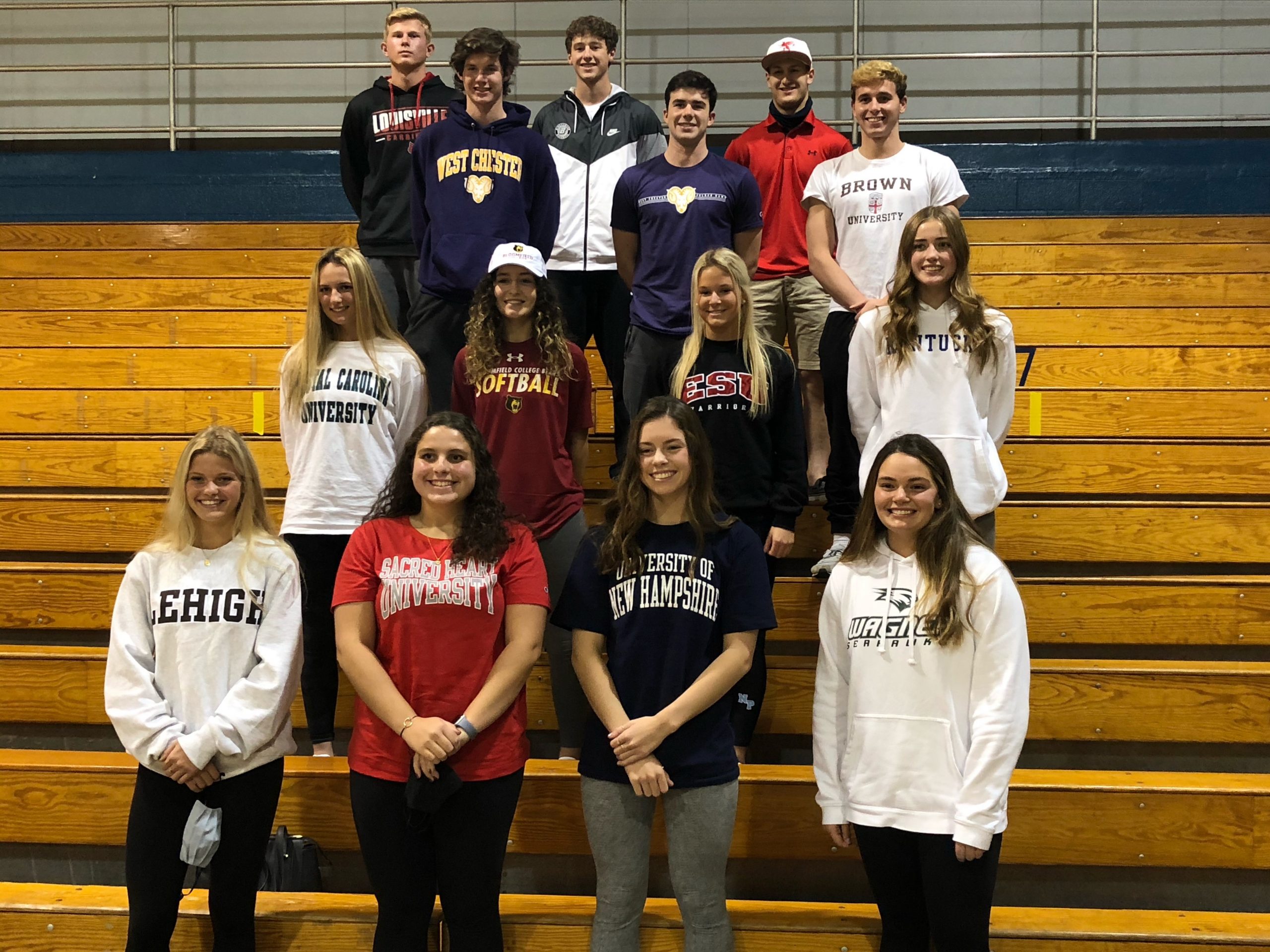 TOWAMENCIN >> Most every senior athlete at North Penn could point some way the effects of COVID-19 impacted them over the last eight months.

The already difficult task of proving themselves and being recruited to play in college only got harder but the truly dedicated found a way to fight through it. Coaches, families and administrators all played a part too, but the final effort always comes down to the individual athletes.

Thursday, 14 North Penn seniors were recognized for their accomplishments in a signing day ceremony.

Knights senior Josh Jones, an all-state boys’ soccer player, made his commitment to ACC power Louisville official, giving the Cardinals a versatile 6-foot-4 presence on the field. North Penn coach Chris DePeppe called Jones one of the most complete players he’s ever had but also lauded the team captain for his willingness to put team in front of personal accomplishment.

Jones said his favorite memory at North Penn was the entirety of his junior year, where he helped lead the Knights to their first District 1 and PIAA titles.

Nick Clark saw his junior swimming season cut short on the final day of the state meet, but only after he had recorded a significant personal achievement with a personal best time in the preliminary round.

A capable sprint swimmer and relay member, Clark opted for the athletic and academic challenges of the Ivy League and will continue his career at Brown. Clark cited the team’s coaching staff as a main draw, adding they were interested not only in his ability but what he wanted to do with it in and out of the pool.

“The team is the best part of my life here at North Penn,” Clark said. “I was new to North Penn in ninth grade and coming to a school this big is not the most comfortable thing but being able to spend every day with my closest friends in a sport I love, it made the stress of moving to a new school so much easier.”

North Penn’s aquatics programs are among the state’s best so no surprise they were well-represented on Thursday.

Max Bachman signed with West Chester to continue his career. It didn’t take the senior long to make an impact with the Knights swimming and diving team and has been a postseason distance swimmer since his freshman year.

“It was one of the last meets my freshman year, I got my first district cut and was able to swim at districts and in states in the 500 freestyle,” Bachman said. “I hadn’t been swimming distance the entire year, I don’t think anyone, myself included, expected me to do that well but I got the district cut my second time swimming it and looked up to see everyone cheering for me.”

Senior Maddie Fritz, who was part of a state medal relay team last season, chose the University of New Hampshire for its team atmosphere but also a strong exercise science program that she hopes to major in.

“I learned a lot at North Penn but the biggest thing is that having goals and working toward them can get you anywhere,” Fritz said.

Kaelan Daly easily could have opted to be an individual swimmer and challenged for state medals, but chose to put her skills to use as a relay swimmer that not only led to those teams doing well, but the overall team tying for a state title in last year’s shortened season. Daly’s talent and her unselfishness will be an asset for the University of Kentucky the next four years.

“My teammates have become lifelong friends and we’ve made so many memories together,” Daly said. “A lot of people may think of swimming as an individual sport but it’s not. I realized by pushing my teammates every day at practice and having them push me, it’s a team sport and we all have to succeed together if we want to succeed as a team.”

North Penn’s water polo program is a yearly state contender as well and it’s no surprise plenty of former Knights are now on college rosters. Elizabeth Koerper is the latest, signing with one of the top programs on the East Coast in Wagner College.

Koerper, who hopes to major in business, said the mix of an outstanding program and location in New York for academic pursuits was too much to pass up.

“North Penn Water Polo has taught me the value of work ethic and love of the sport,” Koerper said. “I learned a lot from my coaches and I grew to truly love the sport. We made it to states my four years and won three times, so it’s special to see how successful we can be as a team.”

Like North Penn’s water-based programs, the Knights’ baseball program has put a consistently high standard of performance on the field, which has led to numerous players moving on to the college level. Despite losing their 2019 season due to COVID-19, that tradition hasn’t slowed down with the Class of 2020.

“What I’ve gained most is a better work ethic,” Sullivan said. “I learned the importance of the weight room but also taking criticism in a productive manner.”

Pitcher Mike Lennon didn’t have a chance to establish himself as a top starter in 2019, but the lefty will be joining a top Division II program in West Chester where plenty of former Knights have gone on to do big things.

“I’ve gained a lot of discipline through North Penn baseball,” Lennon said. “Last year I had the accomplishment of making all our morning lifts so the biggest thing for me was learning discipline and how to represent your school and team on and off the field.”

Manero was particularly proud to recognize senior Colby Seelig, who not only lost his junior season but had to battle a health issue that left him unable to even play the game for several months. Seelig, who has signed with Chestnut Hill College, said he was just grateful there was a program out there willing to give him a chance.

“He really is a fighter,” Manero said. “Colby fought through all of it and when he finally showed up ready to swing a bat and do everything athletically, it really looked like he never missed a beat. He lost a lot weight and muscle mass but it seemed like he got it right back and nobody recovers like that unless they work hard and put the time in.”

Bus rides are an integral part of any high school team and field hockey seniors Eleni Kountroubis and Megan Albert both listed them, and their team’s singing, as their favorite memories.

Kountroubis, a three-year starter, will head to Lehigh after scoring 19 goals with eight assists in her time with the Knights.

“I found my closest friends, it’s the biggest reason why I started playing field hockey here at North Penn in the first place,” Kountroubis said. “I started in eighth grade because all my friends played and I grew such a love for the sport.”

Albert, a tough defender, has signed with Sacred Heart. The senior, who hopes to major in Marketing or Communications, said the proximity to New York was a pull on top of all the university and team had to offer.

“The biggest thing I gained from North Penn field hockey is a second family,” Albert said. “You have 30 other sisters when you’re on a team. We’re all so close, we text each other all the time, they’re the ones who make you want to go to optional practice or see on a Saturday morning even if you’re tired from the night before.”

Kloey Carminati’s emergence as a clinical scorer was a key development in North Penn girls’ soccer’s state playoff run last fall and while the Knights didn’t catch many breaks this season, the forward continued to set the right example. She has decided to play at East Stroudsburg University

Coach Mike Rio said he wasn’t surprised to see Carminati opt to play in college and called the forward a model for her younger teammates to follow because she never stops working.

“I learned the value of dedication and keeping that determination throughout a season,” Carminati, who recorded a hat trick in NP’s first round state win last year, said. “I had so many teammates that have turned into long-lasting friendships and coaches I’ll always remember.”

Rounding out Thursday’s signees were a pair of softball players who have already left a large impact on the program even without having their junior season.

Carley DiGiuseppe went from the team’s DP to starting right fielder and first team All-SOL selection in a sophomore year where she batted .323 and helped the Knights to the District 1 final and PIAA quarterfinals. The senior, who delivered a game-winning double against Hatboro-Horsham that year, has signed with Bloomfield University.

“North Penn softball taught me leadership and has given me the determination to not give up when things get hard,” DiGiuseppe said. “It’s also helped me grow as a person.”

Knights coach Rick Torresani has had a lot of good players come through his program but in his estimation, none have been better than Mady Volpe. In just two years of competition, the all-state pitcher owns numerous program pitching records and has a 38-6 record, two no-hitters and 418 career strikeouts.

Volpe, who has signed with Coastal Carolina University, is also a Carpenter Cup champion and as a sophomore, struck out 26 batters in an 11-inning win over Central Bucks West which calls her current favorite memory with the program.

“North Penn has taught me a lot, but the most important thing I’ve taken is the family culture aspect of the team,” Volpe said. “We treat everyone on the team as family members and we’re always there for each other no matter what.”