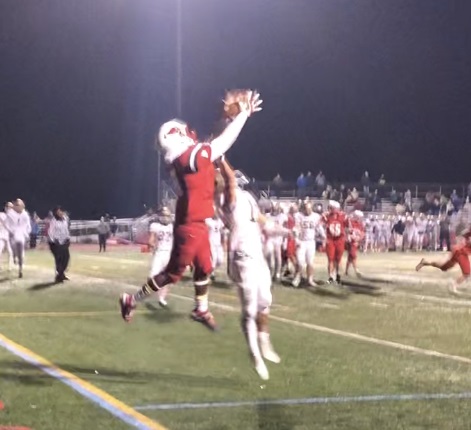 UPPER DUBLIN >> Upper Dublin head coach Bret Stover gathered his team after their 29-8 District 1-5A championship win over West Chester Rustin Friday night at Upper Dublin High School. After a quick postgame speech, it was time to celebrate. He called senior Micah Bootman forward to grab the trophy and bring it back to his teammates.

“He’s the leader without a doubt,” Stover said. “He’s our heart and our soul.”

“It just shows my leadership role on this team and how I have an impact on the rest of the team,” Bootman said. “I try to preach that at practice and show them the right steps. I try not to slack off in practice.”

Upper Dublin Senior @BootmanMicah presents the District I trophy to his team pic.twitter.com/ghPApHzidl

Bootman certainly didn’t slack off for the top-seeded Cardinals in the district championship game.

Defensively, the two-time All-League defensive back made an impact the first time he got an opportunity. Rustin’s first pass attempt didn’t come until the second quarter and it went at Bootman, who came away with an interception.

Bootman was targeted four times total in the game. The second was a 3rd-and-6 in the third quarter where he knocked the pass away. He allowed an 11-yard completion in the fourth quarter and the final throw in his direction was picked off by Chris Kohlbrenner, who was right alongside Bootman in coverage.

“It’s not very often teams throw to my side,” Bootman said. “When the ball is in the air I’m just a ball hawk. If it’s in the air I have to come down with it or nobody does.”

“If (our opponent) has a good receiver, that entire side of the field is locked down,” Upper Dublin defensive coordinator Dave Sowers said. “If not, (Bootman is) roaming the middle.”

He started just as fast on the offensive side of the ball. The Cardinals first offensive play of the game was an 18-yard connection between quarterback Colin O’Sullivan and Bootman. Bootman finished the game with five catches for 92 yards.

“It’s just a team effort,” he said. “I was getting open and Colin – he was hitting me. It was just that simple. It was exactly what we worked on in practice.”

“He’s a great receiver,” O’Sullivan said. “I spent a lot of time working with him in the offseason and I’m confident throwing to him that he’s going to catch it.”

Bootman had two big catches in the third quarter. The first was a 12-yard grab on 4th-and-6 to extend a 14-play drive that ended with the district-winning touchdown. On the Cardinals next possession, with a 14-8 lead, the upperclassman made a beautiful over-the-shoulder grab on 3rd-and-4 for 40 yards.

The longest offensive play of the night set up 1st-and-goal. Three plays later, on the second snap of the fourth quarter, Bootman took a handoff and cut left, stiff-arming a defender to the ground before scoring from two-yards away.

The Cardinals went right back to Bootman on the two-point conversion to extend the lead to 14, 22-8. O’Sullivan threw a jumpball Bootman’s way and he grabbed it over the defender for the conversion.

Bootman, who else, gets the two point play pic.twitter.com/32KTtgqpmu

“We gave him the ball to do everything,” Stover said. “He’s our playmaker … Our sophomore quarterback played well tonight, got him the ball, put it in spots for him to make plays – he high-pointed a couple balls he was out of this building. He was dunking the basketball is what it looked like out there. It was so much fun to watch him compete – he’s a competitor.”

Bootman’s impact goes beyond what he does on the field. He’s one of the few veterans on a young defense and is a main reason why his teammates and the defense as a whole are playing at a high level.

“He’s been playing since he was a sophomore,” Sowers said. “He was with that district championship team then. Over the two years to now, he’s just a leader back there. He’s putting kids where they need to go. He’s just a great leader – he really is.

“We start two freshmen and two sophomores on defense. It’s Micah in practice who says, ‘You can do this.’ He’s a special kid.”

Bootman is one of a few players to play significant snaps for both the 2018 and 2020 Upper Dublin district championship teams.