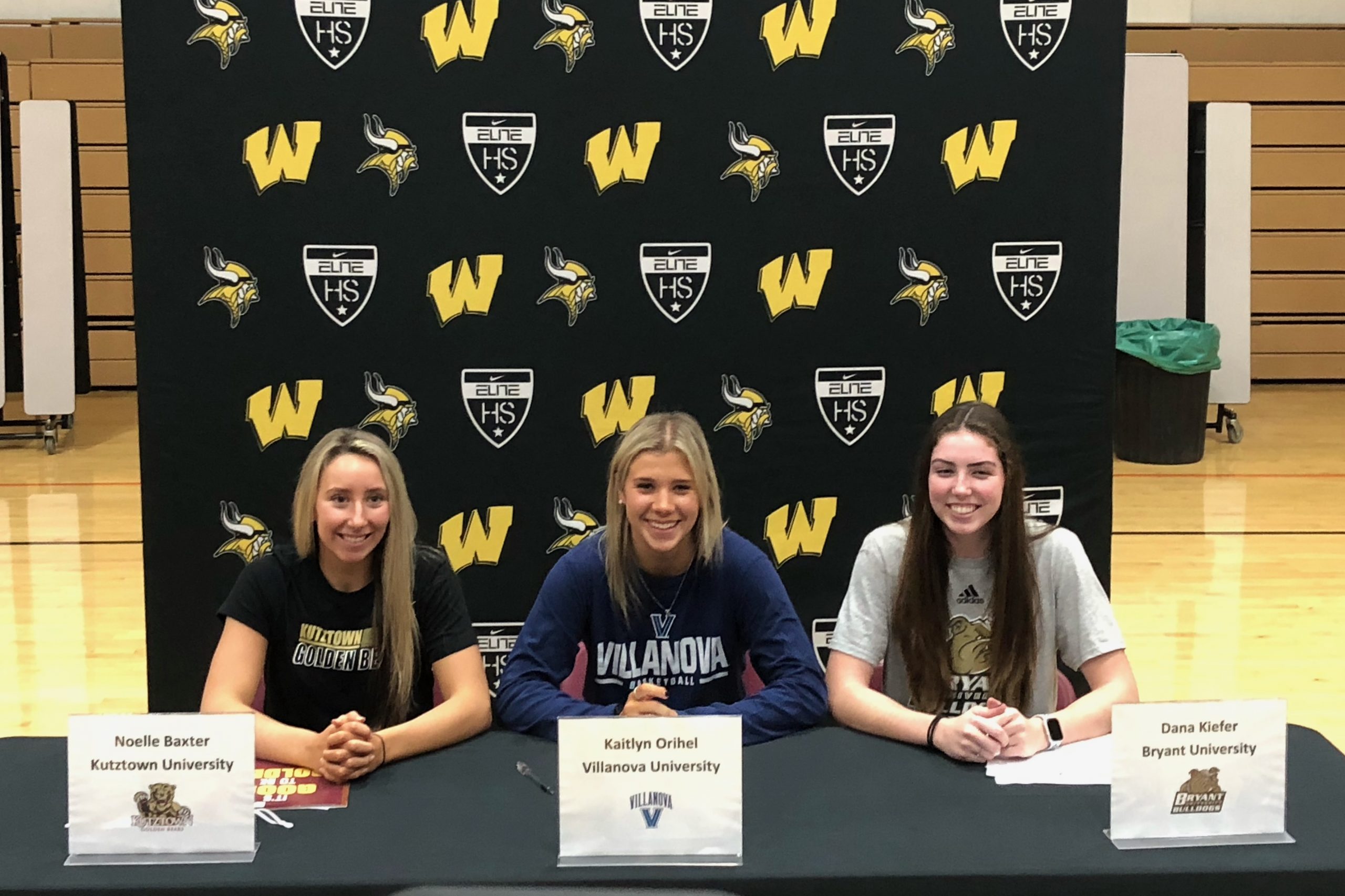 WARMINSTER >> Among the many things Archbishop Wood’s girls basketball program does well is sending its players to the next level.

The Class of 2020 is no exception and once again, the Vikings are putting some talented players in the college ranks. Wednesday, the team’s three senior captains inked their national letters of intent and made their choices official.

With that out of the way, Kaitlyn Orihel, Noelle Baxter and Dana Kiefer are hoping to end their careers with some titles.

“It’s such a relief, when you verbally commit, it’s like the practice run,” Orihel said. “Now, we can take a deep breath and know it’s done. It’s really exciting.”

Orihel, the PA Sports Writers All-State Class 5A Player of the Year and Reporter/Times-Herald/Montgomery Media Player of the Year for the 2019-20 season, will be staying close to home after signing with Villanova on Wednesday. The senior guard, who surpassed 1,000 career points last winter, committed to the Wildcats in March shortly after the PIAA season was halted due to COVID-19.

Villanova is set to begin its first season under coach Denise Dillon after longtime coach Harry Perretta retired at the end of last season. Orihel said the change didn’t deter her at all, as Dillon had also recruited her at Drexel so they had a good relationship to begin with.

It probably wouldn’t have mattered anyway, as ‘Nova was Orihel’s choice for a while.

“I first visited in seventh grade with my AAU team and just fell in love then,” the guard said. “The more I learned about the program and the academics; I knew that’s where I belonged. Every time I walk on campus it just reinforces it’s the place for me.”

Baxter will be the latest addition to the local contingent at Kutztown, where she’ll team up with former Viking Annie Whalen and St. Basil Academy grad Casey Remolde. Additionally, Baxter will join two of her AAU teammates in St. Basil senior Shannon Remolde and Pennsbury senior Bella Arcuri in the Golden Bears’ recruiting class.

A versatile utility player, Baxter does a little bit of everything for the Vikings from shooting, passing, rebounding and defending. While she had some other options to weigh, including a lot of interest from Maine, the forward felt it was important her family could come see her play and didn’t want to make a choice based on a division level.

“Being that underdog, Dennis Rodman type of player, it can be hard sometimes but I really like getting to work for my teammates,” Baxter said. “It’s not all about what division, where you’re playing or the big names, it’s about what’s best for you. You need to find good coaches and not decide just on the big name, it has to be right for you.”

Kiefer joined the Vikings last season after transferring from the Pennington School and fit in right away as a key reserve where her size at 6-foot-2, outside shooting touch and team-first mindset blended well with Wood’s style of play. The forward also played AAU for the Mid-Atlantic Magic, coached by Wood coach Mike McDonald, this summer where she was teammates with Baxter .

Everyone’s recruiting path is different and Kiefer’s road to Bryant started with a Twitter follow. The Bulldogs actually followed Kiefer, which piqued the forward’s interest and soon led to a scholarship offer and commitment.

“I really liked the coaching staff there, it felt like home and they have a record of developing players at my position so I felt by going there, I would only get better,” Kiefer said. “I decided I wanted to play in college when I came to Archbishop Wood and I knew Coach Mike could bring me to that level and help me get the opportunity.” Baxter, Kiefer and Orihel, who played for the Philly Belles, all played good AAU competition but also credit the coaches at Wood for their improvement as players during their time with the Vikings. Kiefer knows she’ll have a bigger role with the team this winter, but feels prepared for it after just one year with Wood.

“It’s crazy how much I feel like I’ve improved,” Kiefer said. “I think I’m better mentally and physically and I’ve learned to be a better teammate, a better individual player and a better team player.” The trio of seniors, along with junior Ryanne Allen, will serve as the Vikings’ co-captains this season. Last year, a promising state title run was derailed by the shutdown and after back-to-back losses in the PCL title game, all the seniors want is to go out with championships.

It’s the only thing missing from their otherwise loaded resumes but the seniors aren’t the only ones who want to lift trophies later in the winter.

“This year’s different, we have to preach being careful because we don’t want to see our season ended by something off the court,” Baxter said. “We just want to win. No matter what the season looks like, we want to win. It makes us work that much harder, even in practice every day. I just don’t want that feeling again.”

While the three seniors are excited for the next level, whether it be traveling the country, playing with or against former teammates and other opponents from prior stops or facing the top competition available, they have unfinished business with Wood to take care of first.

“We have a really committed team this year and everyone works hard,” Orihel said. “That makes it easy for us as captains, but we’re still looking to set the example for the younger girls so that when we’re not here, they can continue the legacy that Wood has.”