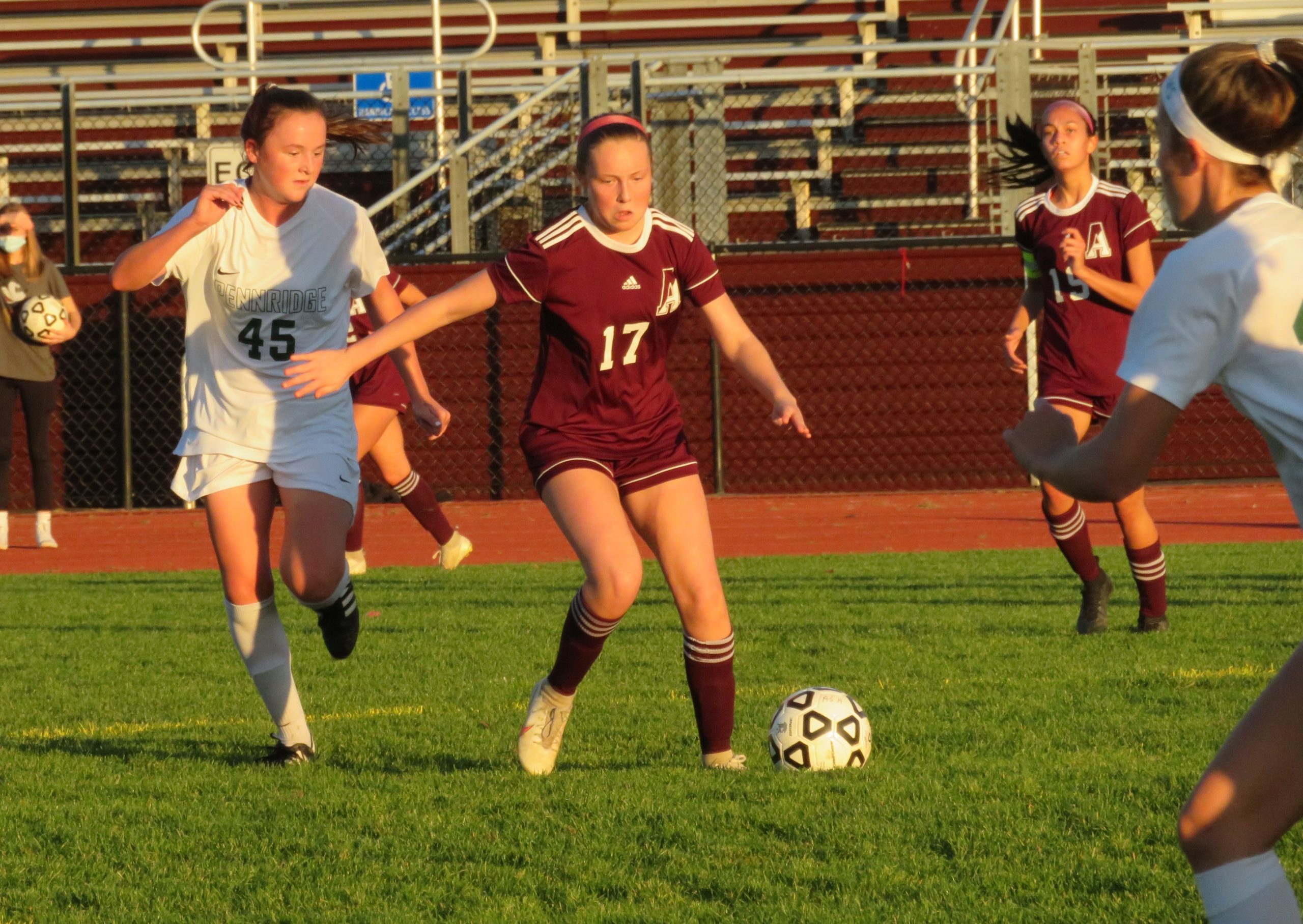 Abington's Maura Day (17) tries to possess the ball in front of Pennridge's Lindsey DeHaven (45) during their District 1-4A semifinal on Tuesday, Nov. 10, 2020. (Andrew Robinson/MediaNews Group)

From a foul not going its way to a pair of goals given up in 90 seconds, the Abington girls soccer saw a one-goal game turn into a three score deficit in a flash Tuesday afternoon. Of course, that’s what Pennridge tries to do to teams, even if the Rams were slow getting to that point.

A key five minutes, a needed lift from the bench and solid defense helped the No. 3 Rams top the No. 2 Ghosts 3-0 in their District 1-4A semifinal, sending Pennridge back to the district title game for a second straight year.

“Our first half was kind of slow and we all agree that’s something that can’t happen in the future because of how far we’ve come and how far we want to go,” Pennridge junior forward/midfielder Riley Hepler said. “After the first half, we were on the same page of where we needed to be. We put our heads together and played with everything we had because this could have been our last game and that was the last thing we wanted to have happen.”

The Rams scored 10 minutes into the game, but they looked far from the dynamo offensive team that topped Pennsbury in last week’s quarterfinals. A free kick from senior Lindsey DeHaven, with a timely back-heel flick from Leah Malone, set up freshman Anna Croyle for a one-time blast at the far post.

Pennridge coach Audrey Anderson stresses to her players that if they lose the ball, they need to immediately pressure to get it back.

Tuesday, that didn’t happen nearly enough in the first half and Abington was fighting just as hard to keep its season alive. The Ghosts had some chances, including a free kick by Maura Day that struck the crossbar but struck out in trying to level the game at the break, much to Anderson’s relief.

“We should be thanking Abington that it was 1-0 at the half, they totally had us in the first half and it was a little frustrating to watch,” Anderson said. “I wasn’t really sure why we weren’t pressuring like we normally do, if it was nerves or us being defensive-minded but we had some players pick it up in the second half.”

Hepler, who starts at center forward but also plays center mid was among the Rams players to pick up the pressure and intensity in the second half, along with freshman Sophie Craig and sophomore Joey Tomlinson off the bench. Still, it took time for their efforts to trickle down to the rest of the team and Abington was chasing a much-desired equalizer.

With 28 minutes left in the game, senior Casey Touey went down fighting for a ball with Pennridge’s Casey Malone in the box. The whistle blew, but instead of Touey drawing the penalty kick, the official pointed the other way for a Rams free kick.

Two minutes later, Hepler freed herself up for a shot and an unfortunate bounce right in front of goal caused the ball to slip by the keeper for a 2-0 Pennridge lead. A minute later, just after Day blasted a shot high, Craig came down the field and ripped a shot from the top of the box that chipped the keeper for a three-score advantage.

“As a forward, I was finding a lot of gaps and we all found success when we started pressuring the ball fast,” Hepler said. “As a whole, our forwards and midfielders all started pressing together which I think led to Sophie’s goal.”

GIRLS SOCCER 24:24 2nd half: Pennridge 3, Abington 0
Sophie Craig gets free and finishes the run with a chip pic.twitter.com/IQFEB4fRhF

“Once someone on the team gets hyped up, they get everyone on our team hyped up and we starting working better as a team, like way better, and we go from there,” Craig said. “The coaches tell us to find the ball and get teammates involved. They tell us what to do, we do it and it gets everyone going.”

The loss ends a terrific season for Abington, which captured the SOL Liberty title and finished as one of the last four teams in the district. Coach Rick Tompkins felt his team’s effort was what it needed to be and credited the Rams not only for punishing mistakes but their swarming defense.

“They’re a good team, I have a lot of respect for them and the way they play the game,” Tompkins said. “We made mistakes on execution but we had chances. Maura hit a crossbar in the first half, who knows, but we needed to pinch one and we knew it.”

Pennridge’s defense was outstanding as well. The back four of Kera Dam, Croyle, Cady McKean and Casey Malone didn’t try to do it as four individuals, but one group of four. Malone drew the assignment of Touey on the flank and the freshman held her own with her teammates having her back.

Likewise, any time Ghosts forwards Lesha Karaba or Piper McGinley went toward goal, the Rams seemed to materialize extra defenders from nowhere. Late in the first half, Karaba had a good run and looked to be in if she could get past McKean, only for Dam to come rushing back to disrupt a touch and win Pennridge a goal kick.

“We knew how good they were up top and we talked about making sure we didn’t defend 1-v-1,” Anderson said. “We got caught a couple times but Anna and C-Mac did a good job covering a lot of ground and Casey Malone should feel great about herself, to defend Casey Touey the way she did was amazing.”

Abington loses a strong senior class that won two conference titles but also set the tone for this fall with their leadership and unselfishness. Touey gutted out the last few matches with an injured ankle, Abby Bautista worked to return from a knee injury and Ally Holden was a rock defensively while sharing captaincy.

Karaba, who had her best season as a Ghost, Camille Mugnier and Myana Bebee-Gomberg round out the senior class for Abington. The Ghosts have some quality pieces back like Day, McGinley, Caroline Hughes, Carley Slavin and Ashley Reilly among others but as much as that, their strength this fall was in their unity.

“They’re upset today because for the seniors, it’s their last game but when they sit back and think about it, they should be pretty proud,” Tompkins said. “I’m going to remember the chemistry, this was a good group, they like each other and worked for each other. I’m hoping to capture it again.”

The Rams will host No. 5 Spring-Ford in Thursday’s district final. Pennridge, the defending district champion, will have its hands full with a stellar defensive team but the Rams are expecting to bring their best.

“It means a lot to us, every game could be our seniors’ last night and we want to do everything we can to get them to states,” Craig said. “We have to keep working as a team to accomplish our goal.”

Scary Good: Senior’s PK lifts Pennridge by Spring-Ford in 2OT, into District 1-4A final
Rowan’s brace, Neshaminy’s pressure too much for North Penn in District 1-4A semifinals