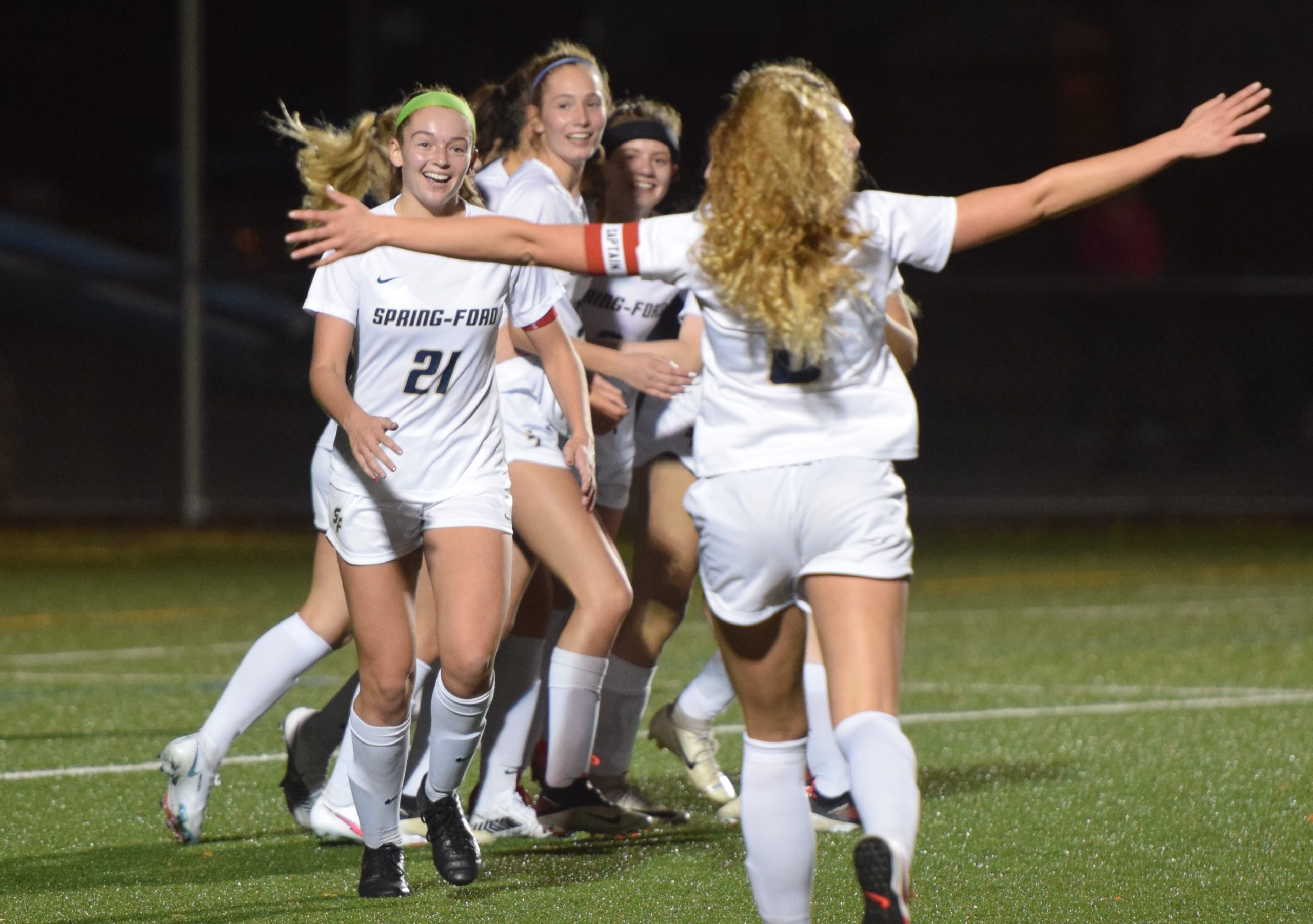 Spring-Ford's Molly Thomas, foreground, runs to join the celebration with, facing from left, Hope Flanegin, Raven Wellington and Reese Kershner after Thomas' corner kick was scored by Kershner in the second half against Downingtown East Tuesday. (Austin Hertzog - MediaNews Group)

The junior is equipped — both mentally and physically — to get into scrums in front of the net and make something happen. And on Tuesday in the District 1 4A Girls’ Soccer Semifinal, Kershner notched the game-winner in familiar fashion, powering the visiting Rams past top-seeded Downingtown East 1-0 to advance to the district final.

“Every time there is a corner kick, my goal is to get a head on it,” Kershner said.

“Most of her goals are off headers on corners,” added Spring-Ford head coach Tim Raub. “She wears that concussion headgear and I think she is like Superman when she puts it on. She is pretty fearless with it.

“She has a way of getting her head on the ball when we need it.”

The fifth-seeded Rams certainly did after battling the Cougars through nearly 52 minutes of scoreless action at DiSerafino Stadium. Now 13-1-1 overall, Spring-Ford will battle No. 3 Pennridge on Thursday for the crown.

“It’s my second time in the district final and I think we have a really good chance,” said Rams’ goaltender Riley Wallace, who notched her third straight postseason shutout this season.

“We have nothing to be ashamed of,” said East head coach Jason Luzak. “We went undefeated in the regular season, which isn’t easy. You don’t get through that by accident. Luck can only get you so far.”

The lone goal came about 12 minutes into the second half following a lengthy free kick by senior Hope Flanegin that had to be punched over the crossbar by East keeper Natalie Sims. On the ensuing corner kick, Molly Thomas’ boot into the box was directed in by Kershner.

“(Spring-Ford) put a lot of pressure on us,” Luzak said. “They were getting a lot of long-distance shots, and one of their direct kicks was parried by our keeper and the result was the corner kick that resulted in the goal. That was the difference maker.”

And even though the Rams finally had the lead, they didn’t let up. Spring-Ford worked for three more quality scoring chances over the next 12 minutes, forcing Sims to come up with saves, including one each from Flanegin and Kershner.

“Downingtown East had to open up and come at us more, so that generated more chances,” Raub explained. “We are a fit team, so late in games we’ve played really well.”

It was the Rams’ third consecutive 1-0 postseason triumph.

“We’ve been the 1-0 kids. We’ve been gritting out wins,” Raub said. “We like to move the ball and possess the ball, so one-goal games kind of happen for us as long as we do what we need to do.

“We have a stellar back line that doesn’t get the credit it deserves.”

The score was tight, but for long stretches especially in the second half, the Cougars had great difficulty getting the ball out of their own defensive end. Spring-Ford had a clear 10-4 edge in shots on goal, and generated nine of its 10 corner kicks in the second half. Downingtown East did not have a single corner kick.

“We certainly did not get as many opportunities as we needed, but the truth is that (Spring-Ford) is a strong opponent,” Luzak said. “We’ve had other games where we’ve had 15-18 shots, and in this one we had maybe five (actually four).”

In the opening 50-plus minutes, neither side was able to score, but the Rams had most of the top opportunities. The Cougars best chance came in the opening 10 minutes when Riley Scott and Wallace collided while racing to a loose ball, and it trickled out of bounds off Scott.

“I knew this was going to be close, and that one goal might be all we needed,” Kershner said.

“We knew (Downingtown East) was deadly on set pieces so we didn’t want to give up any corners,” Raub said. “The game plan coming in was to counter attack, and when you can get the ball wide like we did, you get the opportunities that makes us dangerous.”

Spring-Ford’s Reese Kershner, center facing left, gets a hug from teammate Mo O’Donnell after scoring a goal in the second half against Downingtown East. (Austin Hertzog – MediaNews Group)