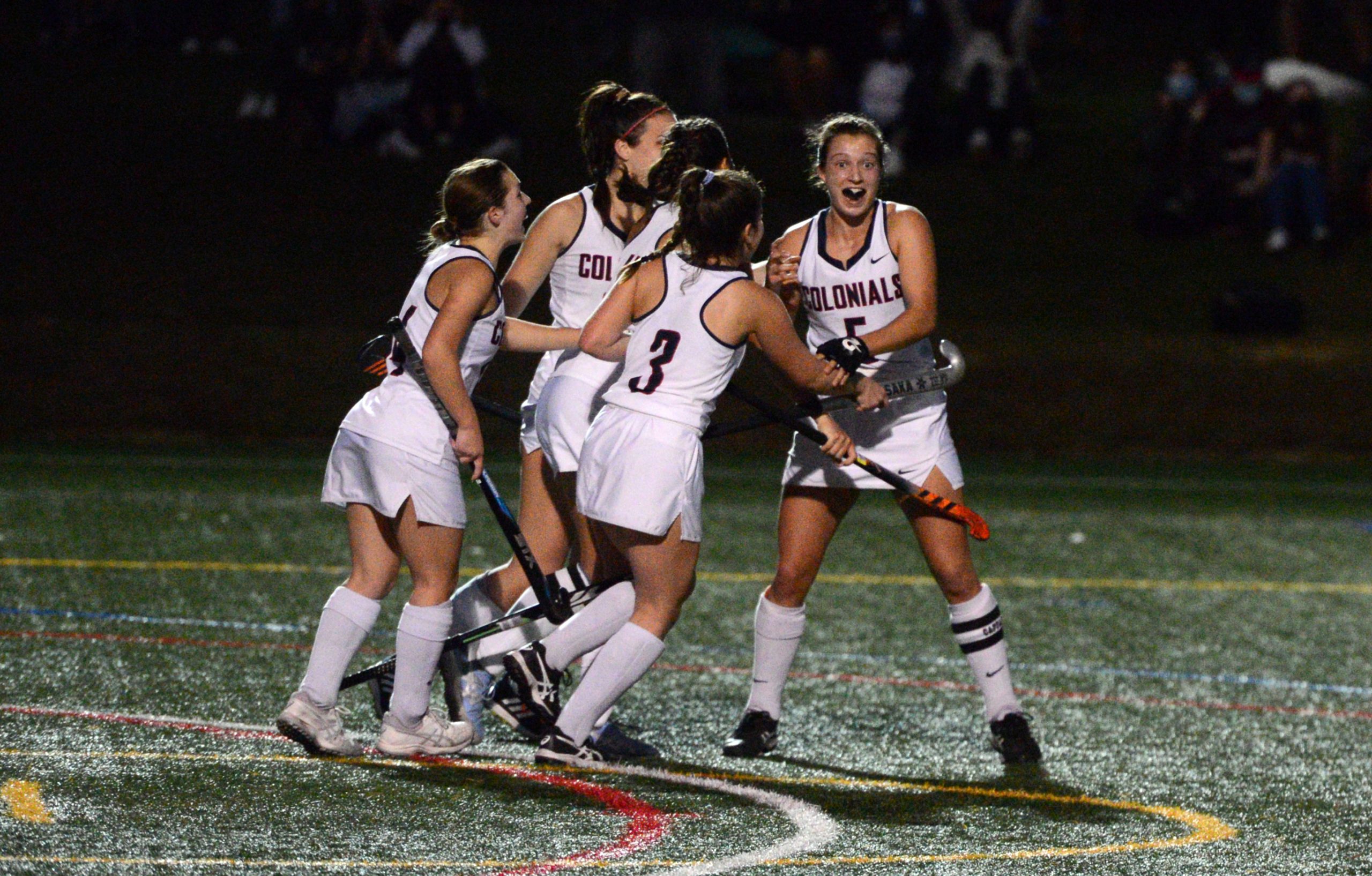 Plymouth Whitemarsh’s Kaleigh Missimer, right, celebrates her game-winning goal with her teammates Tuesday against Methacton in the District 1-3A semifinal at PW. (Owen McCue - MediaNews Group)

WHITEMARSH >> Plymouth Whitemarsh has struggled to score this postseason. After averaging seven goals per game during the regular season, the Colonials picked up a pair of 1-0 wins against Avon Grove and Kennett in the first two rounds of the District 1-3A playoffs.

When Methacton scored first in Tuesday’s semifinal, PW knew it couldn’t follow the recipe from the first two games. When the Warriors lead doubled in the middle of the third quarter, the Colonials knew it had to change fast.

Enter senior captain Kaleigh Missimer. Missimer scored a pair of goals to tie the game with less than five minutes remaining and completed the hat trick in overtime to send No. 3 Plymouth Whitemarsh to the district championship game with a 3-2 win over No. 7 Methacton at Plymouth Whitemarsh High School.

The overtime winner came on a penalty corner. Hailey Copestick sent the insert pass to Missimer at the top of the circle. The American University recruit worked around the first defender, dribbled right and sent a shot into the back of the cage to lift the Colonials to the district championship game for the second straight season.

“We actually never practice that,” Missimer said of the game-winning play. “I use it once in a while in other games and I tried it once today and that’s how I scored my first goal. I said, ‘there’s one less defender, I can probably do it again.’

“It wasn’t even about me. It was my whole team. We worked so hard to get here. I just thought of all them and I said, ‘I need to do this for them.’”

The Colonials (13-0) comeback started at the end of the third quarter. Similar to the game-winner, Copestick inserted to Missimer, who dribbled around the first defender and to her right. The horn sounded to signify the end of the quarter as Missimer finished the play. Her score made it 2-1 with 15 minutes remaining.

“That was huge,” PW coach Charise Halteman said. “It gave us some confidence. It made the game a lot closer, a little more manageable. We came out with a lot of intensity in the fourth quarter. (The first goal) was definitely a game-changer. (Missimer) played awesome today, throughout the whole game and showcased her poise under pressure, getting her eyes up and finding the corners of the cage.”

Missimer scores on the stroke, ties game 2-2 with five to play. pic.twitter.com/ZgmUnRNrHt

PW controlled the game for most of the fourth quarter, but couldn’t tie it until the final five minutes. With 4:53 left, the Suburban One League Liberty Division champions earned a penalty stroke. Missimer took her time and shot it to the right, straight into the goal, to make it a 2-2 game.

“I think we got a little tired,” Methacton coach Amanda Fuertsch said. “We had a couple too many physical mistakes, a couple mental mistakes here and there, that they were able to capitalize on, but overall I thought we had a good game.”

The momentum shifted back to the Warriors (10-2-3) in the final four minutes when PW earned a pair of cards – a two-minute foul at 3:56 and a five-minute foul at 3:33 – to play two girls down. Methacton controlled possession for most of the remainder of regulation, but couldn’t capitalize with a score.

“Having two people off, we were definitely able to get up and attack more,” Fuertsch said, noting that the one-player advantage isn’t as big in field hockey as it is in ice hockey. “We should have taken better advantage of those opportunities.”

Methacton started overtime with a 6-on-5 advantage for 1:33 before the five-minute penalty was over. PW wasted most of the 93 seconds, but the Warriors were able to earn a penalty corner. The shot went just left of the net.

After a bit of a back-and-forth, the Colonials earned a corner and Missimer caged the game-winner.

The Warriors controlled the early part of the game. They limited PW’s chances in the first half while Grace Shields scored on a corner with 6:54 remaining in the second quarter.

Methacton 1, PW 0 with just under seven to play in Q2. … Last game’s hero Grace Shields puts the Warriors ahead. pic.twitter.com/TW70WW7jlq

Alexa Kratz doubled the advantage with a reverse hit on a penalty corner in the third quarter. Kratz, also an American University commit, made it 2-0 with 9:09 remaining in the third.

Methacton’s Elise DeWan and Kratz both frustrated the Colonials in the second half by making defensive saves. DeWan’s came when the game was 2-0 late in the third quarter and Kratz kept it 2-1 early in the fourth.

“They both have had defensive saves earlier in the season,” Fuertsch said. “They know how to take care of each other.”

The Colonials will host No. 5 Central Bucks East, a 1-0 winner over No. 16 Central Bucks South, in the championship game Thursday.

The loss brings Methacton’s season to an end.

“The whole time when we were asking those questions, ‘Are we going to play’ we were preparing,’” Fuertsch said. “For it to get to this point – the district semifinals – they earned this. All summer, all season. They earned it to be here. It just stinks it didn’t get to go in our favor.”