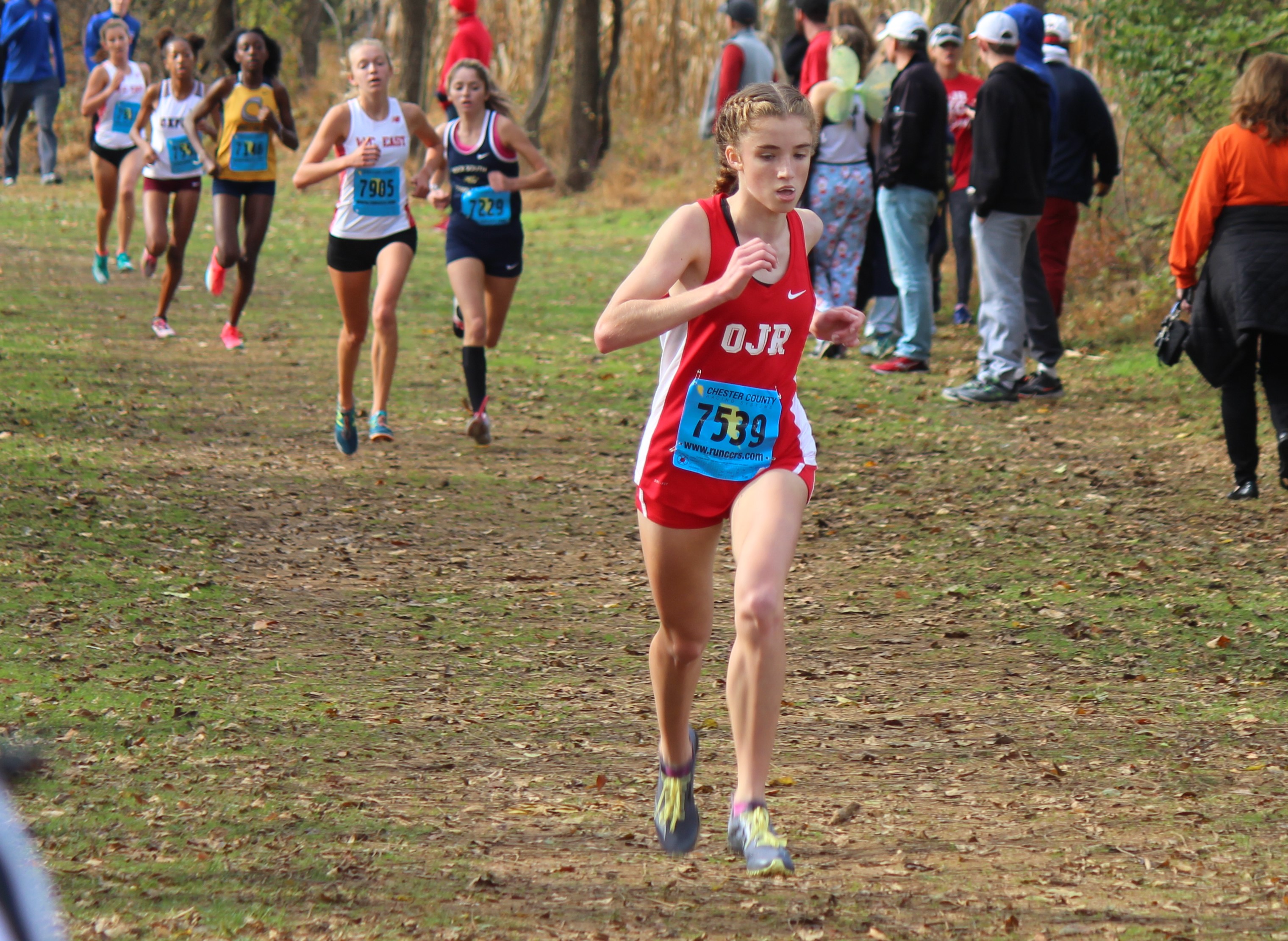 HERSHEY >> Weatherwise, it was an enjoyable day for some people to be participating in a cross-country meet.

Claire Zubey finished as a state medalist for the second time in as many years. The Owen J. Roberts sophomore, second in Monday’s District 1-3A race at Tyler State Park, placed 11th in a time of 19:46.

“It was hard,” OJR head coach Tim Marcoe said, citing the unseasonably-warm temperatures. “There were less kids running in a heat (30), so there was no pack to run off of. There weren’t any invitationals for the kids to run during the season.”

All that made Zubey’s performance stand out in Marcoe’s mind.

“With all the unknowns this year,” he said, “getting a state medal is something. A Top 15 is awesome.

Zubey, ninth in the 2019 state meet, ran in what Marcoe classified as the “fast heat.” She was District 1’s third-highest finisher. 1-3A champion Jenna Mulhern of West Chester Henderson was sixth (19:20) and Shana Kearney of Bensalem ninth (19:37).

“It showed her mental toughness,” he said.

Gianna Cagliola and Katy Todd placed in the top 25, Cagliola 22nd and Todd 24th. They finished within two seconds of each other, Cagliola clocking 21:00 on Hershey’s Parkview Course and Todd 21:02.

“It’s always a good day when you medal at states,” PJP head coach Lisa Cagliola said. “Considering we almost didn’t have season, we’re blessed to be at states.”

Gianna Cagliola, coming into states as District 1’s Class AA champion, enjoyed Saturday’s warm temperatures much more than the “29-degree wind chill” she described as being in place in districts Monday.

“It was definitely a lot easier to breathe,” she said.

Cagliola improved almost 10 spots from her 30th-place 2019 finish. Todd made an even bigger jump from 51st place.

“That was our goal since our freshman year,” she said of the girls’ medal finishes. “I was happy to do it, and Katy was, too.”

The PJP girls’ high state finishes came during a season abbreviated by the COVID-19 pandemic leaving them with a late start. Both juniors, they put the Golden Panthers’ immediate future on a firm footing.

“We still have a nice, young team,” Coach Cagliola said. “We’ll be back strong.”

Eric Muthersbaugh, a senior from Boyertown, placed 91st among the 3A boys with a time of 18:39. He had qualified for states with a 15th-place run at districts.

In boys 2A, Pottstown’s Darius Smallwood was 41st in 17:55. The senior was coming off an inspired run at districts, finishing one-tenth of a second behind race winner Elliott Puckett of Holy Ghost Prep (17:28.1).

NOTES >> Each division ran four heats at 15-minute intervals. Lisa Cagliola estimated the number of runners in each heat in the neighborhood of 30. … Jenkintown was team champion in boys 1A. The Drakes placed four runners in the Top 10, headed by Luke Miller and Carter Geer finishing in the Top Five. … The 3A girls had three freshmen place in their Top 10. as did the 2A girls.