Not so meaningless: Downingtown East takes care of archrival West 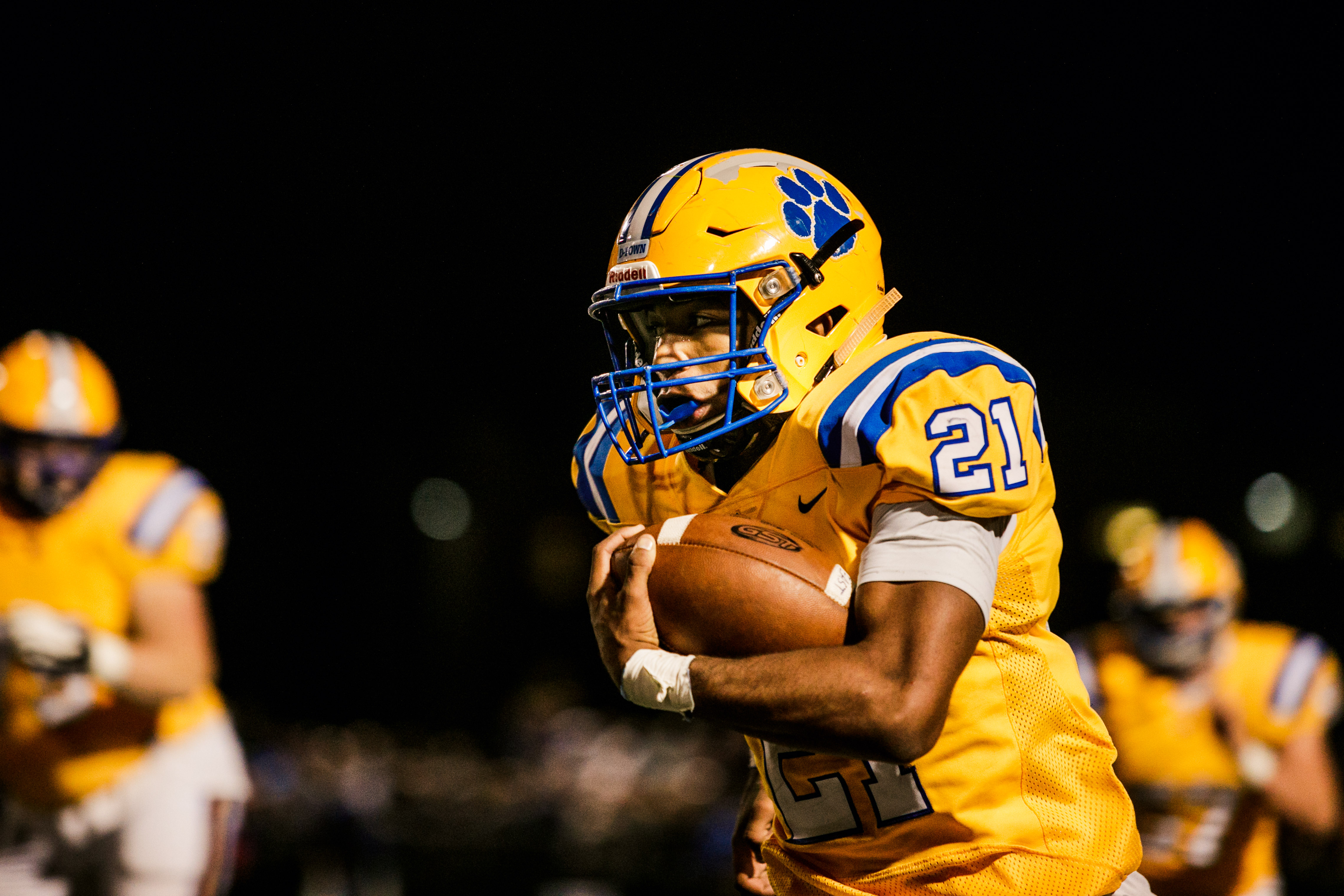 DOWNINGTOWN >> For the first time in memory, there were no postseason implications on the line when Downingtown East and Downingtown West renewed their passionate football rivalry.

But you wouldn’t have known it by the way the Cougars celebrated a 21-7 triumph over the Whippets Friday at Kottmeyer Stadium.

“We have a game scheduled Nov. 20th (at Quakertown) and we may have one the 13th, but you never know,” said East head coach Mike Matta. “Those games could be cancelled. I told our seniors that we aren’t guaranteed anything except (today).”

The Cougars scored three touchdowns in fewer than six minutes in the third quarter to overcome a seven-point halftime deficit. And when it was over, Matta directed his seniors to get a particular post-game photo.

“I wanted them to get underneath that (scoreboard) because they will remember that the rest of their lives,” he added. “In 30 or 40 years, they will look at that picture and remember this night. I wanted this for the seniors in the worst way.

“We finally played up to our potential. We’ve played well at times, but this is the first time that when the defense faltered the offense picked them up, and when the offense turned it over, the defense got (West) off the field.”

Running backs Josh Assante and Stanley Bryant combined for 287 rushing yards on 52 carries and two touchdowns for East. And a huge chunk of the yardage – 210 to be precise – came in the second half as the Cougars controlled the clock, and eventually the game.

“(East) got after it, they got the momentum and they physically beat us in the second half,” West head coach Mike Milano said. “They executed and I take my hat off to them.”

“This win means a lot to us,” said Assante, who finished with 150 yards on the ground. “I was glad to have Stan (Bryant) back and when we play as a team, we are almost unstoppable. When we run, we kind of feed off of each other.”

A senior, Bryant was out the two previous games with a leg injury. He rolled up 117 or his 137 rushing yards in the second half.

“Stanley (Bryant) not being around the last couple games, he’s like the soul of the team,” Matta said.

“I’m glad I was able to play and help my team,” Bryant added.

Trailing 7-0 midway through the 3rd quarter, East covered 58 yards on 10 straight running plays to tie it up on a quarterback sneak by Jamy Jenkins. And then in the next possession, the Cougars took the lead for good on a five-yard pass on fourth down from Jenkins.

Defensive back Cannon Lucas-Murphy then pounced on a West fumble, and a few plays later Bryant took it to the end zone on a nine-yard run to make it 21-7 in the final seconds of the quarter.

“The offensive line picked it up and we just ran and ran and ran,” said Assante, a junior.

“At the half, we knew we were making mental mistakes that were killing us,” Bryant added. “We thought if we played smart and hard that we got these guys because they aren’t as mentally and physically as strong as us.”

The East defense forced four total turnovers in the clash and surrendered just 165 yards of total offense, including a mere 27 after the intermission.

“We made a lot of mistakes,” Milano said. “But (East) outplayed us, out-coached us and they deserved to win tonight. They were better.

“In big football games, it takes physicality to win and we didn’t have it tonight. In the end it’s a physical game. You either block them or tackle them, or you don’t. It’s pretty simple. We didn’t do a good job of blocking, and in the second half we struggled to tackle as well.”

Each side turned it over in the early going, but neither could turn it into points. East’s Xander Hearns pounced on a fumble in West territory in the first quarter, but on fourth and two at the three, Cos Villari came up with a big sack and the Whippets escaped unscathed.

But in the second quarter, West staged an epic 15-play, 88-yard march that took over seven minutes on the clock. Wideout Julian Williams went the final 15 yards on a pass from Evan Wickersham.

The Cougars fumbled it away later in the first half and it was recovered by Nahsir Harris, but the Whippets failed at capitalize and turned it over one downs at the East 20.

Everything changed in the second half. East wound up outgaining West 295-74 on the ground.

“We wore (West) out. We kept punching away. We knew if we could hang in there and get through the first half. We felt if we kept it close, we’d be OK.”

Williams had five catches for 68 yards for the Whippets.

“We struggled on offense and our defense was on the field all night,” Milano said. “That makes it difficult.”