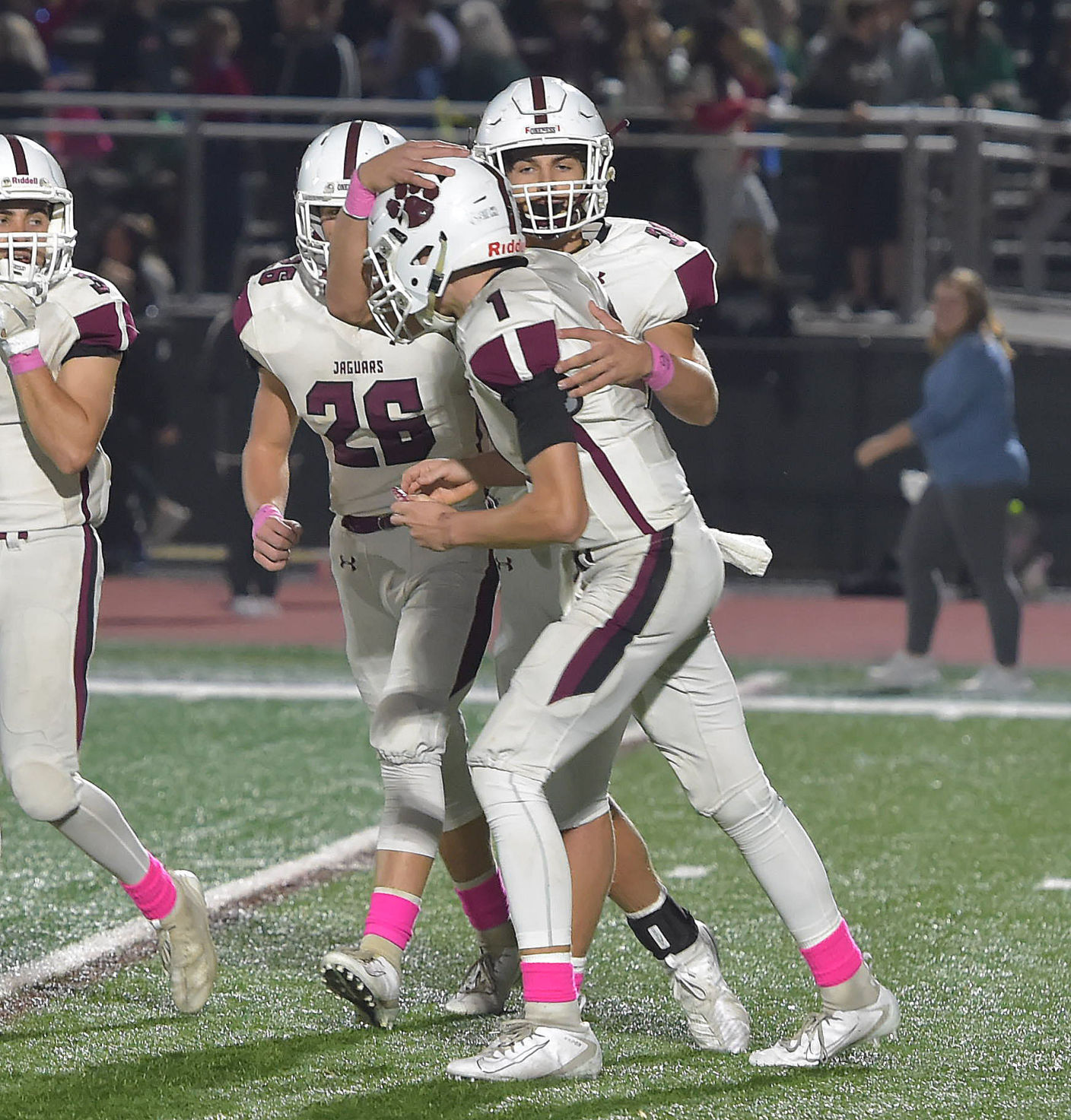 UPPER DARBY — In a season long or short, early or late or somewhere in the middle, no matter what the year or era, Mike Ricci knows the moment will arrive.

It will be then, and only then, that he knows what he has in his Garnet Valley football team.

In a Central League collision of programs at different points in development, Ricci’s Jaguars outperformed Upper Darby, 46-6, improving to 3-0. For the first 30 minutes, though, at least by Ricci’s analysis, the Jags were not quite themselves against the winless Royals

For that, his halftime address came through clear, even though his protective mask.

“We knew they were going to be physical, and they were even more physical than we thought,” said quarterback Kevin McGarrey. “They did an incredible job on defense. They did a good job stopping our play calls. They knew what we were going to do. But I thought in the second half, after the coaches got on us a little bit, and rightfully so, we did a great job of responding.”

With Julien Laventure, Justin Leo and Jihad Cave, among others, swarming on defense, the Royals made the dangerous Garnet Valley offense work in the first half, and were victimized mostly by big plays.

A 38-yard pass from McGarrey to Brian Bradley, and a 13-yard McGarrey run, put Shane Reynolds in position for a seven-yard touchdown run with 3:05 left in the first quarter. When Upper Darby lost a fumble at its 17, Reynolds capitalized with a 10-yard scoring effort eight seconds into the second quarter.

McGarrey’s 29-yard scoring pass to Will Wrzesniewski with 6:20 left before halftime inflated a 20-0 lead that was a little less than comfortable.

That’s when Ricci made his challenge.

“I didn’t think our guys had our best first half because Upper Darby played so well,” Ricci said. “But I was thrilled with the way we came out in the second half and executed our offense.”

McGarrey capped the first drive of the second half with a 14-yard scoring pass to Matt Murkowski, and Reynolds soon followed with his third touchdown, a 27-yard blast. Shane Mulholland’s two-yard touchdown run and Zach Liberatore’s fourth successful PAT built the lead to 40-0.

Bradley mixed a 60-yard run into the Jags’ 304-yard rushing night. Making efficient use of his eight carries, Reynolds chipped in with 68.

After going scoreless in their first two games under new coach Dave Barr, both on the road, the Royals celebrated a 50-yard touchdown run from Darryl Pollard Farmer with 8:51 left.

“I felt really good for the kids to finally put some points on the board,” Barr said. “And our defense came out tonight and did a phenomenal job of taking the game plan and executing. They played super hard and that’s what we asked for them.

“We’re still maturing. We’re super young. And Garnet Valley is one of the better teams we have seen in a while.”

The Jags showed that in the second half, finishing with a flourish with a one-yard David Torrens touchdown run with 3:07 showing.

“It was good,” Reynolds said. “It’s always good to have tests like this to see how your team is progressing.”