All the Wright moves as Haverford romps over Ridley 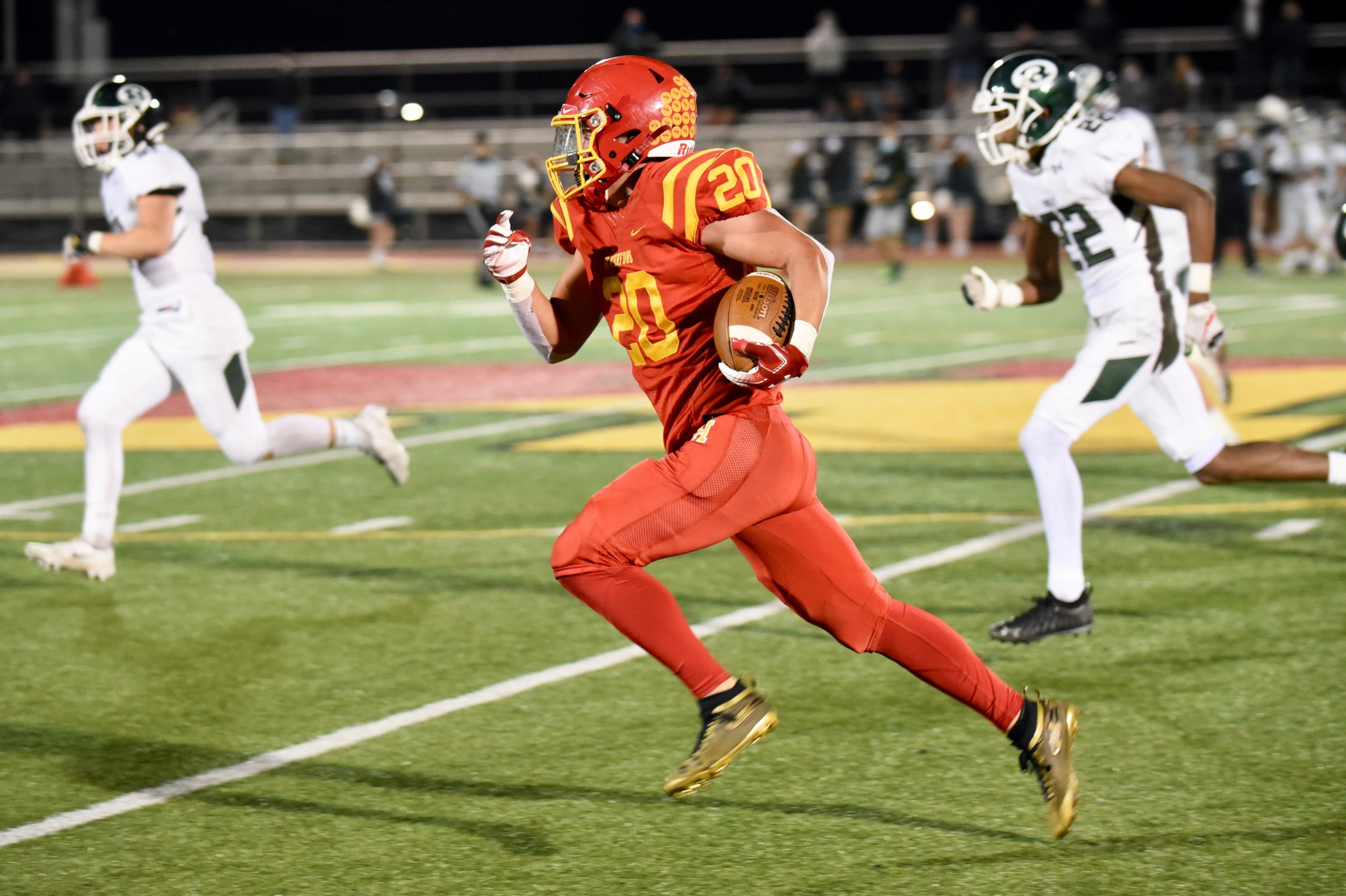 Haverford running back Jimmy Wright runs past Ridley defenders Friday night in a 33-3 win for the Fords. (Submitted Photo/Paul Bogosian)

HAVERTOWN — The scoreless streak ended at nine quarters but that didn’t diminish the precise work unbeaten Haverford did Friday night in a 33-3 Central League win over previously undefeated Ridley.

The Fords made big plays in all phases, senior Casey Gilroy catching a 14-yard scoring pass and ringing up a pick-six, and Jimmy Wright rushing for 165 yards on 22 carries, including a 65-yard scoring run.

The Fords (3-0) downed a punt at the 1-yard line of the Green Raiders, kept them out of the end zone on three shots from the 11-yard line and added to the eye-opening numbers they’ve put into the books in this pandemic-delayed season. They’ve outscored the opposition, 108-3.

“The best way to describe it is this game was won on Tuesday and Wednesday,” Fords coach Joe Gallagher said. “We had probably our two best practices since the season started and that’s why we started like we did. We’re very focused. We have a goal. We want to win the Central League and you have to go through Ridley to be able to do that. That’s a good team we just played. They have a lot of pride. They have a great tradition. They were 2-0 just like us. But our kids really stepped up. That’s why the practices were so good. We have a lot of respect for Ridley.”

The Fords took the lead on the game’s first possession, fullback Will Higson going the final yard after Wright turned the corner on a 29-yard run thanks to a devastating seal block by senior lineman Ryan Buckton.

It was 12-0 just six seconds into the second quarter when Gilroy hauled in a pass from Thomas Wright and used his size and strength to break a handful of tackles for a 14-yard touchdown.

The only issue at that point was the PAT operation, as Ryan Wellington missed his first attempt and had the second one blocked.

Wright set up his four-yard touchdown run with five minutes to go in the first half with a 30-yard run.

The Green Raiders (2-1) marched to the 11 of Haverford in the last 27 seconds of the first half but the defense clogged the passing lanes, Wright batting down one of John Heller’s throws in the back of the end zone to bring out the field goal team.

Chris Vinci delivered a 30-yard field goal to cut the lead to 19-3 at the intermission.

Ridley coach Dave Wood switched to quarterback Shaun Kennedy in the second half.

“We put the senior in, we just weren’t getting anything done,” Wood said. “We had the ball to start the second half and we wanted to put the senior in and give him an opportunity to see if he could kick-start it. That’s a position we’re still evaluating. We ran the ball well at times. But the quarterback is the key in this offense. We have to be able to throw the ball.”

Wright delivered a 65-yard scoring jaunt on the Fords’ first possession of the second half, breaking outside and running away from a sea of Green Raiders, including the group on the sideline in front of the bench.

Then it was Gilroy smartly stepping in front of a Kennedy throw and thundering 30 yards for the last Fords’ touchdown.

“He’s a playmaker,” Gallagher said of Gilroy. “He makes plays. He’s a threat. And Jimmy, in my opinion, is one of the best players in the league. He’s probably in the top five players in the Central League on both sides of the ball.”

In terms of style points, Gilroy rated the interception return ahead of the touchdown catch.

“Probably the pick-six because I got caught a couple times with a pick right at the one this season,” Gilroy said. “I really wanted to get in there. Great blocking. Just good defense overall. This win is huge for momentum. We’ll take it next week and the week after that and finish out strong.”

Jake Snell added an interception late in the game for the Fords, who despite losing a ton of starters from last season have won 14 of their last 15 games, including a pair of district playoff games.QV3