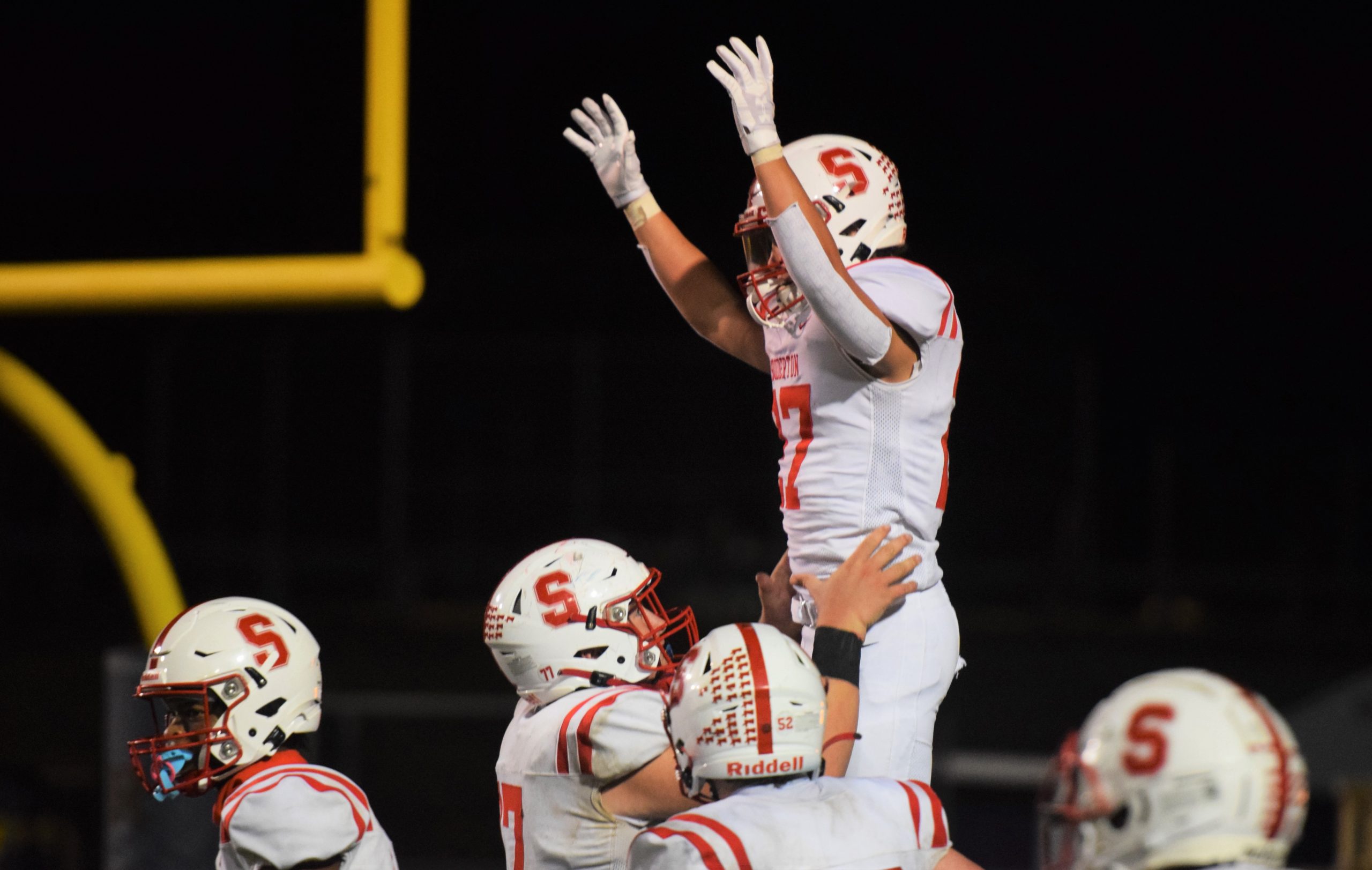 ROYERSFORD >> For the first 40 minutes, Souderton’s defense dominated their District 1 Class 6A semifinal against Spring-Ford.

The offense took it the rest of the way.

Quarterback Evan Kutzler led a nine-play, 62-yard drive highlighted by a 22-yard completion to Sean McGoldrick on a critical third down to seal Souderton’s 27-24 victory over the Rams and book a trip to the District 1 championship game next week at Pennridge.

Kutzler finished the drive with a three-yard touchdown run, putting the Indians ahead 27-17 with 3:21 to play. After Spring-Ford’s Gage Swanger returned the ensuing kickoff 91 yards for a score to bring the Rams within three, Souderton used its punishing running game, aided by a critical Spring-Ford penalty, to run out the clock and move onto next week.

“It was really our only good drive of the second half,” Souderton head coach Ed Gallagher said after the victory. “Fortunately, it happened at the right time.”

Souderton lets line lead the way into end zone on keeper to rebuild lead to 27-17, 3:21 4Q. Big response by Big Red after 17 unanswered by SF pic.twitter.com/7R6xTHTvlK

For most of the night, it didn’t appear the Indians would need any such heroics.

Souderton built a 20-0 halftime lead and staved off a six-minute Spring-Ford drive to start the second half when a fourth-down pass fell incomplete from the Indians’ four-yard line. But towards the end of the third quarter, Spring-Ford’s Zach Zollers finally got home and blocked a Souderton punt after a couple near-misses earlier in the game.

The Indians’ defense was further buoyed by forcing a 32-yard Alex Nadeau field goal, limiting Spring-Ford to three points on a drive that began at Souderton’s 15-yard line. But the fun was just beginning.

Souderton’s ensuing drive ended emphatically when Spring-Ford’s Nasir Cooke broke through for his second sack of the evening, forcing the ball from Kutzler’s grip and into the end zone, where Josh Hellauer corralled it to cut the Indians’ lead to 20-10. An Indians’ three-and-out followed, and Rams quarterback Ryan Freed found Zollers open down the middle for a 45-yard touchdown after a great play-action fake to bring Spring-Ford within a field goal with 7:21 to play.

Play action pass to Zollers over middle and TD for Spring-Ford. 20-17 Souderton 7:23 4Q and Rams are fully back in it pic.twitter.com/gG0KuCUlsA

“At halftime, I told them we couldn’t play any worse than we had in the first half,” said Spring-Ford coach Chad Brubaker. “Once we got some momentum, we really got things rolling and just ran out of time. The throw [Kutzler ] made on third down on their final scoring drive was obviously a killer.”

Truthfully, it had been a quiet night to that point for Kutzler and the Souderton offense, with the exception of punishing fullback Brayden Porter (18 carries, 130 yards, two TDs). The third-down pass to McGoldrick was only Kutzler’s fourth of the evening as Spring-Ford was able to limit Souderton to 234 yards of total offense.

The key to building the early lead was the excellent field position the Indians enjoyed thanks to their special teams and defense. Most of those advantageous starts were thanks to sophomore Shaun Purvy, who submitted punt returns of 30 and 38 yards in the first half, setting up both of Porter’s early TDs.

The first long punt return set up Souderton’s second drive at the Spring-Ford 39, where Porter wasted no time carrying off left tackle for a 39-yard score and a 7-0 lead.

The highlight of Souderton’s defensive effort came with only 17 seconds to play in the quarter when Elijah Cooks — playing with a cast on his arm — picked off a tipped pass and went 50 yards for a score toward the end of the first quarter to expand Souderton’s early lead to 14-0.

Two possessions later, Spring-Ford kicked to Purvy again, and the sophomore made the Rams pay, shooting up the middle on another punt for 38 yards to set up the Indians at the Rams’ 30. This time it took Porter two plays to power 27 yards through the middle to pay dirt, expanding the lead to 20-0.

Souderton’s Shaun Purvy (9) smiles toward the sideline after intercepting a pass against Spring-Ford in the first half. (Austin Hertzog – MediaNews Group)

Purvy also thwarted SF’s best scoring chance of the opening half, picking off Ryan Freed at the Souderton 10-yard line after Kolten Kqira’s kickoff return set up Spring-Ford at the Indians’ 32.

Souderton’s coaches are clearly excited about the present and future when it comes to Purvy, who does a little bit of everything for the 6-0 Indians.

“The more I’m on the field, the more I can do – whatever’s best for our team,” Purvy said.

“I think we’re capable of anything. If we can come in here and get a win, we can do it again next week.”

Harry Adieyefeh ground out 61 yards rushing for Spring-Ford, who took a while to gain any traction on offense.

“Our defensive coordinator, Mike Heath, put together a tremendous game plan,” said Gallagher. “Spring-Ford likes to spread you out and run between the tackles. We tried to pack the box and force them to throw the ball to beat us.”

And when the Rams figured it out, there just wasn’t enough time to complete the comeback. Ryan Freed finished with 95 yards passing and a touchdown but was intercepted twice by the Indians. Spring-Ford’s second straight PAC championship season came to an end at a mark of 6-1.

“We’re excited about this team and all the obstacles they’ve overcome,” said Brubaker. “Since July 1 all the way up until today, these guys have gone as hard as they possibly could despite not knowing whether we were going to play.

“This has been a great senior class to work with – we’ve had to do so many extra things just to take the field each week. Psychologically, it’s been constant, and a little exhausting for all of us. But all along, I keep saying I can’t wait until we get to 7 o’clock Friday night so this group can take the field again.”

Spring-Ford’s Nasir Cooke (21) and Zach Marinello (20) force a fumble from Souderton quarterback Evan Kutzler that was returned for a touchdown by Josh Hellauer in the second half. (Austin Hertzog – MediaNews Group)