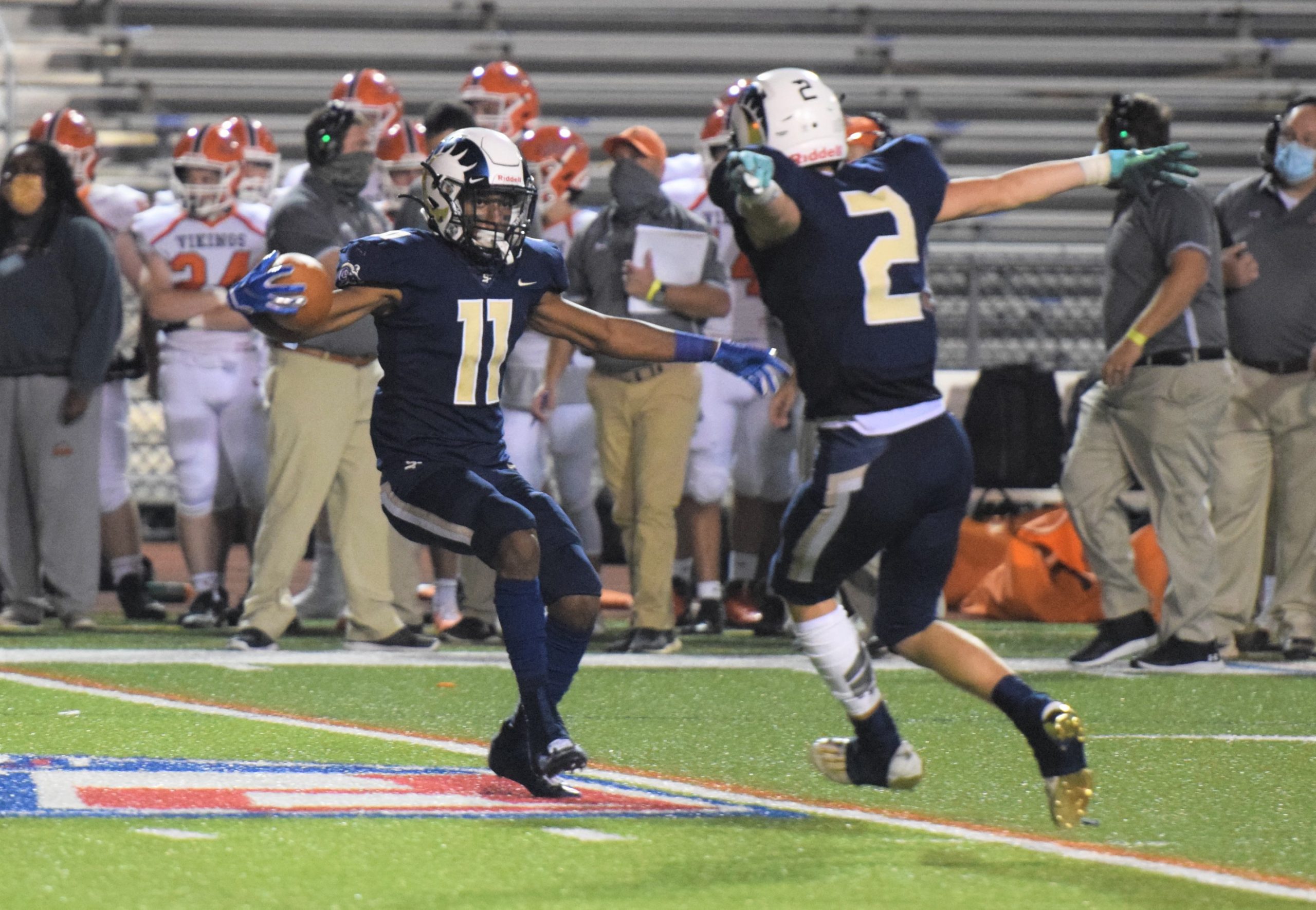 Austin Hertzog - MediaNews Group Spring-Ford’s Naphtali Stine (11) is congratulated by teammate Mason Brill after one of his area-leading four interceptions during Week 1 against Perkiomen Valley.

This year’s shortened schedule inadvertently created the simplest of playoff criteria for District 1 teams in Class 6A – make it through your schedule undefeated, and you’re in.

When No. 2 Spring-Ford hosts No. 3 Souderton on Friday night at Coach McNelly Stadium, the survivor will be one of only two teams to reach the second week of November unblemished. The other will be their opponent in next week’s District 1-6A title game, the winner of No. 1 Pennridge and No. 4 Coatesville.

In the Big Red, Spring-Ford figures to see a squad that doesn’t closely resemble any of their Pioneer Athletic Conference opponents in that they prefer a run-heavy, Wing-T approach to the offensive attack.

“(Souderton) is pretty big up front – we’re not as big, that’s a concern,” said Rams head coach Chad Brubaker. “But it’s tough to compare different opponents this year with the discrepancies in practice times, the lack of common opponents. I really think we need to throw all those comparisons out the window this year.”

Last week’s Spring-Ford opponent, Cumberland Valley of District 3, may bear the closest resemblance to the Big Red on the Rams’ schedule.

Cumberland Valley battled Spring-Ford, forcing the Rams into their toughest contest this season in a 20-14 victory. The win pushed Pioneer Athletic Conference champion Spring-Ford to 6-0, the lone District 1 team to achieve the mark due to the PAC starting a week earlier.

“A lot of the Suburban One League teams run I-form, downhill styles,” said Brubaker. “Cumberland Valley does a little bit of everything, and it’s why we scheduled them. They play in a strong league, they play strong teams, one of the best schedules out there.”

Souderton has run for 276 yards per contest in their five games behind their big offensive line, going over 10 yards per carry in their last two games (wins over Hatboro-Horsham and Bensalem). Junior Jalen White leads the Big Red with 101 yards per game and 10 rushing touchdowns, while Brayden Porter and quarterback Evan Kutzler round out Souderton’s main offensive weapons. Coach Ed Gallagher believes the speed of the Spring-Ford defense will be Souderton’s biggest challenge on Friday night, as they attempt to navigate a stingy defense allowing less than seven points per contest through the season’s first half-dozen games.

That Rams defense is led in the secondary by senior Naphtali Stine, whose area-leading four interceptions may dissuade Souderton even further from going to the air. The Big Red ground game will likely depend upon their size advantage in countering a Spring-Ford front seven enjoying a breakout season from junior linebacker Ryan Horvath.

“Ryan had a broken leg last year,” said Brubaker, “and even then, he was hobbling around at practice until he got it checked out. This year, he’s become a prototypical high school football player – multi-sport athlete, knows what he’s supposed to do, and is as good as anyone we’ve had at linebacker.”

Freshman Mike Bendowski, who ultimately projects to linebacker in the future, filled in admirably for Spring-Ford on the defensive line against Cumberland Valley and has likely earned himself further playing time this week.

Offensively, the Rams’ evolution into a collection of skill players who can be difficult to distinguish by skill sets continues with the expansion of Andrew Yoon’s role. The senior has had an injury-plagued high school career but looks determined to make the most of his final games in the blue and gold.

“When Andrew got back into the lineup in week 2,” recalled Brubaker, “we could see he wasn’t going to leave the field very often. He’s smart – he didn’t have to learn much when we switched him out to wide receiver. He also makes the plays that don’t show up on the stat sheet.”

Kolten Kqira had a big game against Cumberland Valley, and could feature in an increased role in the Rams’ offense Friday.

In what sets up to be a slugfest between two teams who take different path to similar outcomes, special teams could play a role, and Brubaker said punt returner Joe Brogan’s consistency could be a factor in Spring-Ford’s favor.

“It’s underappreciated, but he calls for fair catches and makes them,” the coach pointed out. “Last year, he made 15 fair catches. When you play on turf, that can be the difference between a 20-yard kick and a 30, 35-yard kick. It’s overlooked, but his decision-making puts our offense in better positions throughout the game.”

Methacton (3-3) at Council Rock South (2-2) >> Coach Dave Lotier and his squad look to seal the first winning season since 2014 for the Warriors when they travel to battle the Suburban One League’s Council Rock South for the final contest of 2020. The Warriors come in off a 17-6 victory over Pottsgrove that featured Methacton’s best performance of the year on the defensive line, recording two sacks and causing a fumble against Pottsgrove’s powerful running game.

This week, Lotier says his wide receiving corps of Justin Gumienny, Brian Dickey, Tom Chapman, and Matt Blakemore needs to step up on the outside to complement the inside running of Justin Carfrey. Dan Brandi’s breakout game last week suggests the Warriors may have more offensive weapons than they’ve shown to this point in 2020.

Daniel Boone (2-4) at Perkiomen Valley (4-2) >> The Blazers had a particularly difficult October schedule that won’t get much easier as they round out the season with a contest against Perkiomen Valley. Coach Rob Flowers, who complimented the resolve of his squad during the rough stretch, hopes to get AJ Hofer untracked for a big game running the ball this Friday against the Vikings, who will be looking to recover from a loss to Pope John Paul II. Linebackers Gage Young and Nico Holder will be key to stopping Boone’s running game, and Ethan Kohler looks to continue his conference-leading performance at quarterback (74-for-120, 1,075 yards, 12 TDs, 1 INT).

“Daniel Boone is an unfamiliar opponent for us,” said PV coach Rob Heist, “and we’re looking forward to an interesting game.”

Boone’s Alex Vassallo leads the Mercury area in receiving with 33 catches for 431 yards and five TDs.

Pottsgrove (2-1) at Boyertown (1-5) >> Don’t expect a lot of fancy passing plays in this contest between arguably the area’s two signature inside running, old-school teams. The power approach of Pottsgrove will clash with the Boyertown triple option to provide a contest that should be a treat for fans of fundamental, ball-control football. Ryder Gehris looks to back up a 32-6 victory over Pottstown in his first career start by repeating the performance against the Falcons, while the Bears hope to get Leo Egbe untracked in the running game.

Pottsgrove looks to rebound from its first loss behind the senior leadership of Manny Allen and Rylee Howard. Coach Bill Hawthorne called for offensive improvement against a Boyertown defense that undoubtedly gained confidence with last week’s performance. Zach Davis impressed on the defensive line for Boyertown in the win over Pottstown, his first game of the season due to a summer foot injury.

Upper Merion (0-3) at Phoenixville (1-1) >> The Vikings travel to Phoenixville, looking to salvage what must be a disappointing start to 2020 for a team that was ranked No. 9 in Pennsylvania’s Class 5A to begin 2020. The delay, cancellation, and later resumption of their season unquestionably took a toll, but Upper Merion maintains great potential in the running game with a physical offensive line led by Stefano Nikolaou and Keith Boyle.

For the Phantoms, their season-long resolve was rewarded with last week’s victory over Upper Perkiomen. Tre Davis ran for nearly 150 yards, while Owen Kock and Ahmid Spivey contributed on both sides of the ball.

Bishop Shanahan (2-0) at Pottstown (0-2) >> While both squads have only played two contests this year, they should provide an interesting test for one another when comparing results against Philadelphia Catholic League opponents. Pottstown hung tough for one half against 2A power Bishop McDevitt, while Shanahan outlasted Archbishop Carroll 14-7 in their own opener. This week, the Trojans will turn to senior Jahzeel Wayson and RB Malachi Neely as they attempt to limit turnovers and take a run at upsetting last year’s District 1 4A champions.

Cardinal O’Hara at Pope John Paul II (3-0); 12:30 p.m. Saturday >> It’ll be tough for the Golden Panthers to top last week’s defining 34-22 victory at Perkiomen Valley, but an explosive offense led by junior QB Rocco DiRico (239 yards passing, TD last week) should test the Lions’ defense in a number of ways. The dynamic passing game is complemented by Josh Little and Steele DePetrillo tough running between the tackles, while Little joins Chris Bruder in the stingy second level of PJP’s defense.

With no district playoffs in the cards this year, PJP still has motivation as they look to clinch the school’s first undefeated season this week and in next week’s finale at Pottsgrove.

Daily Local News’ football stats, week 4
DiGIOVANNI: Bishop Shanahan may not have playoffs, but this season is already a success