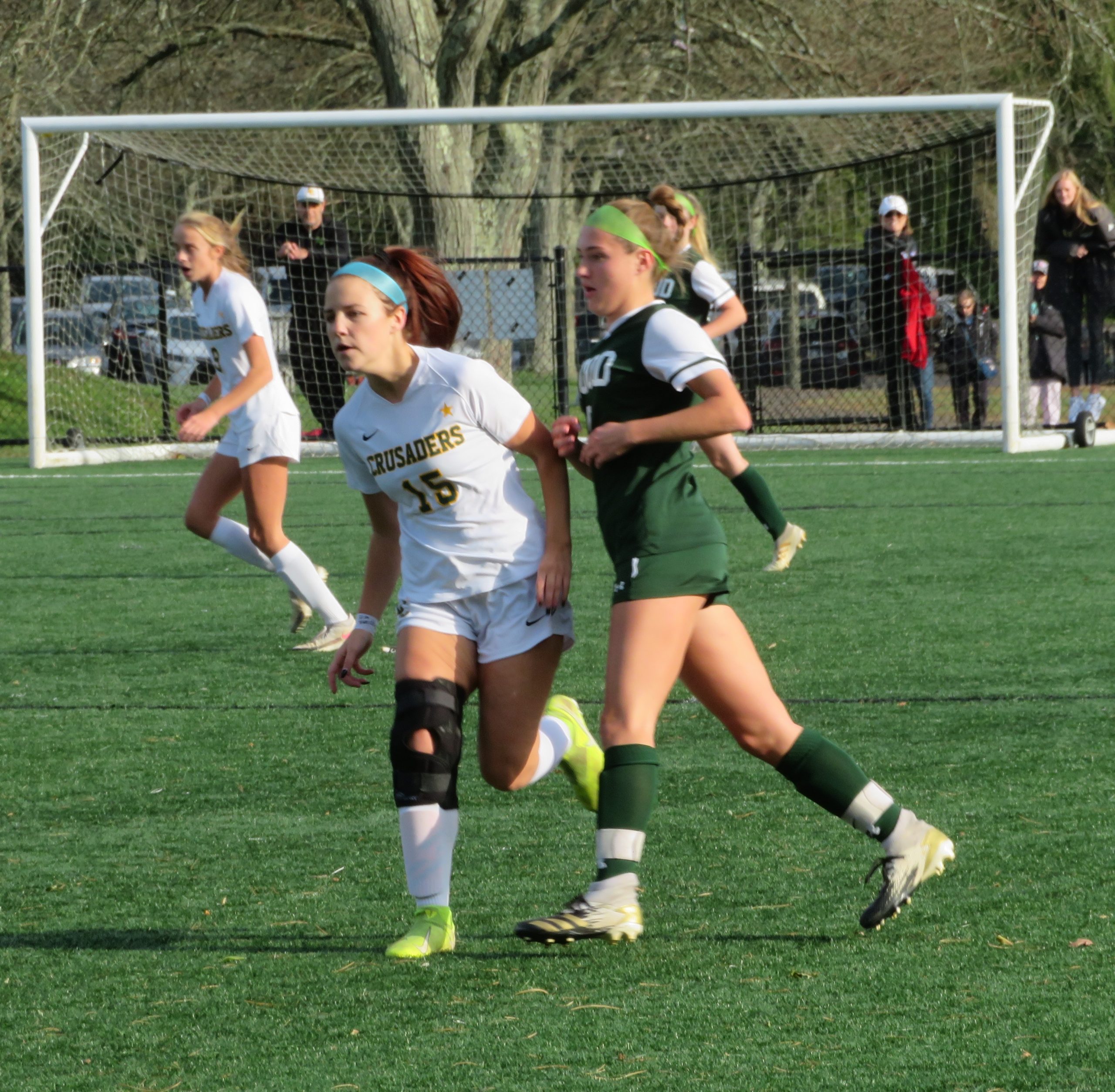 HORSHAM >> Every time Lansdale Catholic and Archbishop face off in a girls soccer match, there’s something on the line.

Aside from bragging rights, most years the Crusaders and Vikings are playing for standings in the PCL, advancement in the league tournament and even the right to represent District 12 in the postseason. Tuesday, the longtime rivals met again and with just one team from District 12 making the PIAA 2A tournament, there was plenty at stake.

A late goal in each half was enough to get Wood by with a 2-0 win over a spirited LC side at the Ukrainian Nationals Club.

“When you play four or five games a certain way and then it gets nitty-gritty, it becomes harder to play that way,” Wood coach Tom DeGeorge said. “We started to fall apart a little bit at the end, which it could have been the intensity of the game but we talk all the time about getting the result and 2-0 is a great result.”

Lansdale Catholic, the 2019 PIAA 2A champion, saw its hopes of defending that title dashed with Tuesday’s result but the Crusaders do have a couple more games scheduled.

Wood, a semifinalist in the PIAA 3A tournament last year, will face the District I champion in the opening round of the state tournament on Nov. 10.

Tuesday’s contest felt like two different matches, with each half taking on a very different style of play. Knowing they couldn’t win an up-and-down shootout with the Vikings, the Crusaders went defensive in the first half by bunkering down and looking to clear any chance of danger out of their end.

“All credit to (Wood), they found that one moment on a corner kick but I have to be honest, in the first half, we battled so hard defensively,” LC coach Bree Benedict said. “I think we had them frustrated that they couldn’t really create anything in the run of play. We’re really young, but to have that kind of performance was incredible.”

That opened the door for the Vikings, with their ability to work the ball around via passing or taking defenders one-v-one, to dictate the pace of the opening 40 minutes. But, LC’s defensive group was able to be rather disruptive, yielding only a handful of shots, avoiding fouls and getting the ball downfield or out of danger quickly at every opportunity.

With the Vikings’ backs not being tasked to much defending, they were encouraged to get into the attack. Center back Daryn Savage, who hits many of the team’s free kicks, was told to start serving the ball into the box and when Wood won a corner late in the half, she got sent into the mix.

The move paid off for the Vikings. Leighann Kafel’s corner came down to Grace Hoeger at the front of the crowd and Hoeger’s touch teed up a half-volley for Savage who one-timed a right footed shot over the keeper for the eventual game-winner.

“We just found a way to score,” Savage said. “I was waiting, I thought someone else was going to get a foot on it so I hesitated, but it was there for me and I got a good foot on it. I hit it and hoped it went in.”

Needing to now chase the game, LC opened things up in the second half. The Crusaders, who featured mostly freshmen and sophomores, broke out of their shell and took the game at Wood. While the scenario seemed to favor the Vikings, the Crusaders put on just as much, if not more, pressure.

LC pretty much emptied the tank trying to get a tying goal, even playing as many as four forwards in the final stretch. While the Crusaders fell short of their goal to get back to states, senior captain Nicole Steinbach felt her team turned a corner with its performance.

“With COVID and the start of our season being so delayed, it was weird just throwing a bunch of girls on the field and not having any connection with each other,” Steinbach said. “Today really showed our love for each other and our love for the game. We played with a lot of heart and a lot of love for each other. I think we gave our best effort and did the best we have all season.”

Wood was able to ice the game with another late goal, this coming from senior Paige Hoeger. A goal kick from the Vikings bounced past an LC player, allowing Hoeger to pick it up just past midfield and starting running at goal. The VCU recruit slipped in behind the recovering LC defense and pocketed the insurance tally with about three minutes to go.

Tuesday’s game was just the sixth this fall for the Vikings and while they haven’t lost yet, they also know they’re far from a finished product. Unlike last fall, where another team opting not to play gave Wood a chance at states, the Vikings know where they’ll be in the bracket next week and want to keep improving before then.

“That should get our wheels turning and give us a lot more motivation to keep going and pushing,” Savage said. “It’s all communication, we talk a lot on the field and at practice, we continue to work on playing off each other.”

LC has three games left on its schedule starting with a Thursday trip to Cardinal O’Hara. The Crusaders will then host a Friday game with Upper Merion and finish with a Saturday home match against Hallahan.

Tuesday, Benedict told her senior class they shouldn’t let the result define them. As a class, they were part of the program’s first PCL title in 2018 and first state in 2019 and have set a bar for their underclassmen teammates to play up to in upcoming seasons.

Steinbach said she wants to see the same kind of intensity and urgency the Crusaders showed Tuesday in their final three games and she, along with fellow seniors Shea O’Donnell, Emily Hopkins and Delaney Moletierre hope they left the right example of what it means to play for LC.

“Winning isn’t everything and being a good leader on the team will show how far you can go,” Steinbach said. “The leaders on our team, I think we showed the freshmen and sophomores what the expectations are for the team and I hope they show that to the classes coming in behind them.”