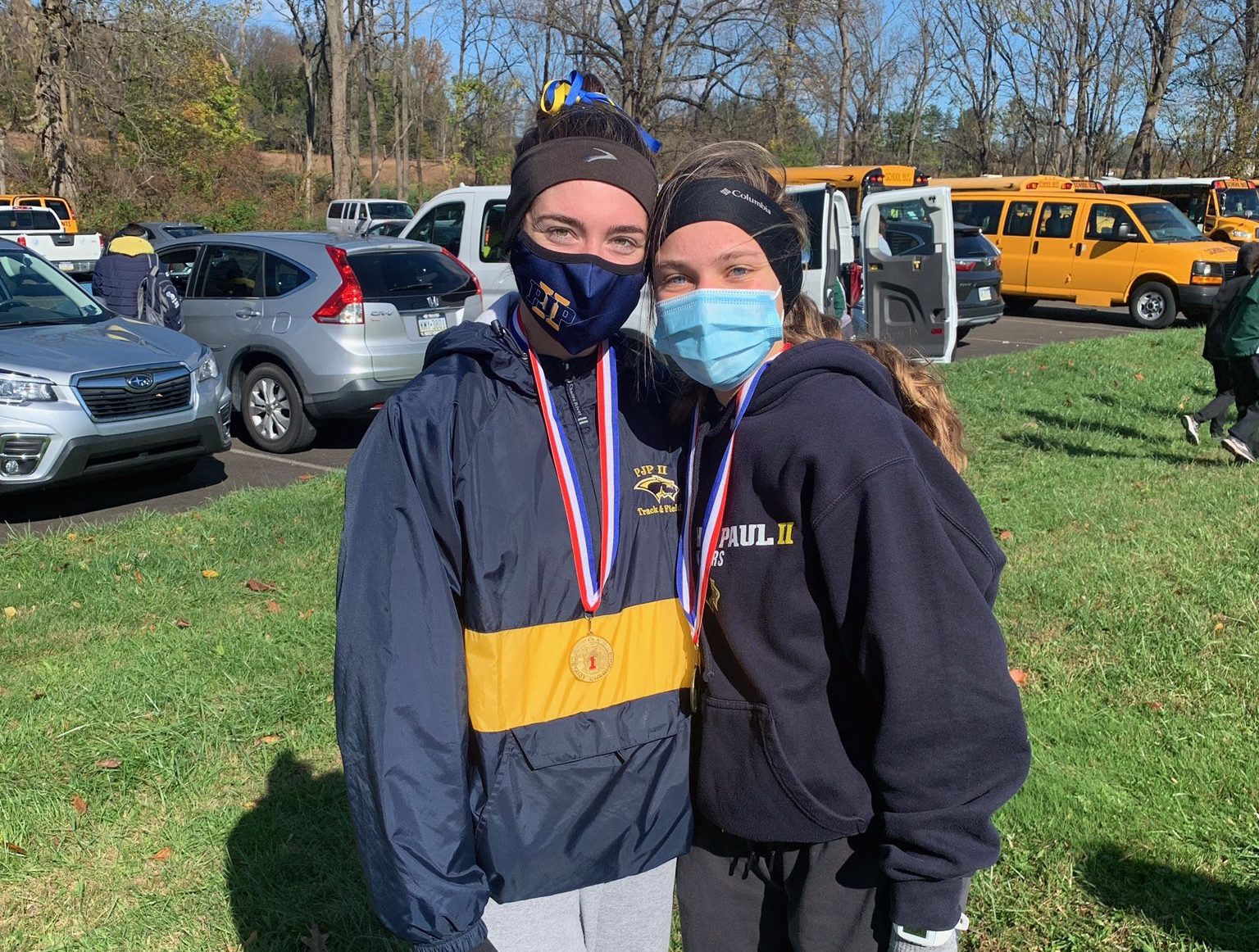 NEWTOWN >> Her 2020 season was shorter than others she’s had.

So Gianna Cagliola is making up for brevity with quality.

Cagliola described the course, a change from the district’s usual venue of Lehigh University’s Goodman Complex, as “challenging.”

“The wind was a factor,” she said. “The second mile, it was in my face. I tried throwing my head to the side, but there’s not much you can do about it.” Cagliola’s win was complemented by a third-place finish from teammate Kathryn Todd, a close third to Campisciano at 21:10.9. Todd, also a junior at PJP, was in seventh place up to the first mile, moving up to third around the 1-1/2 mile mark.

“I usually run the first half slower,” she said. “The girl in second (Campisciano) was in second with me for about 800 yards, then she pulled ahead.”

In contrast to Cagliola, Todd had a different assessment of the Tyler Park course.

“It was rough. There was a lot of mud today,” she noted. “I kept slipping … it was like running in sand.”

Pope John Paul, like other high schools in the Archdiocese of Philadelphia, went into the fall season with sports programs not competing in events. That policy was rescinded in early October, leaving the Golden Panthers starting too late to be part of the Pioneer Athletic Conference’s league schedule.

“Even with a season that was inconsistent,” Cagliola said, “we tried to keep consistent. Our team was close, which is good for the situation we’re in now.”

On the boys’ side, Darius Smallwood had a similar experience in an abbreviated 2020 season. The Pottstown senior had just two chances to run dual meets prior to districts, but he was part of an exciting finish in the boys AA event with Holy Ghost Prep’s Elliott Puckett. “I stayed behind him until 200 meters left,” Smallwood recalled. “This is the way it (race) ended last year.”

Owen J. Roberts sophomore Claire Zubey highlighted the PAC girls 3A field, the 2019 Mercury All-Area Girls Cross Country Runner of the Year clocking a 19:19.7 for second place. West Chester Henderson’s Jenna Mulhern in an 18:18.2 to run away with the title.

“She’s really good,” Zubey said of Mulhern, whose teammate Liesl Scherrer helped bookend Zubey in the finishing order. “She took it out at the beginning. I was trying to see her the whole time.”

Weronica Ziemniak was the Warriors’ other top 10 runner, placing ninth in 19:49.4. Ashley Gordon, Pennridge senior and winner of the AAA girls’ second race, was fourth overall in 19:37.2.

“My coach told me I could make states. That was my goal today,” Gordon said. “Today was all about racing … getting to the state meet.”

Downingtown West was the boys AAA team champion with 57 points, beating out neighboring rival Downingtown East (72). Aidan Barnhill claimed the win for the Whippets in a time of 16:21.4, edging out Hatboro-Horsham’s Devon Comber (16:24.4) and Unionville’s Ethan McIntyre (16:35.2). Declan Rymer (fifth) and Holden Betz (16:50.2) were other West runners finishing in the top 10, Rymer fifth and Betz ninth.

West Chester Henderson was third behind the Downingtowns, getting Top 10 outings from Gavin Brophy (sixth, 16:48.9) and Jack Davidson (ninth, 16:54.9).

Eric Muthersbaugh was the Pioneer Athletic Conference’s highest finish in the AAA field. The Boyertown senior finished 15th in 17:11. Muthersbaugh finished one spot in front of Perkiomen Valley’s Kabiru Brown, who clocked a 17:14.4.

PAC champion Spring-Ford got a 21st-place showing from Quintin Smith (17:31) as it was 10th in the AAA team standings. Owen J. Roberts was the league’s top boys team, finishing seventh with Andrew McGonigle placing 23rd in 17:34.6; and Methacton was ninth with Vaughn Lackman placing third 17:50.8.

“I felt good for the first mile,” McGonigle recalled, “but on the back, a strong wind picked up. I felt I had to stay strong.”

Jenkintown completely dominated the boys A competition, its runners sweeping the top five spots for 15 points.

Calvary Christian Ac. was second in the team standings with 71 points. It was headed by Phillip Rogers’ eighth-place effort.

Though Emily Greenup won the girls A race for New Hope-Solebury, Dock Mennonite Ac. was the bracket’s team champion with 42 points.

Sydney Putera placed second for Dock (22:19.2), which got a sixth from Celeste Derstine and a ninth from Isa Rodriguez. NHS, the second-place team with 61 points, saw Nina Meiler finish third and Shannon Herbert seventh.

NOTES >> The top 25 runners in each bracket were awarded medals. … State qualification went to the various team champions and top 13 individuals.