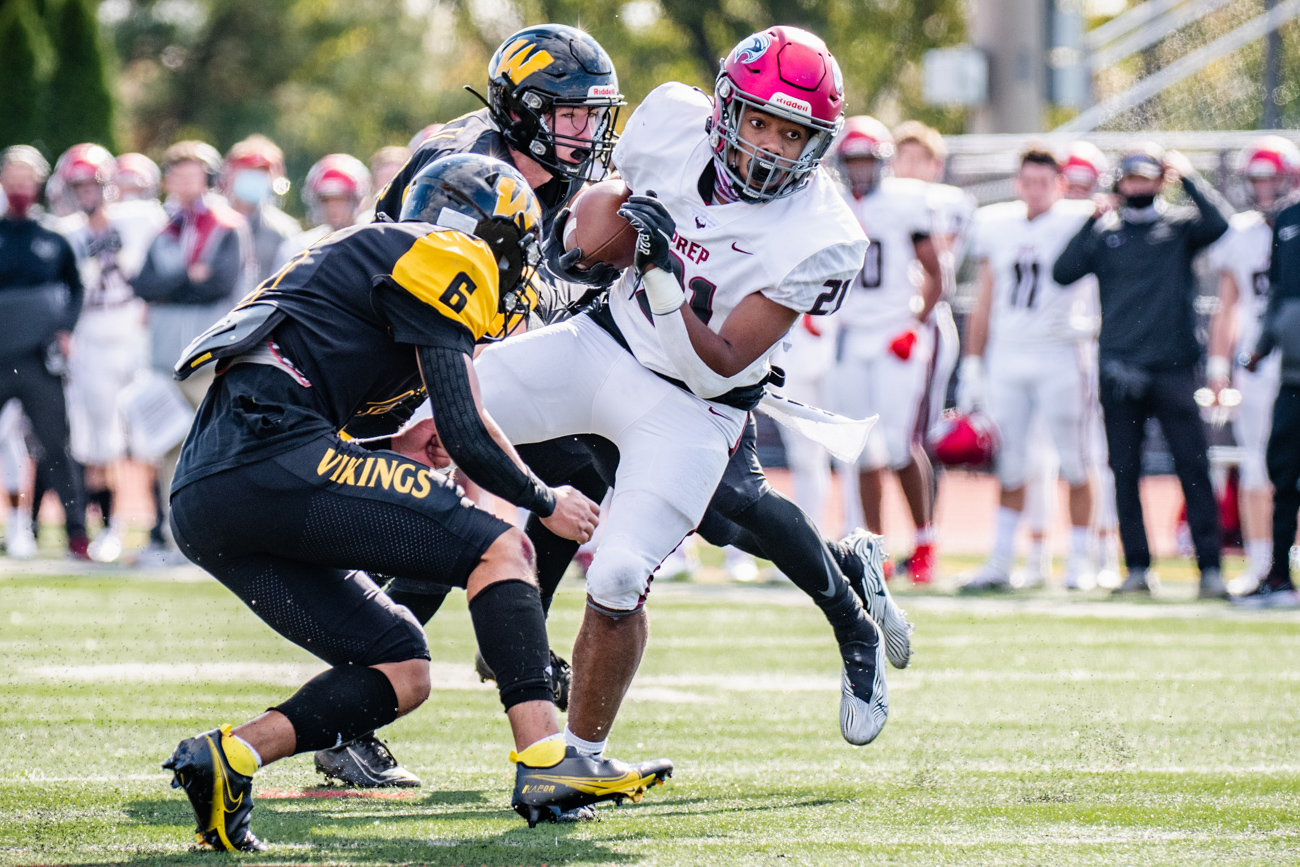 WARMINSTER >> Archbishop Wood’s first offensive play on Saturday was a 16-yard run around the left side by Kaelin Costello.

The Vikings’ last play – as time expired – was a two-yard touchdown run by Ricardo Delgado.

These two moments were sandwiched around an otherwise tough afternoon for Wood, which fell 52-6 to nationally-ranked St. Joe’s Prep.

“You know what you’re gonna get. You gotta come out with a perfect game. You gotta have yourself prepared, do it 100 percent, and it’s gotta be almost perfect.” St. Joseph’s Prep quarterback Kyle McCord (6) readies a pass to the corner of the end zone for another touchdown to Marvin Harrison Jr. (8) against Archbishop Wood on Saturday, Oct. 31, 2020. (James Beaver/For MediaNews Group)

The Hawks scored on the seventh play from scrimmage and were in control from there, raising their record to 3-0. Class 6A State Champions in five of the last seven years, the Hawks built a 38-0 lead by halftime to ensure a running clock in the second half.

It was a tremendous day for Ohio State recruit Kyle McCord, who completed 12 of 23 passes for 235 yards and four touchdowns and a rushing touchdown as well.

The defending 5A Champs stuck with it, getting a nice day on the ground from Delgado, who kept chugging for 64 rushing yards and a TD.

“We’re always gonna be tough, be gritty and fight to the end,” Walp said. “We’re gonna do everything that we possibly can.” The Hawks built a firm lead with a 55-yard scoring pass from McCord to Malik Cooper and a 32-yard field goal by Antonio Moeller, making it 17-0 in this Philadelphia Catholic League Red Division contest.

Two more touchdown passes from McCord – 14 yards to Marvin Harrison Jr. (son of the NFL Hall of Famer) and 8 yards to Cooper – added to a 27-yard interception return for a touchdown by Jeremiah Trotter Jr., son of the former Eagle.

Wood drove to the Hawks’ seven late in the first half but turned it over on downs.

Wood (2-1) quarterback Max Keller was lost to a possible concussion midway through and was replaced by Julian Talley. Talley was able to hit a couple things for the Vikes, setting up Delgado’s scoring plunge at the end. St. Joseph Prep’s Marvin Harrison Jr. (8) is unable to pull in a pass from Kyle McCord (6) in the end zone against Archbishop Wood on Saturday, Oct. 31, 2020. (James Beaver/For MediaNews Group)

The Hawks’ two second-half TD’s came on a 10-yard pass to Sahmir Hagans and a five-yard run by Blaine Bunch.
Wood has a big one next Saturday, at La Salle at 1 p.m.

“We’re gonna get back to work,” Walp said. “We’ll be back at it and continue to get better. Where we’re at, there’s no question in my mind we’ll rally and pull together.”