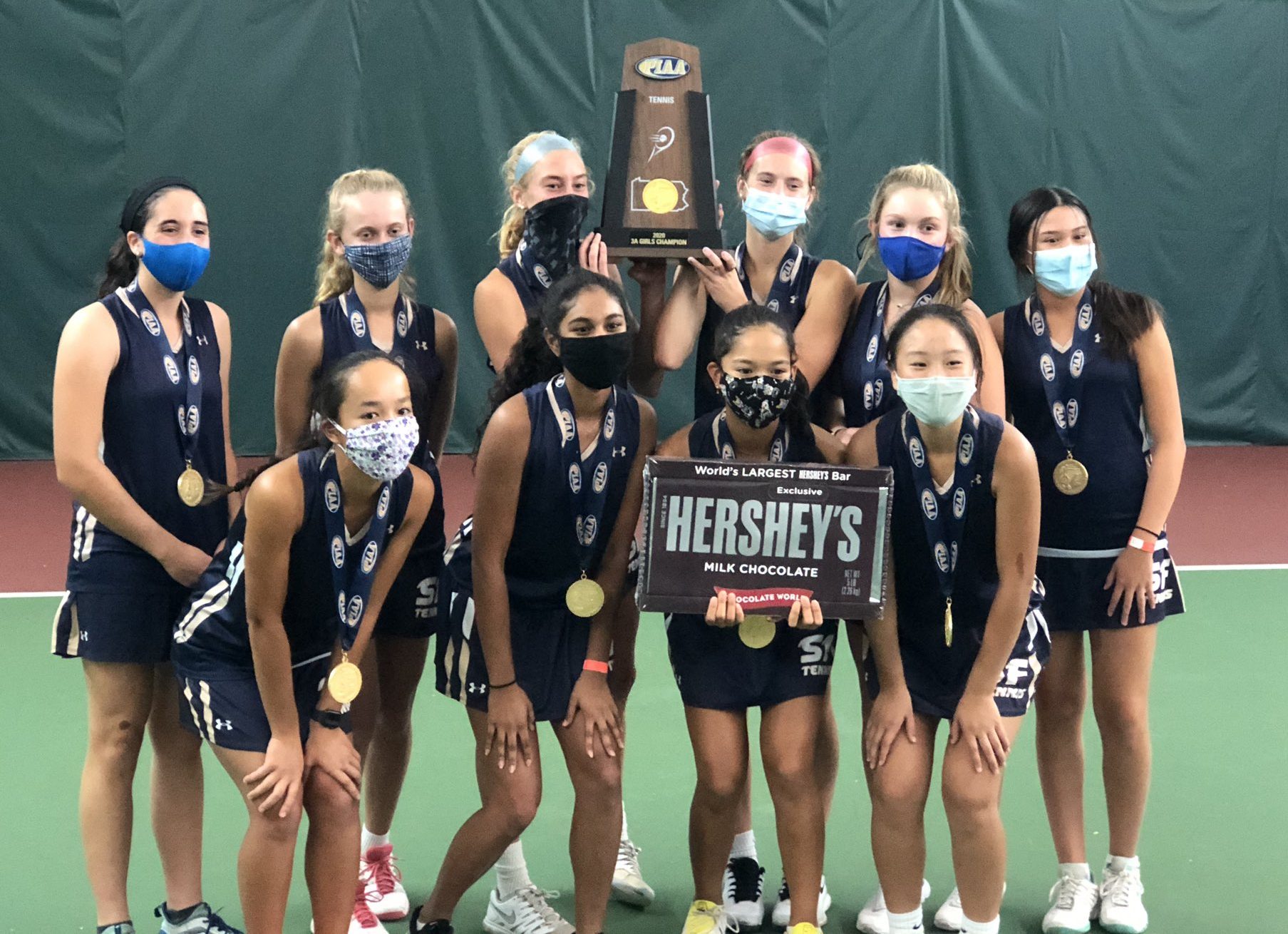 The goals for the Spring-Ford girls tennis program have remained the same for the last decade: win a Pioneer Athletic Conference championship and accomplish more than any previous team.

Before they arrived at the Hershey Racquet Club on Saturday for their PIAA Class 3A semifinal match against Southern Lehigh, the Rams had already checked both boxes for the 2020 season and more.

By the time they were boarding the bus home, the 2020 Spring-Ford girls tennis squad had made the last of those goals impossible for the teams that follow them.

After taking out District 11 champ Southern Lehigh 4-0 in their semifinal round, Spring-Ford defeated District 7 champ Greater Latrobe 3-2 in Saturday’s PIAA Class 3A championship for the Rams’ first state crown.

“It’s crazy. I never thought we would win one,” Spring-Ford senior Lucy Olsen said. “I’ve always wanted to win one. I’ve tried every year, and this year everyone just came up clutch. I’m so excited.”

“Everyone played a really important role in this state championship … and everyone just stepped up their game today,” she added.

Spring-Ford rolled in the semifinal round Saturday, not giving up a point in two of its matches.

The championship match came a little tougher as Greater Latrobe picked up wins at Nos. 2 and 3 singles, but Spring-Ford’s standout freshman and doubles depth won the day.

Matriccino defeated Jenna Bell 6-1, 6-0 in first singles, remarkably reversing a result from the summer when Bell edged Matriccino in a third-set supertiebreaker during an August juniors tournament outside of Pittsburgh.

Olsen and Tiffan knocked off Reese Petrosky and Maya Jain 6-2, 6-1 in first doubles soon after and Luo and Mejia quickly wrapped up a 6-1, 6-2 victory over Avery Massaro and Emily Pierce in second doubles to deliver the Rams a state title.

“We played really well together, and we hit a lot of great shots,” Tiffan said of her and Olsen’s two victories. “We just got really pumped before and kept the same energy throughout the whole time.”

Spring-Ford’s girls tennis program hadn’t advanced past the first round of the District 1 tournament prior to this season.

Along with claiming their second straight Pioneer Athletic Conference title, the Rams had already won the program’s first District 1 playoff match, District 1 championship and state playoff match before taking the courts Saturday and adding first state title to the list of accomplishments.

Matriccino said the team’s 3-2 victory over top-seeded Unionville, the 2019 District 1-3A team champion, in the district semifinals gave Spring-Ford a sense of what it could accomplish early in its postseason run.

The Rams followed with a 4-1 win over Wissahickon in the District 1 championship and 5-0 sweep of Cardinal O’Hara in the PIAA first round before their semifinal and championship victories Saturday.

“I feel like in districts when we beat Unionville, which was the No. 1 seed, we felt like we were on fire in a way,” Matriccino said. “We felt like we could do anything at that point.”

“We just had the drive and confidence,” she added. “No one expected us to get this far. We were the No. 4 seed in districts. We had never won a district round before this at all. We wanted to show everyone that we can win.”

While the young Rams have played high-level matches and tournaments in their individual careers, competing on a big stage as a girls tennis team at the high school level was something no one on this Rams’ team had ever done before.

Any type of inexperience they had never shown.

“Our kids, they never really have looked nervous,” Spring-Ford coach Todd Reagan said. “Our coaching staff, we knew at the beginning of the year that we had a special team with a lot of kids with a lot of talent, and we’ve been telling them the same thing every match. It’s never changed. … We told them, go out there confident, be calm when things go wrong … and then be aggressive and play to win.

“They’ve never questioned it. They’ve never doubted it. They just do it every single time and they do it so well because they’re so good. They really have worked really, really hard to get where they are in their games right now.”

Olsen and Tiffan noted the talent, experience and confidence of the underclassmen rubbed off on them and others throughout the year.

Matriccino delivered a pep talk to the team before they took the courts against Greater Latrobe for the championship on Saturday.

“Honestly they prepared us for it,” Olsen said. “They have all the experience of tennis and they helped us get better throughout the season. Mia’s pep talk was top notch. I think that basically won it for us.”

The depth of the Rams’ lineup stood out as something that differentiated this group from past Spring-Ford teams. Krause and Isabel Mejia, the 2019 PAC champion and runner-up, played in second and third singles this season. Both picked up key postseason wins in those spots, including a three-setter for Krause in the district victory over Unionville.

Behind Olsen and Tiffan, the second doubles pair of Luo and Evelyn Mejia didn’t lose a match in districts or states.

“You gotta start down at our second doubles Alexis Luo and Evelyn Mejia,” Reagan said. “They haven’t lost this year. All they do is win. They don’t know anything other. They play tough, they play smart … and they’ve just been our rock.”

Winning a state title is an exciting accomplishment in its own right and bringing home a program’s first state championship brings even more celebration.

“It’s been really special for me,” Tiffan said. “Obviously when we’re in school we saw all different people, but we’ve just been with the tennis team pretty much. We got pretty close.”

“I think since we don’t have school, we’ve gotten a lot closer with the tennis team and it just made this whole thing way more fun that we’re such great friends,” Olsen added.