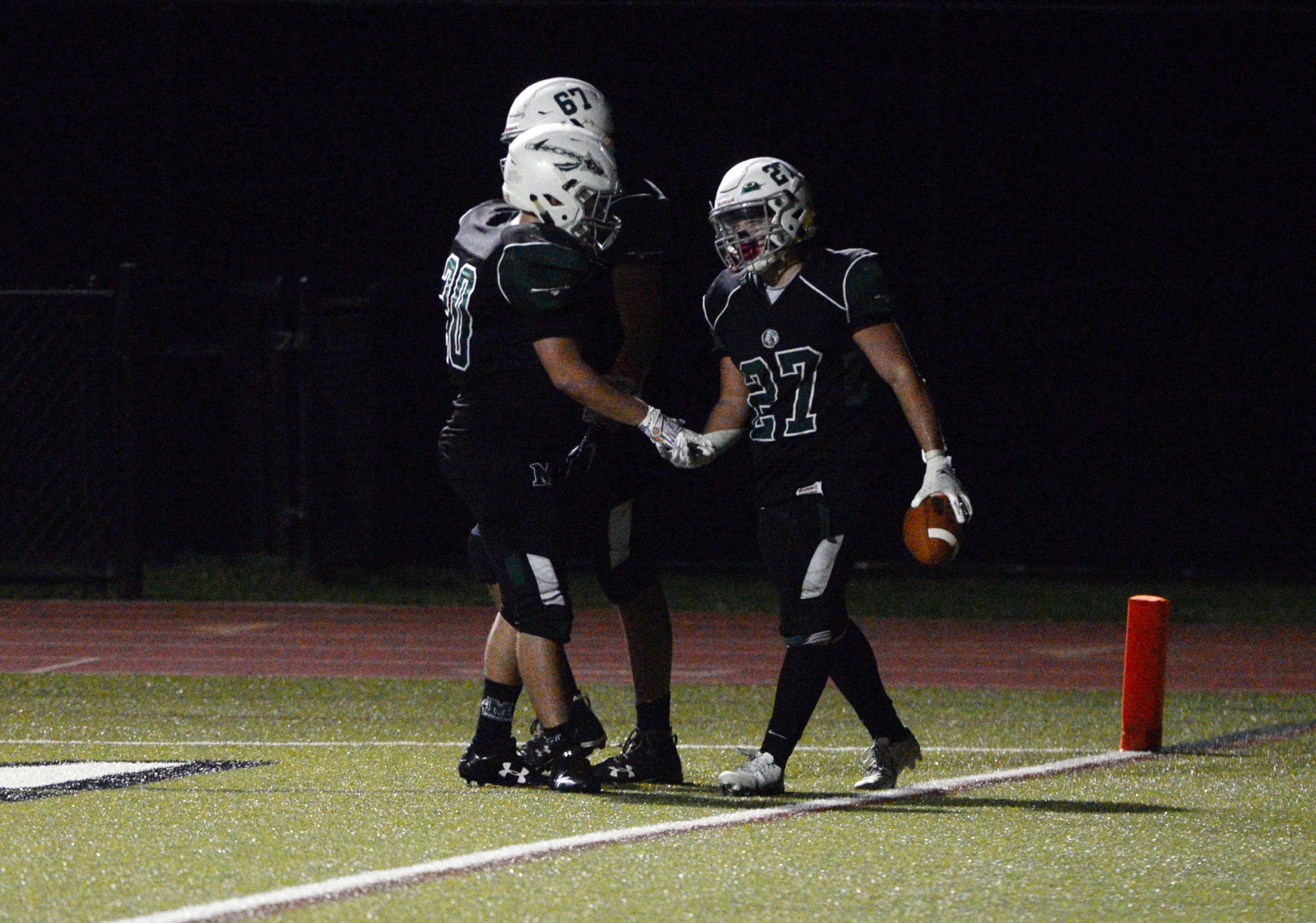 Methacton’s class of soon-to-be-graduating gridders oversaw an even more memorable performance Friday. The Class of 2021 Warriors were honored prior to their game with Pottsgrove, then led their underclassmen teammates to victory over the Falcons and the possibility of a memorable finish to the current season.

A 17-6 victory over Pottsgrove enabled Methacton to dent the 10-1 lead the Falcons hold in the schools’ series. It also keeps alive hopes by the Warriors (3-3) to finish with a winning record pending the outcome of next week’s game with Council Rock South.

“It was a great night,” Methacton head coach Dave Lotier said. “I told the seniors I couldn’t be happier.

“My second game, we played Pottsgrove and they handed it to us (34-0 in 2018). The seniors were in their first year on the team. They put in the work since then.” The Falcons (2-1) came into Friday’s game looking to continue their winning start to the abbreviated 2020 season. But they yielded 17 unanswered points from the midpoint of the first quarter before averting a shutout by scoring inside the three-minute mark.

“Give Methacton all the credit,” Pottsgrove head coach Bill Hawthorne said. “They beat us in all three phases of the game. They were the better team tonight.”

While 17 Warriors shared the pre-game spotlight, the hometown fans got a look at the program’s future. And Dan Brandi gave them plenty to savor.

The junior backup to senior quarterback Mike Merola figured on both Methacton’s first-half scores. He collaborated with Merola (5-for-11, 59 yards) on a 24-yard scoring pass at 6:19 of the first quarter, then ran 80 yards through his right tackle at 7:44 in the second.

“He has athleticism,” Merola said of his fellow signal-caller. “He gave the defense a different look. Get him open, and he makes plays.”

“Brandi got some time last year to show what he can do,” Lotier added. “I told my coaches we have to get him into the game, he’s one of our better athletes. He’s in the swing of things … a real weapon for us.”

Brandi’s big run, the game’s longest play from scrimmage, was complemented by another workhorse effort from Justin Carfrey. Half of a twin-brother tandem with Joe Carfrey, Justin carried the ball 19 times for 91 yards. His running helped Methacton get in position for Tyler Ready’s 30-yard field goal with 6:04 left, as well as picking up a first down that enabled the Warriors to keep control of the ball for the final 2:41.

“Justin does what we want him to do,” Lotier noted. “He’s a complete back.”

Pottsgrove started the game with Shane Caffrey, a junior and backup to starter Ryan Sisko at quarterback, but Sisko (2-for-3, 31 yards) got called on in the fourth, and he responded with a five-yard TD toss to Justin Wescoat at 2:41 in the fourth, capping an eight-play final possession highlighted by Rylee Howard (13 carries, 58 yards) getting the initial first down with a 14-yard run.

The score proved too little, too late. The Falcons were hampered by numerous high snaps during the game, contributing to six plays going for minus yardage.

“We had negative plays on both sides,” Hawthorne said. “Bad snaps and penalties were a huge part of it. That falls on me.”

“We put pressure on them,” Quinn Shields, a senior lineman for Methacton, added, “and our backs found the holes.”

Finishing the year with a winning record will be big for a Methacton program that’s been through rough seasons even predating Lotier taking over the program. The Warriors haven’t surpassed the .500 mark since 2014.

“It goes back to a statement about how we’re doing,” Lotier said. “There have been games we’ve won, but now we’re competing against teams. … Obviously we’re looking to go over .500. We want to make that the new thing.”

NOTES >> Dan Meier, another of Methacton’s seniors, recovered a fumble that halted a Falcon drive to the Warriors’ 25 late in the first quarter. … Pottsgrove saw one early scoring attempt miss when Luke Kaiser’s 39-yard field goal attempt bounced off the right upright at 7:59 of the second quarter. That preceded Brandi’s 80-yard TD jaunt on Methacton’s next play. … Carfrey twin Joe was lauded by Lotier for his play on the defensive side. “It’s great to see brothers like that,” he said. … The punting game was a particularly notable aspect of Pottsgrove’s performance. Kaiser averaged 41.3 yards per kick, a total that could have been higher save for one punt that went only nine yards following recovery of a bad snap. … Methacton High School, in part of an annual tradition, presented two prestigious alumni awards at halftime. Its Legacy Award went to Guy Brunt (Class of 1969), and 2002 graduate Amanda (Heyser) Knight was added to its athletic honor roll.