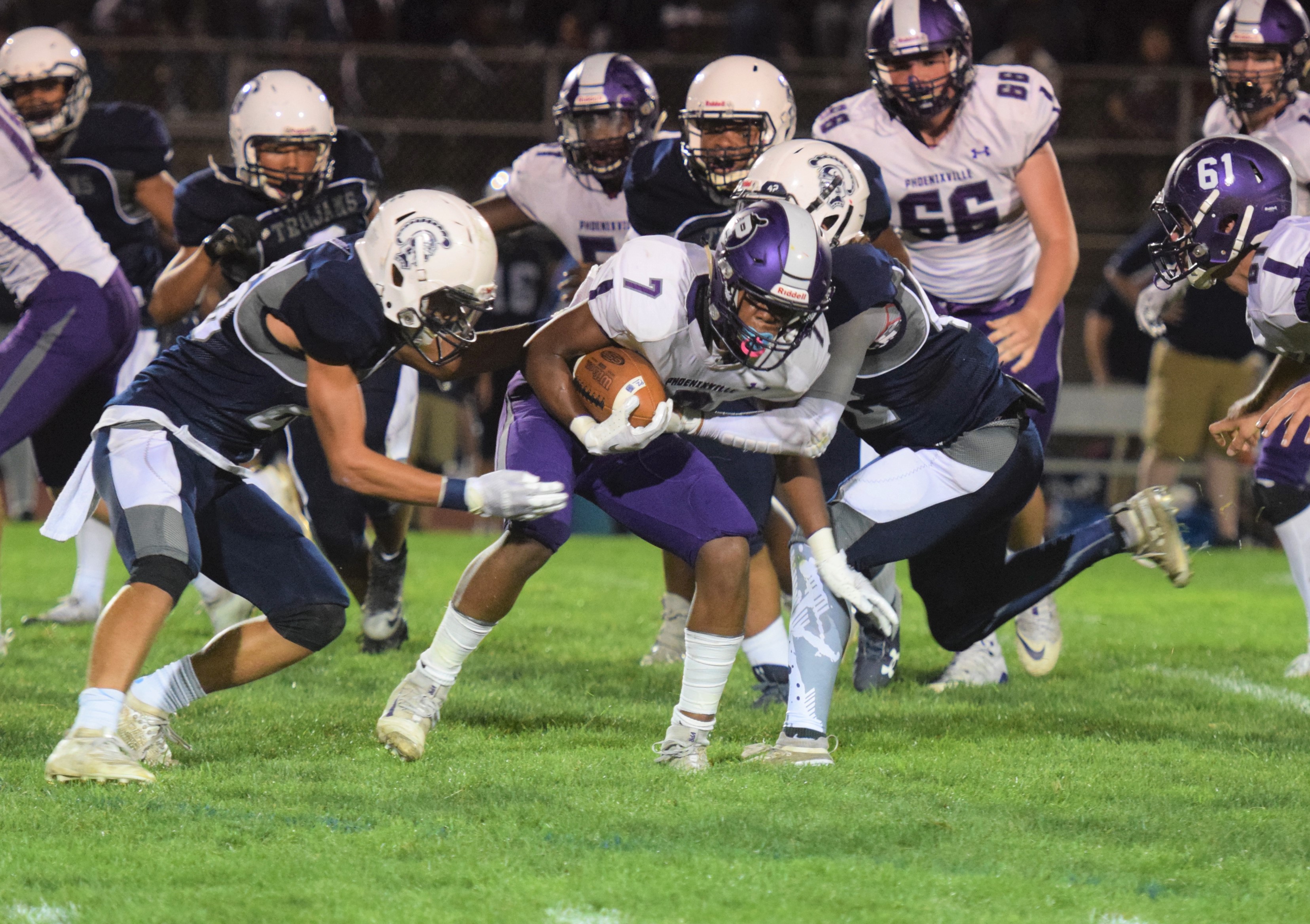 RED HILL >> Phoenixville quarterback Tre Davis rushed for 149 yards, a touchdown and completed a pass out of his own end zone late in the fourth quarter on a raw, windy night beneath a blue moon to lead the Phantoms to a 20-12 win over host Upper Perkiomen.

At the end of a closely contested first half marked by quick-strike, big plays, the Phantoms led 14-12 with 7:53 left in the first half. Despite threats to that lead, Upper Perk could get no closer the remaining 28 minutes.

“We got burnt, but adjusted and fixed the problems,” said Ciarlello, who could be heard exhorting his seniors to win the fourth quarter. “Guys like Dylan New, (Kris) Grinstead, Aidan Foley and Jack Kelly (all seniors) really answered that call.”

Upper Perk was led by seniors Hunter Flack and Malachi Duka on offense and seniors Ethan Wambold and Riley Decker on defense along with junior Damon Faraco, who led the team in tackles.

“It’s so sad to have it end,” Flack, a three-year starter and twice captain said. “We wanted to end it with a win. (It was) all so close. It was right there.”

Owen Koch’s seven-yard run opened the scoring 8:40 into the game. Upper Perk responded eight minutes later when Logan Simmon went off left tackle for a three-yard touchdown. Simmon, Upper Perk’s top rusher and one of the area’s leading rushers this season, would leave the game mid third quarter for concussion protocol, and not return.

On the second play of the ensuing drive, Davis went 52 yards on a quarterback draw for a touchdown. Seven seconds following a 38-yard Simmon kick return, Flack hit Corey Jackson with a 34-yard touchdown pass to make it a 14-12 game.

In the third quarter, Davis lateralled to freshman Ty Romance who completed a forward pass to senior Max Strunk down to the Upper Perk six. A play later, Ahmid Spivey dove in for a two-yard score, but Jackson’s block of the extra point try kept it a one-score game.

Ciarlello believed the game turned on a special teams play when Kelly nailed a 48-yard punt to flip the field and put Upper Perk back at its 22 with just five minutes left.

“Kelly’s punts, especially that last one, were a big key,” said Ciarlello. “He secured field position for our defense. He’s a soccer stud, goalie for our soccer team, who just volunteered to try to punting at the start of the season. He’s also done a heck of a job kicking the last two years.”

Kelly said he enjoys both sports and gave punting a try this year to give Davis a break.

“You want to give a quarterback as valuable as Tre a break as much as possible,” Kelly said. “I practice (football) after soccer twice a week. I love the atmosphere with this team.”

That sentiment was echoed by Upper Perk captains Wambold, who called playing with his teammates throughout the years “a true blessing,” and Duka, who said playing high school football “with these coaches and teammates…the best four years of [his] life.”

Flack, who plans to continue his state-caliber pole vaulting at Liberty University, lamented that pandemic and the decisions that changed Upper Perk from its Frontier Division schedule.

“I just wish we could have had a full season,” Flack said. “We really were a family and wanted to play the other league teams.”

UP coach Tom Hontz praised how his team fought and the leadership of his seniors.

”We were hoping to give these guys more of a season,” Hontz said. “They did so much, broke down cliques and changed the culture. It’s just a shame somehow we couldn’t seem to somehow reschedule those other (Frontier Division) teams.”