Carl puts Upper Dublin in position to shut down Hatboro-Horsham 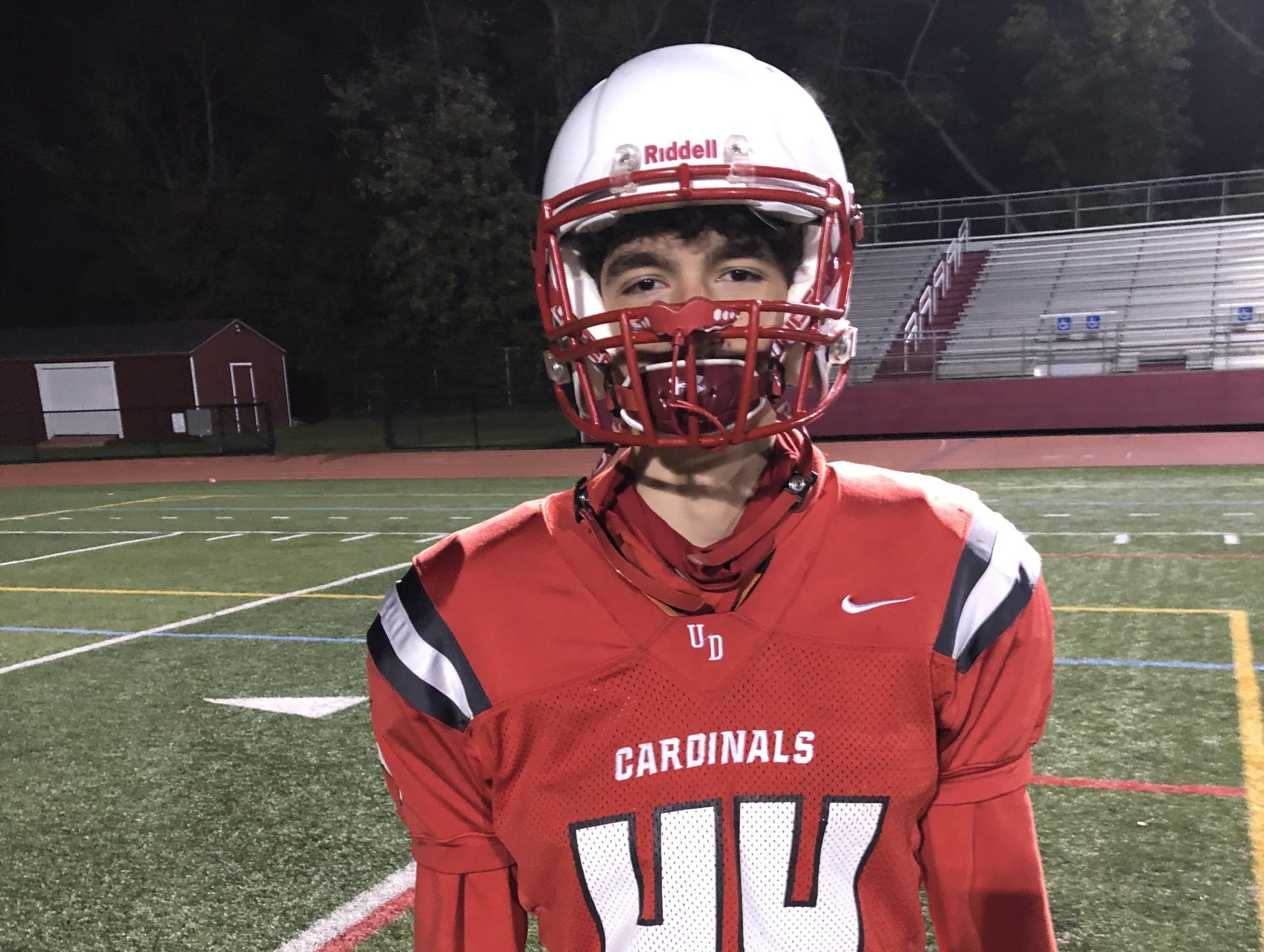 UPPER DUBLIN >> Owen Carl is the weapon that barely shows up in an Upper Dublin box score.

The Flying Cardinals junior punter/kicker has a good leg, is as reliable as they come on extra points and booted an important field goal early in the season. Friday, in UD’s regular season finale against Hatboro-Horsham, Carl’s punting was a huge factor in a high-scoring night for the Cardinals’ defense.

Thriving on the field position Carl gave them, the UD defense pitched a shutout in a 32-0 win over the visiting Hatters.

“I thought our punter might have had the game of the year,” UD coach Bret Stover said. “He pinned them deep, we got the two safeties and a scoop-and-score so you get 10 points from your defense, that’s huge and it takes the pressure off.”

Upper Dublin (4-1) isn’t big on singling out performers, but Carl did get a much-deserved shout-out from the coaches in the postgame huddle.

Carl punted five times for a 38.6 yard average but again, that hardly tells the story. Four of his punts were downed inside the Hatters’ (0-4) 11-yard line and three of them led to scoring plays for the Upper Dublin defense or special teams.

While the junior makes his bread with his foot, he needed both feet to pull off the play of the night. Late in the third quarter facing a 4th-and-10 at midfield, Carl didn’t boot the ball and instead took off running with it. After a few shaken tackles and 29 yards later, he was finally run out of bounds but had picked up a first down and had his teammates going wild.

“I wasn’t thinking at all. I caught it, started running, saw a dude in front of me and knew ‘I have to go,’” Carl said. “When we’re doing punt return in practice, that’s our varsity team so when I take off, that’s who is in front of us. It’s something that I’ve practiced, I guess.”

Carl’s first punt of the night pinned Hatboro-Horsham at its own 11 and three plays later, a botched gadget play allowed UD senior Jacob Rossman to scoop up the loose ball and score from five yards out.

His second kick, which came early in the second quarter with UD up 14-0, pinned the Hatters at the one thanks to hustle from gunner Chris Kohlbrenner who downed the ball right outside the endzone. That led to special teams points when the Hatters had to punt a few plays later and senior Jacob Gondek burst through the line and blocked the kick out of the endzone for a safety.

“It really won’t show up anywhere but his pinning the ball and guys like Chris Kohlbrenner covering those kicks, it helps our defense,” Stover said. “We had them back on their heels, in high school football it’s hard to go 90-95 yards every drive. The crowd’s going ‘why are you punting?’ well, we can pin them at the one.”

Early in the fourth, the Carl-Kohlbrenner combo connected again when Kohlbrenner downed a 37-yard Carl boot at the Hatters’ two-yard line. Two plays later, linebacker Tristan Cairnes sacked Hatters quarterback Robert Jackson in the endzone to give UD its second safety of the night.

“It makes the game so much easier, I had some punts inside the 10 that led to a touchdown and safeties for my team and we ran away with it,” Carl said. “It’s all a group thing. I’m sure to say thank you to everyone on special teams, especially the snapper. For everything, if I mess up, they can still make a play and we work as a unit.”

Carl chalked the special teams unit’s success up to effort. The guys on the punt team, kick team and extra point group all take their jobs seriously and they know if they do their job well, it makes everyone’s job that much easier.

“I’m super proud of my team,” Carl said. “I did my part but everybody else also did their part and the scoreboard shows it.”

Nick Rodriguez had been there before.

The junior could laugh it off later because of what he did after that pass and what had done beforehand to be ready when his teammate went down.

“You have to be ready for whatever can come,” Rodriguez said. “Colin going down wasn’t the easiest thing to deal with, but we had to keep playing. We’re a team, we’re a family and we do everything for each other.”

O’Sullivan, making the start against his former team, had thrown for a TD but got shaken up on a sack and fumble with about eight minutes left in the second quarter. The sophomore got checked out and did not re-enter the game, but he stayed on the sideline to support his teammates.

Rodriguez, who has been starting at linebacker this fall, was ready to jump in. After his first pass pick, the junior ran for a score and threw for another. His 20-yard pass to John Kohlbrenner wasn’t easy one, as the quarterback had to corral a high snap, then elude the Hatters’ pass rush before firing to senior John Kohlbrenner for the 20-yard score.

He got a good block from Micah Bootman on the edge to spring his 28-yard scoring run that put UD up 30-0 with 9:23 left in the third quarter.

“It’s all our hard work,” Rodriguez said. “Last year, that year was never supposed to go like that but this year our seniors came back with a different mentality and my class of juniors, we all had to play last year so we came back ready to keep it rolling.”

Rodriguez didn’t play linebacker after taking over under center, but like he filled in on offense, the Cardinals were able to fill his spot on defense without missing a beat. Stover said it’s a credit to Rodriguez for being ready and not sulking when he didn’t win the quarterback job out of preseason.

“Nick has experience, he has starts under his belt so I’m happy for him, it’s not an easy situation,” Stover said. “He didn’t go pout, he stayed game-ready then came out and played like that. He’s been a good teammate, it’s the maturity he’s showing. Some kids can’t handle that but he’s done a really nice job.”

Upper Dublin values versatile players who can be a factor on both sides of the ball and even special teams.

John Kohlbrenner has made a career out of being that guy. The senior lines up all over the place on offense, finds his spots on defense and is a tenacious special teamer. Because he can slide in at any number of places, Stover noted teams can’t key in on him as easily as they’d like to.

“It’s definitely fun doing that because it seems like every week there’s a new plan for me,” Kohlbrenner said. “Our school’s not as big so we need to have guys who are able to play those different positions.

Kohlbrenner, who has watched his younger brother Chris following in his any-role-needed  footsteps, said it’s a credit to the coaches who prepare every player as if they were starting so when something happens in a game, they’re ready.

“We learned a couple years ago, we’re only as good as our depth,” Stover said. “If your ones go out and you don’t have anybody to put in the game, it’s not a good formula going forward. We’ve been working with that next group really trying to catch the ones for situations like tonight.”

The win, coupled with a Unionville loss, unofficially pushed UD to the top seed for the District I 5A playoffs starting next week. From here out, it’s win or go home but the Cardinals seniors are excited for it.

“We’re definitely looking forward to it,” Kohlbrenner said. “We’ve been there the last three years and it’s the time of year you most want to be playing.”