Heller airs it out, Ridley flies by Upper Darby 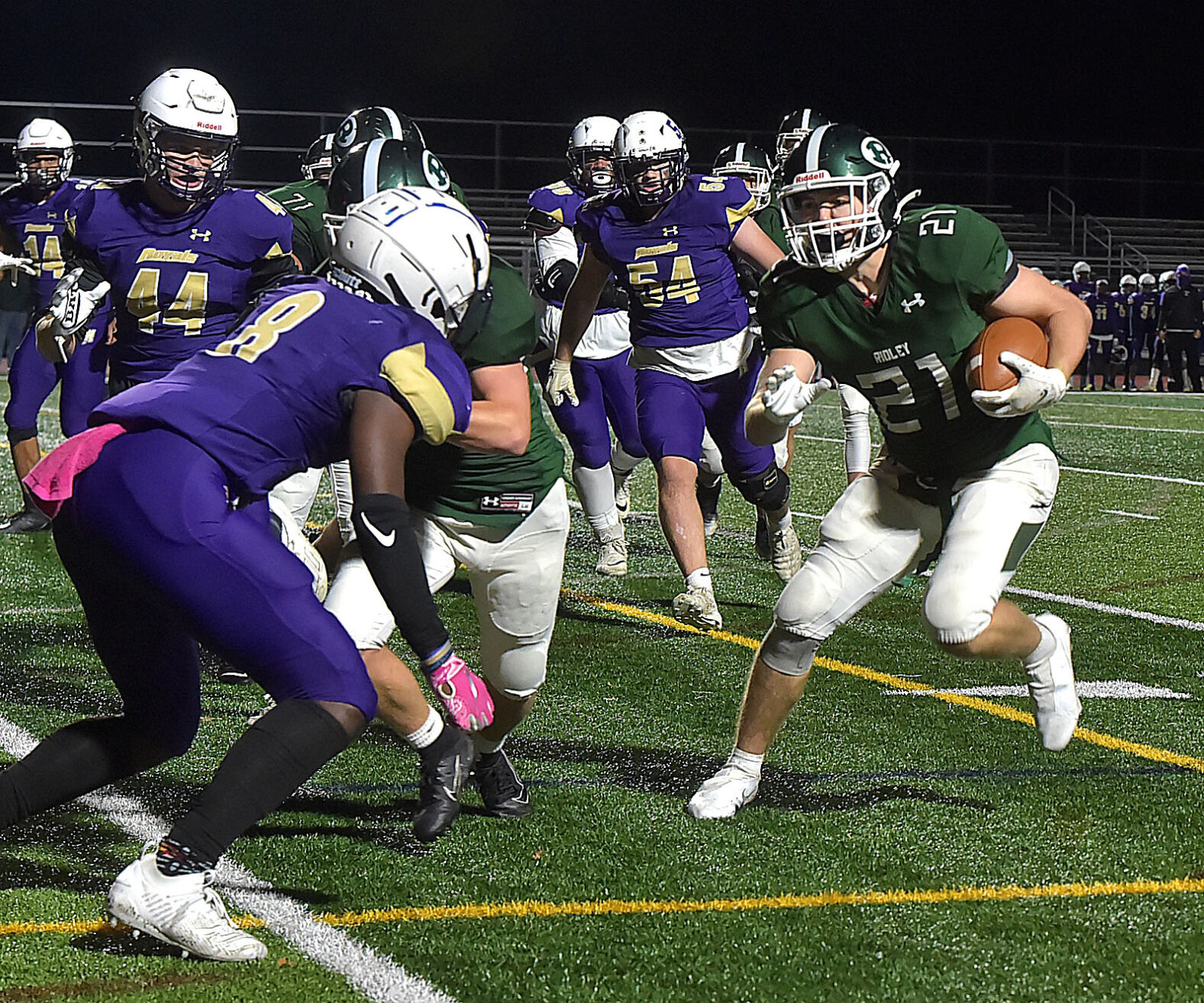 RIDLEY TWP. — When your first home game of the football season takes place on Mischief Night, you expect strange things to happen.

When Senior Night ceremonies are held before the opening kickoff, you expect a senior football player or two will emerge as among the top performers in the game.

Junior quarterback John Heller shook off a slow start and had a hand in helping the Green Raiders to their second consecutive victory. He was ably assisted by junior back Tahir Mills as well as sophomore receiver Paul Jackson and seniors Gavin Kingsborough and Mike Sfida, as each of Ridley’s four touchdowns came through the air.

The visiting Royals had two bad snaps on their first four plays, with the second resulting in an 18-yard loss and two points for the Green Raiders when the ball ended up in the end zone instead of in the punter’s hands.

Ridley led by that 2-0 baseball score until late in the first half, when senior Chris Vinci connected on a 24-yard field goal. One play later, it was Desmond stepping in front of a Donte Shaw pass, giving the home team a first down at the UD 20.

“I dropped into my coverage and ball just came right to me and I ran with it,” Desmond said. “It was great to be playing here on Senior Night and having good things happen for us.” Ridley’s Tahir Mills hauls in a pass over the shoulder in the second quarter to set up a Green Raiders field goal that contributed to what would be a 34-0 win over Upper Darby.

After two plays resulted in a loss of three yards, Heller found Mills in the end zone right in the center of the field 16 seconds before halftime, and Vinci’s conversion kick gave Ridley a 12-0 lead at the break.

“It was a corner concept,” the quarterback said. “I looked off the corner to my next progression, and (Mills) made a great play.”

Shaw saw that it would be a difficult reception to make, but he kept his concentration on the ball.

Heller, who completed only one of his first five passes for five yards, finished 9-for-14 for 107 yards. After halftime, his six-yarder to Jackson put the finishing touch on an 11-play drive, and the nine-yard scoring reception by Kingsborough came 20 seconds before the end of the third quarter.

Brian O’Dea stopped Upper Darby’s next drive three yards short of a first down, and Heller tossed a 31-yard strike to Sfida in the second minute of the fourth quarter to end the scoring.

“We know we have to keep working hard,” Heller said. “We have to go to Haverford next week, and they have a good football team.

“This should give us some momentum, and help us know that it’s up to us to work hard and be ready for what we have coming up.”

Bonner-Prendie’s defense great again in shutting down Lansdale Catholic
In an instant, Jahmir Dixon sends Radnor to a victory over Penncrest