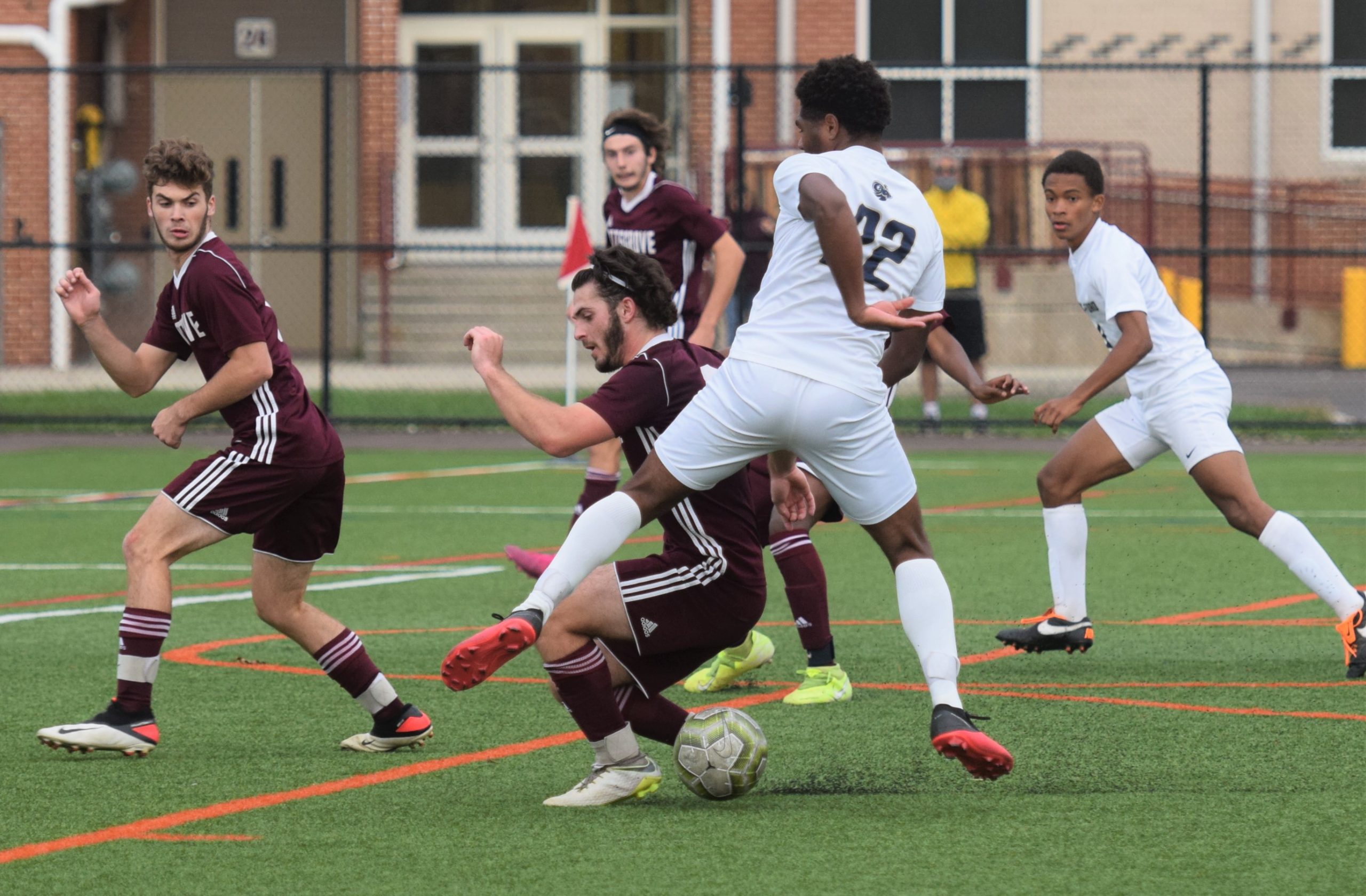 Pottsgrove 2, Spring-Ford 0 >> The Falcons claimed one of its biggest wins of the season and dashed the Rams’ Pioneer Athletic Conference championship hopes in the process with a two-goal win in their regular season finale Tuesday.

Troy Watts got on the end of a Mike Troutman cross with 7:08 to play in the first half and Shane Gleason with 2:25 left in regulation after Watts was fouled in the penalty area to seal it.

Goalkeeper Luke Kaiser had six saves in the shutout while getting determined defense from back four Cooper Fiore, Justin Collings, Kevin Michuki and James Thompson and midfielder Troutman.

Pottsgrove’s Mike Troutman clears the ball while being pressured by Spring-Ford’s Ben Goldberg.

“We worked so hard as a team. Even though we’re low on guys, we always come together,” said Fiore. “We’ve been together since 7th grade must of us, so we know we’ve always got each other’s back.”

“Every goal has a name to it, but it’s the entire team that scores every goal,” said Troutman.

Spring-Ford (6-4-1) was in a must-win situation for PACs while entering the day with a chance to win the outright title by beating Pottsgrove and Perk Valley Wednesday.

Andrew Merchant hit the crossbar in the first half and while the Rams dominated the majority of the second half, had little to show for it, only managing a single shot on goal during a sustained 20-minute stretch of pressure. It’s best chance was a Tommy Bodenschatz close-range shot but Troutman made a last-ditch tackle and blocked the shot with his face.

“I might forget that one now. It’s there for a reason and I’m going to lay my body on the line to block any shot for this team,” he said.

Spring-Ford sits at No. 11 in the District 1-4A power rankings.

Owen J. Roberts 3, Upper Perkiomen 1 >> The Wildcats won their PAC season finale to finish 5-7. The loss for Upper Perk (3-7-2) knocked it to No. 5 in the District 1-3A power rankings, a spot of our tournament qualification.

Russ had a five-save day in goal for PJP.

Boyertown 2, Methacton 0 >> First-time goals by Alina Friz and Audrey Swartley lifted the Bears over the Warriors in Tuesday’s PAC contest.

Friz scored in the first half, with Sam Devlin on the assist, and Swartley got her goal in the second half. Boyertown outshot Methacton by a 15-1 margin, and Ashlyn Crawford needed to make just one save to record the clean sheet for the Bears.

Shine put PV ahead 1-0 in the second quarter of an assist from Savannah Silvestre before DeWan tied the game in the fourth. Gabby DiPrinzio made five saves for Methacton, while Ashley Derrick saved eight shots for the Vikings (7-3-2).

Tuesday’s tie was the third of the season for the Warriors (7-1-3) who now enter the final day of the regular season a half game behind Upper Perkiomen (8-1-2).