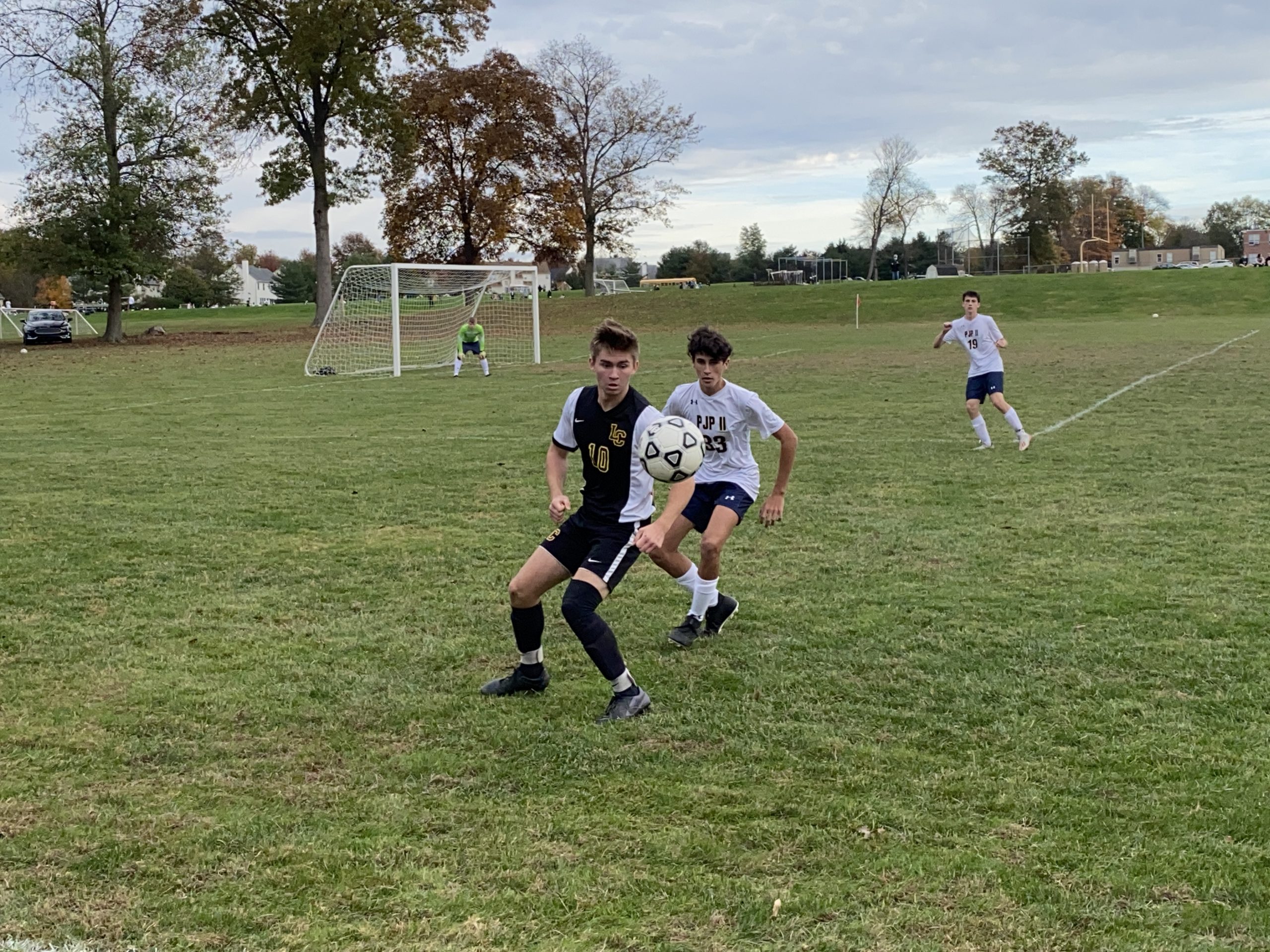 LANSDALE >> Eric Fernandez put his corner kick in the perfect spot for Owen Webster to rise up and head it into the back of the net for the Lansdale Catholic boys soccer team’s opening goal Tuesday afternoon.

The combination worked so nice, they did it twice.

Shortly after assisting on Webster’s first varsity goal, Fernandez again provided the helper for the senior center back – rolling a free kick to Webster for a shot into the far right corner and a 2-0 first-half lead over visiting Pope John Paul II.

“It wasn’t really a set play but he talked to me and like pointed to where the ball, he want it to go,” Fernandez said. “And I just played it.”

Fernandez struck for a goal before halftime with the junior adding a third assist as the Crusaders scored twice more in the second half and rolled past the Golden Panthers for a 5-0 Senior Day victory.

“We scored from all types of goals,” Webster said. “We had set pieces, from open play, we did it all. So it was really a nice win for us tonight. We came into the game wanting to have a nice, big victory coming into a busy week with a game tomorrow and over the weekend so we’re really happy with the result.”

Seniors Matt McDougal and Declan Mahoney each had a goal after the break – Fernandez assisting on Mahoney’s tally – as LC controlled the nonleague contest from the start and improved to 2-0-0 on a season that the Crusaders finally began last week.

In August, the Archdiocese of Philadelphia cancelled the fall sports season for its 17 high schools but reversed the decision, announcing Sept. 25 that teams could return to action. LC opened play last Wednesday with a 3-1 victory over Roman Catholic.

“It was an insane roller coaster because a lot of didn’t think the season was going to happen in the first place and the PIAA said the season was a go and then three days later on our first day of tryouts the Archdiocese cancelled the season,” Webster said. “So it was a lot of emotions especially being five of us our senior year but we’re really happy to be back and just enjoying every moment.”

Tuesday, Lansdale Catholic could have collected even more than its five goals if not for a few off-target shots – including Fernandez second-half effort that hit the crossbar– and a solid performance from PJP II goalkeeper Dylan Russ. The junior denied the Crusaders with a handful of strong saves, his best a sensational one-handed extended snare to save Fernandez’s close-range header in the second half.

“He just turned into like (Manuel) Neuer or something that second half,” said Fernandez. “He was doing really good.”

Pope John Paul II (1-5-0) started its 2020 campaign last Tuesday with 3-0 win over Phoenixville but since then has dropped its last five. The Golden Panthers are trying to navigate a tough stretch of four games in five days that finishes Wednesday with a 3:30 p.m. home matchup with Upper Merion.

“We really mentally we were not prepared to play this game against a pretty good team,” PJP II coach Sackda Viravong said. “I think if we would have a couple days off rest, get players to recover but there’s a lot of good players over there on that bench so most of our kids, it’s tough – this field is pretty big, so for them to run up and down this field, already three games already only in four days. That is tough.”

While shut out, the Golden Panthers did create some offensive chances. Down 2-0 in the first half, a long-range shot from Ben Rubinich was kept out by Kellan Ward reaching up with for a one-handed block. Still down two, PJP earned a free kick just to the right of the box but the service in was headed away by LC.

In the second half, a shot by PJP’s Scotland Simpson from distance with the keeper out of the goal hit the woodwork.

Lansdale Catholic also plays Wednesday, visiting Conwell-Egan at 3:45 p.m. The Crusaders are back home Saturday for a 10 a.m. contest with Archbishop Carroll.

With no Philadelphia Catholic League title to contend for, LC, Conwell-Egan and Carroll are among the five sides – Bishop McDevitt and Devon Prep the other two – vying to claim the District 12 Class 2A title and with it a spot in the PIAA tournament.

“You always have to have confidence in yourself and in your team and so from the get go we wanted to win it all,” Webster said. “We wanted to win PCL, we wanted to win states. Obviously PCL is cancelled, next up is now states so we want to make a run deep into states, hopefully we lift that plaque in the end of it.”

Webster put Lansdale Catholic up 1-0 as Fernandez sailed a corner into the middle of the box and with the keeper off the goal line Webster got in the air and headed a ball into the open net.

The senior made it a brace on a free kick from the middle of the field – Fernandez sliding a ball into the left side of the box Webster ran on to and laced a shot that one-hopped into the far right corner.

After picking up a pair of assists, Fernandez found the back of the net himself on a breakaway to extend LC’s lead to three. An Alex Kulp clearance dropped behind a pair of defenders and into open space. Fernandez raced to the ball, drove in and sent a shot Russ got a piece off but couldn’t stop from going inside the left post.

“This year, I’m playing more like a striker and just going to be trying to score goals,” Fernandez said. “But I can also make plays and be the playmaker if I have to.”

McDougal made it 4-0 in favor of the Crusaders in the second half, dribbling into left side of the 18-yard box, getting around a defender then sneaking a shot inside the near left post.

“Last year we were very defensive and all and this year we wanted to be more of an expansive team while still relying on our defensive capabilities,” Webster said. “So we really wanted to evolve ourselves and we felt we’ve really done so in the first two games of the season so far.”

Fernandez recorded his third assist on the Crusaders’ fifth and final goal – slotting a through ball by behind the backline to Mahoney, who cut to his right to evade a defender then blasted a shot into the net.

Boyertown seals up PAC title with win over Methacton … and a little help
Owen J. Roberts, Spring-Ford are co-champions of PAC girls soccer