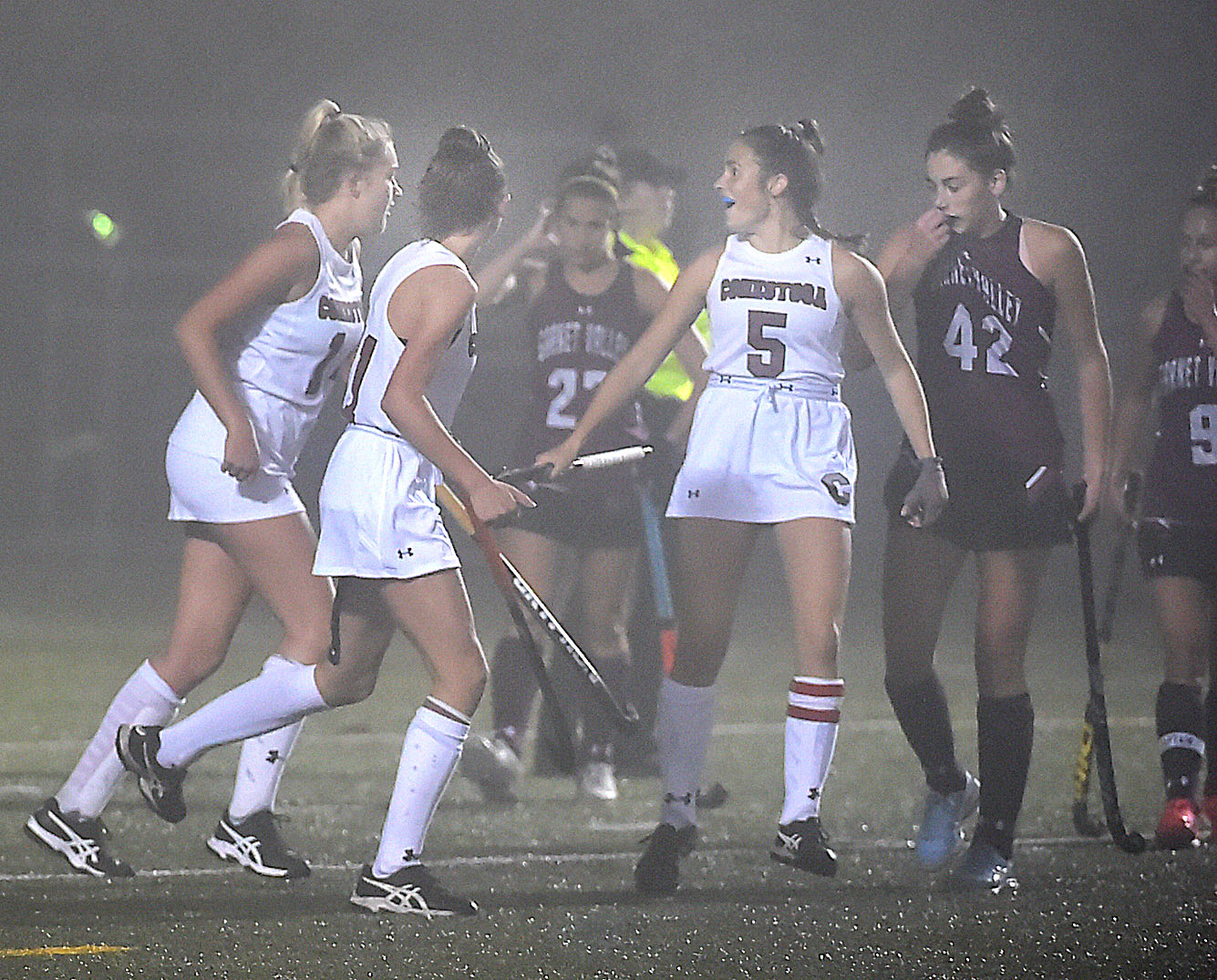 TREDYFFRIN >> On a cool, foggy night at Teamer Field, Conestoga got off to a red-hot start for a 3-1 win against visiting Garnet Valley Monday, in a battle of two unbeaten Central League field hockey squads.

The Pioneers jumped out to a 2-0 first-quarter lead with goals from senior forward Caroline Wisch and senior midfielder Jessica Mullin. Throw in some tough team defense, and that was the formula for the Pioneers (4-0). Garnet Valley drops to 3-1.

Conestoga’s (21) Kate Galica fires a shot against Garnet Valley in the first quarter. The Pioneers went on to a 3-1 victory.

The win was particularly sweet because Conestoga failed to win the Central League title last year for the first time in a decade, as Garnet Valley captured the 2019 league crown, in addition to posting an 18-0 regular season record and going to States for the first time. The Jaguars beat Conestoga by a 1-0 count last year.

“We were really prepping for tonight’s game mentally and physically,” said Conestoga senior midfielder Amanda Foster, a Drexel University commit. “We really want to regain the Central League title this fall, and our passing and team composure was good tonight.”

Conestoga head coach Regan Teti Marscher said, “We were really ready for this game, the girls were really focused at practice yesterday. We reflected a lot on our game against them last year and watched some of the tape from that game to prepare us for their style of play…. We worked a lot on our shooting and our offensive opportunities yesterday; we have a lot of speed, and we needed to continue to use it [tonight].”

Wisch’s goal, unassisted, was the first score of the game with 5:25 left in the first quarter. Three minutes later, Mullin fired a shot into the net with an assist from Wisch to make it 2-0 with 2:15 left in the opening period.

Garnet Valley (27) Theresa Ricci carries the ball as Conestoga’s (8) Amanda Hill defends in the second quarter. Conestoga went on to a 3-1 victory.

“It was nice to see Caroline and Jess step in where maybe Garnet thought it was going to be all about Kate [Galica], because she’s such a prolific scorer, she was the Central League’s leading scorer last year,” said Marscher. “Tonight was truly a team effort; I think our passing was really great.”

Galica scored with 3:14 left in the second period to give the hosts a 3-0 lead, then just before halftime Conestoga sophomore defender Amanda Hill came up with a big defensive save that kept Garnet Valley off the scoreboard.

“I thought Amanda’s save was the key play of the game,” said Foster. “Garnet Valley got one past our defensive line, then Amanda re-defended and made a great save.”

Marscher said, “That was a huge save by Amanda – that epitomized the whole night. I think our support of each other in our defensive efforts tonight was great – the moment a defender was beat, we had another one right behind [her], ready to help. That’s the theme we’ve been focusing on this season – that the whole is greater than the sum of our parts.”

In the third quarter, Garnet Valley began to penetrate Conestoga territory more frequently, and senior Tina Rawa, a first team All-Delco midfielder in 2019, scored an unassisted goal with 9:42 left in the period to cut the host’s lead to 3-1.

“In the beginning of the third quarter, I think we came out a little bit flat,” said Marscher. “But I think Garnet’s goal shifted our mindset to just getting right back into it and being super aggressive – our team doesn’t dwell on [its] mistakes much, which I think is a good thing.”

Conestoga kept the Jaguars at bay for the rest of the game, and a 3-1 victory.

Marscher said, “I thought Amanda Foster really had a great game; [senior defender] Sofia Ries came up with a huge play at the end of the game when [a teammate] got beat defensively; and I think our freshman goalie Alex [Lepore] had a great game too. From goalie to forward, it was a super team effort, and I’m so proud of them.”

Garnet Valley head coach Sandy Leiti said, “We have three starters out on injury, two of them on defense, and our defensive unit is completely new, but despite our injuries I thought we did a nice job. We knew we were going to be tested by Conestoga.”

“We moved her to center back at the start of the second quarter, it was her first game at center back, and she did a good job. I thought Maura Greek, our goalie in the second half (six saves) did a fantastic job; Tina Rawa generated offense for us; and [senior forward] Mary Rose Berry up offense worked her tail off.

“We’re [still] going for the Central League championship. We played tentatively tonight, we need to do a better job of stepping to the ball.”