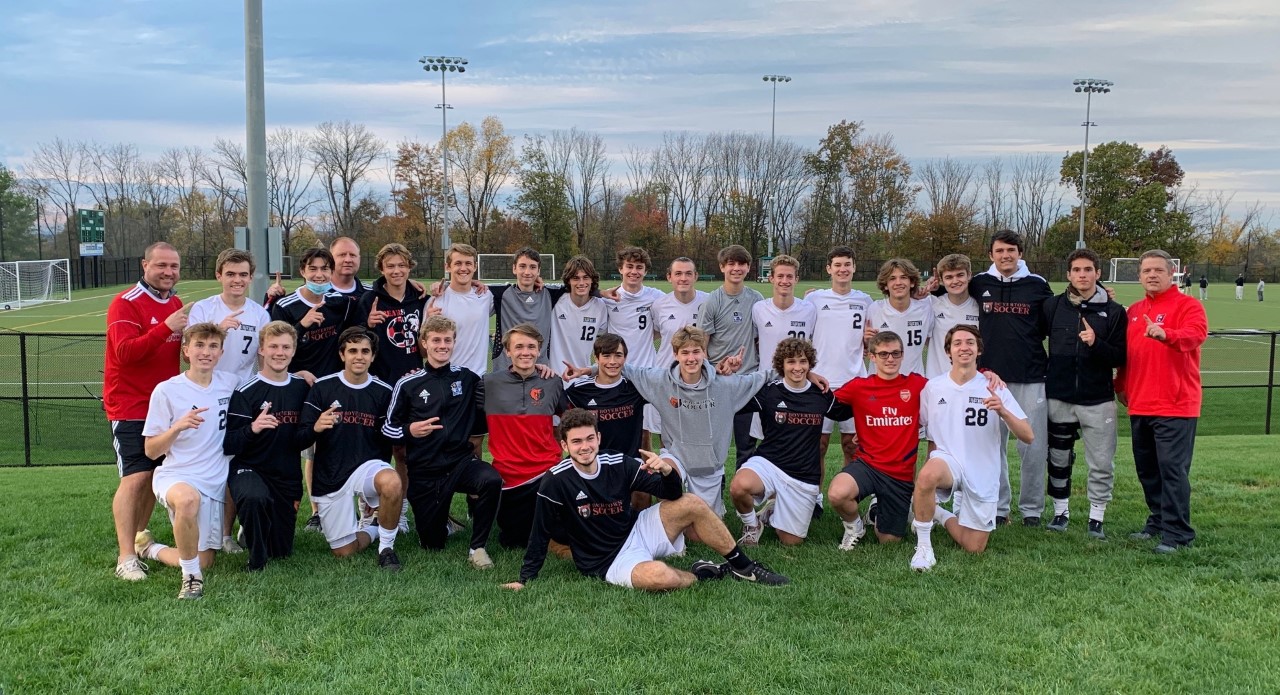 FAIRVIEW VILLAGE >> It was in control of its destiny.

For the last two-thirds of the regular season, as it turned out. Continuing that roll Tuesday, Boyertown was able to transform its 2020 regular season from a forgettable start to a Pioneer Athletic Conference championship finish.

The Bears took care of business at their end, rolling up a 5-1 victory on Methacton to put their regular-season record at 8-4. They got help from Pottsgrove, which topped Spring-Ford (7-4-1) 2-0 in other league action to knock the Rams out of the championship picture.

“We were hoping Pottsgrove would give it to Spring-Ford,” said Beckett Wenger, who fueled Boyertown’s early point production. “And they did.”

Coming off a stellar 2019 season — a PAC title, District 1-4A runner-up, PIAA 4A semifinal finish — Boyertown opened the current campaign on the downside of a 1-3 record and with dimmed hopes for a repeat performance. But the Bears responded with a 7-1 run the rest of the way, capped by their big offensive and defensive outing against the Warriors (3-8-1).

“The start of the year was odd,” head coach Matt Danner said. “The COVID pandemic, no preseason, and turnover in our roster. It was trial and error.

“But the kids pulled together. They played like a team on a mission.”

The game’s final outcome was overshadowed by the fact Boyertown was being played tight by the Warriors through the first 70 minutes. Its final three goals came in a 7:39 span, the last of them an “own” goal near the final two minutes.

“The final result was not indicative of the game we played,” Methacton head coach Dave Stevenson said. “While we were down 1-2, we moved the ball well and I was hopeful our possession would give us the opportunity to notch things up at 2-2. Unfortunately, however, miscues led to some ‘soft’ goals for Boyertown, that put the game out of reach for us.”

Wenger gave Boyertown a lead that would run the rest of the way just under 3-1/2 minutes in. Moving left to right along the Warriors’ end line, the Bear forward knocked the ball into the net at the 36:32 mark.

That lead held on its own until the second half, when Wenger converted a setup by Matt Kerr at the 34:09 mark. Methacton answered 72 seconds later, Graham Halfpenny connecting at 32:57 with Otto Hull on the assist.

“We came out flat, though we got up early,” Danner said. “I think they were trying to maintain what they did. We had chances, but their keeper (Charlie Bordanero) made saves.”

“I felt most of the play was pretty even, and the midfield was a battleground for possession,” Stevenson added. “Despite going down a goal early on a quick counter, we kept our composure and stepped up our efforts.”

The Bears’ end-of-game scoring flurry started with Kerr catching the Warrior goalkeeper out of position and hitting a shot with 9:48 remaining. A similar situation unfolded 2-1/2 minutes later, Dimitrije Radjelovic making the conversion.

“We got our motivation at the end,” Wenger said.

Then with 2:09 remaining, Josh Torrens was credited with having the last touch on the “own” goal. About another three minutes later, while they were celebrating the win, the Bears got even more excited when word came out about Spring-Ford’s elimination from championship contention.

“I love playing with these guys,” Wenger said, noting he has scored 12 goals in 12 games this season. “That makes me happy, and the balls from the teammates involved as well.”

Nick Willson was credited with a pair of assists for Boyertown, which had five shots on goal and a 4-3 edge in corner kicks. Matt Rothenberger had one save on the day in the Boyertown nets while Methacton’s goalkeepers, Bordonaro and Steve Remish, combined for three stops.

Danner estimated his team will be joined by Spring-Ford and Perkiomen Valley in the field for the District 1-4A playoffs, which will start next week.

“We”re excited,” he said. “One of our goals was to return to districts … and ultimately to get back to states. It’s going to be more difficult to do that (states), because you have to win districts.”

“Boyertown is a solid team,” Stevenson said, “and my congratulations to them on winning the PAC again. I hope they have a great run in the playoffs, as they did last year.”