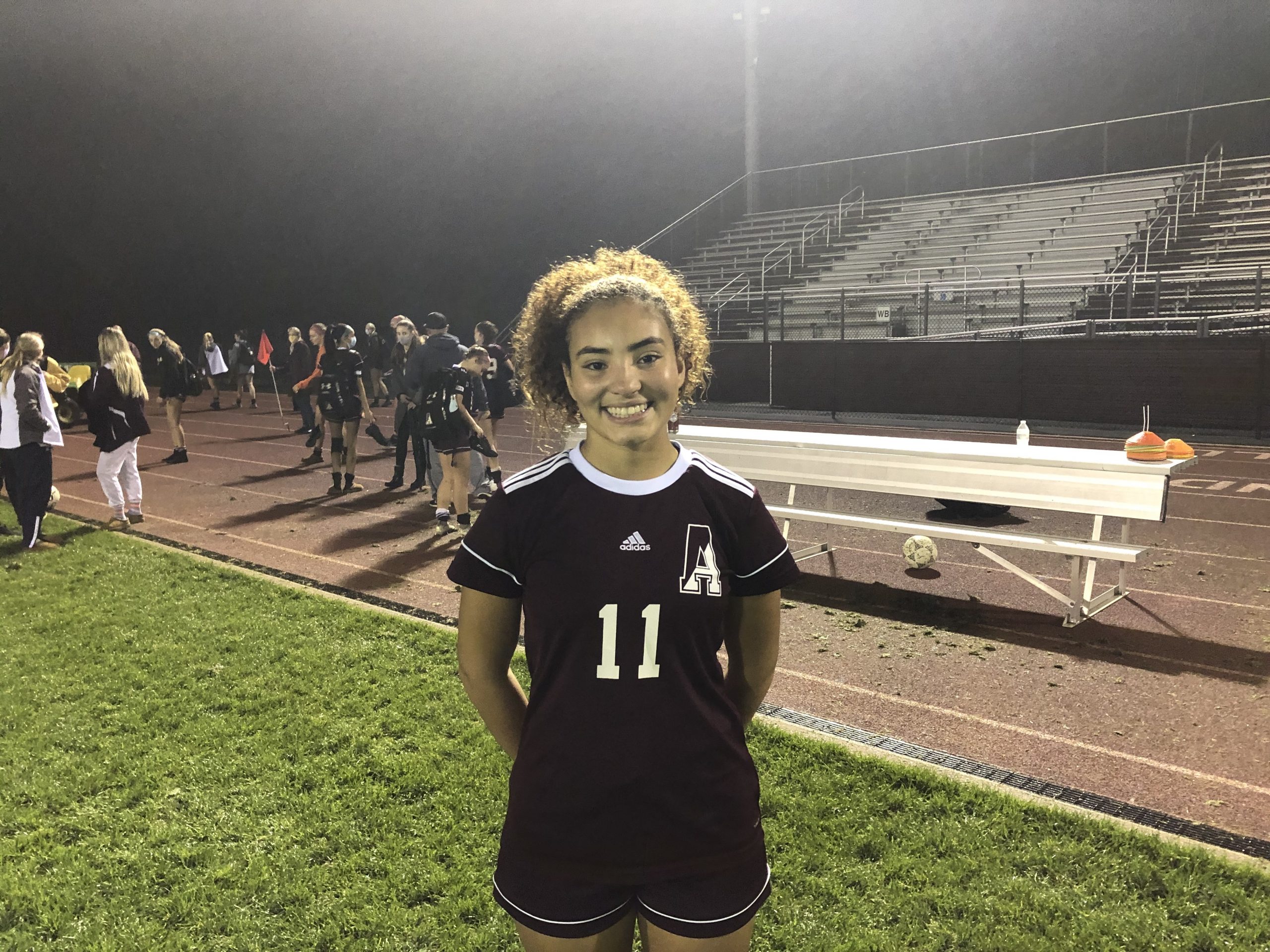 Abington's Myana Bebee-Gomberg scored in overtime to give the Ghosts a 2-1 victory over Wissahickon on Monday, Oct. 26, 2020. (Andrew Robinson/MediaNews Group)

ABINGTON >> Myana Bebee-Gomberg wasn’t going to give up just because her shot got blocked.

The Abington senior midfielder found herself at the far post early in the first overtime Monday night when a cross from freshman Piper McGinley came to her right foot. Her first touch was at goal, but was denied by a kick-save from the sliding keeper, only for the ball to come to her left foot for the tap-in goal.

All the finish did was win the Ghosts the SOL Liberty title with a 2-1 overtime win over Wissahickon, the team’s second conference title in the last three years.

“I was just persistent and wanted to get the ball in the goal,” Bebee-Gomberg said. “It felt pretty great. I was really nervous about this game but I wanted to win. It’s my senior year and I wanted to go out with this team doing really great.”

Wissahickon (5-4-2, 4-4-2 SOL Liberty), which entered the night seated No. 23 in the District 1-4A power rankings and desperately needing a win to have a chance at jumping into the 16-team playoff field, proved a formidable foil. When the teams met the first time this season, the Trojans tied the Ghosts 2-2 and remain the only side to take points from Abington (8-0-1 SOL Liberty) this fall.

That result fueled Abington’s strong close to the season. The Ghosts needed only to win Monday night or Wednesday against Plymouth Whitemarsh to lock up the Liberty title but senior co-captain Casey Touey didn’t want to wait.

Preseason, the future Drexel Dragon didn’t hesitate to say she saw big things coming for her squad. Conference title in hand and holding the No. 2 spot in the 4A rankings at the start of the day, it’s safe to say Touey and her team have delivered so far.

“It almost feels better because it’s our senior year and I’ve been playing with this group of girls for my whole entire life and it’s what we’ve been working for all those years we’ve been together,” Touey, who was also a starter on the 2018 SOL American champions, said. “Our motto this year is ‘no matter the score, don’t give up,’ and that’s exactly what we did. We were down 1-0, we fought to get that back and once we did, we knew we could win this game.”

A foggy, misty night provided the backdrop as the two teams clashed with plenty riding on the outcome for both sides. Abington’s grass field was a factor itself, with the slick surface giving the ball a little extra edge of unpredictability but it did little to slow the chess match between the Ghosts and Trojans.

Had they won, the Trojans were looking at another game to try and secure one of those playoff spots but instead saw their season wrap up on Monday. It’s an ending that came too soon for a selfless group that likely would have earned a playoff spot in a normal year, but 2020 has not been a normal year.

“The thing I’m most happy about is when I asked players about making changes, they were 100 percent team-first in their mentality,” Wiss coach Chris McDaniels said. “When I moved kids around, they said ‘I can do that for you.’ Everybody was more than happy to step in and it was a positive vibe all year.”

Both sides had chances in the scoreless first half and Wissahickon senior keeper Caroline Hassall made a few terrific stops to keep a zero on the board. At the break, Abington senior co-captain Abby Bautista, who only just returned from a knee injury last week, pointed out some weaknesses in her team’s formation and rallied her teammates to fix them.

Abington’s six seniors, including co-captains Touey, Bautista and defender Aly Holden, have set the tone for the Ghosts this season.

Wissahickon struck first on a terrific goal by Kylie Friedman that was born of hard work, unselfishness and skill. Lannah Werynski started the sequence by winning the ball off an Abington throw and absorbing a lot of contact as she sent it up to Friedman.

Friedman then played the ball wide to Emma Baker, who returned it to Friedman and the sophomore did the rest, shaking free of a defender then curling a chip shot around another back and into the net with 28 minutes to go.

“The players on the team make it exciting day in and day out, Lindsey (Schmidt) and Caroline, the other co-captains and I, we’re so sad to leave this team,” Wiss senior defender and co-captain Peyton Weber said. “We left everything we had on the field. It’s a great group of girls.”

Tremendous save by Hassall on a drive by Day pic.twitter.com/08n5Id8On7

Touey has made it a point after every goal the Ghosts have given up this year to remind her team to keep their heads up and just fight harder to get it back. The senior striker said for as much as the players yell at each other on the field, they’re incredibly close off of it and that’s what keeps them going even when they’re down.

Bebee-Gomberg, who didn’t start but played almost the entire second half and overtime, said the Ghosts had to get stronger in the midfield after halftime and she was determined to play stronger than she had in the first half.

“We’re really good at talking to each other, looking around the field and telling each other where to be, we share the ball and always try to pass it out wide,” Bebee-Gomberg said. “I really wanted our team to win the conference this year and I’m really proud we did that.”

Hassall made a superb save on Maura Day with 18 minutes left, pushing a driven shot from the Ghosts sophomore up and off the bar. Day however, came back a few minutes later but this time didn’t shoot and instead looped a ball to Touey. Touey did what she does best and one-touched a low shot across the ground to level the score with 15:52 on the clock.

Despite a couple shots from each team, including a good look by Friedman covered by Abington keeper Lannen Lare, the match headed to overtime for the second time this fall. A year ago, Wissahickon won in overtime at Abington to essentially secure a district playoff bid but a repeat performance was not meant to be.

GIRLS SOCCER 28:51 2nd half: Wissahickon 1, Abington 0
Kylie Friedman chips for a good goal off a nice build-up
Lannah Werynski and Emma Baker got it going pic.twitter.com/Az8we1puPD

Abington will close the regular season against PW on Wednesday, then prepare for the postseason. Touey didn’t want to look too far ahead and instead noted she’s just grateful to have more time playing with her team in a season that had plenty of doubt whether it would even get played.

“If we had the chance to play, I knew no matter what we would put up a fight because this means everything to us,” Touey said. “We’re a family, we have each other’s backs and we would all do anything for each other.”