Mercury Week 5 Football Review: Each team’s remaining slate and what’s on the line 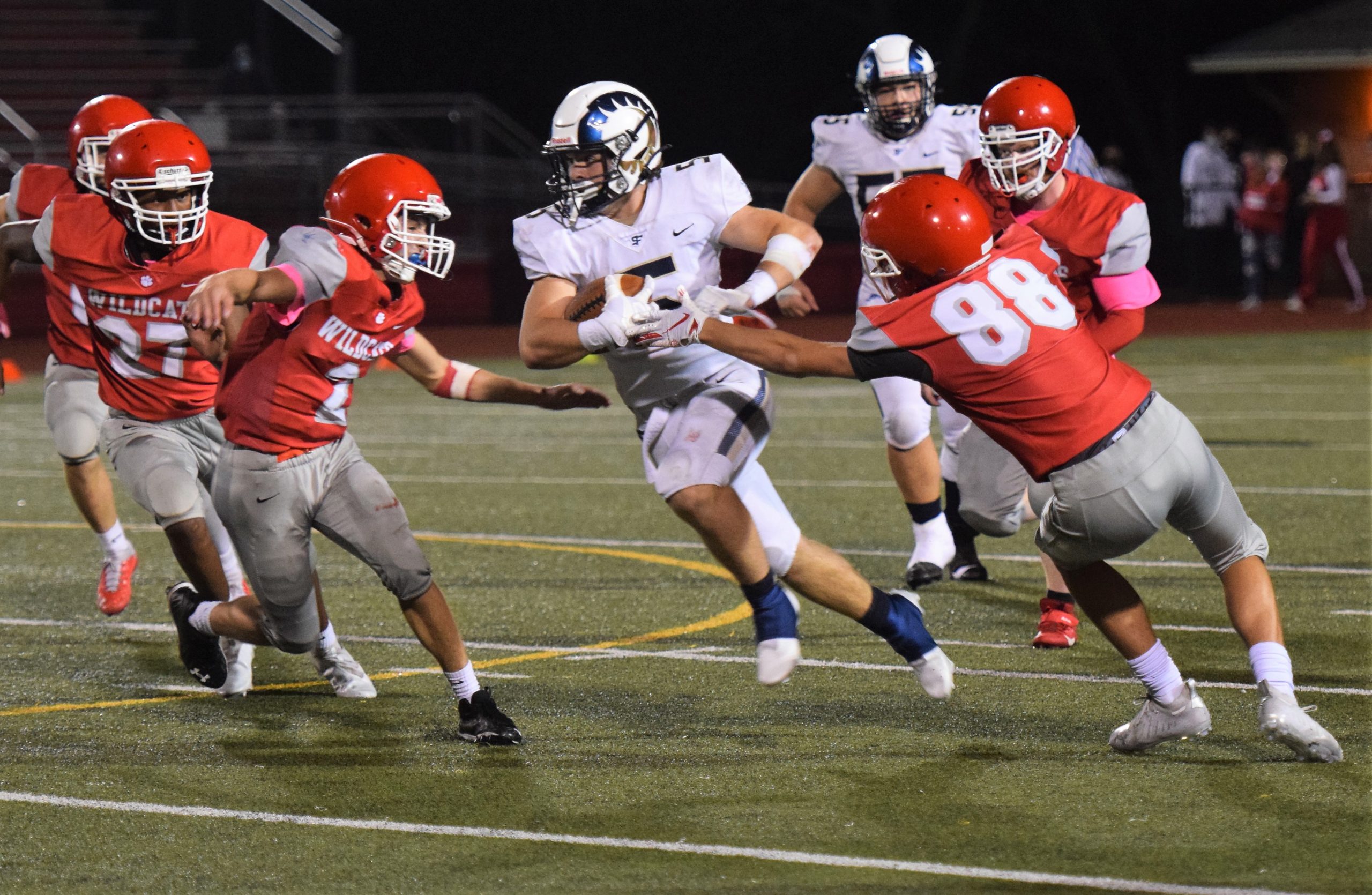 First things first: kudos to the Pioneer Athletic Conference and more accurately, each athletic department within the conference.

The league’s football season began on Sept. 25, with an even split of six teams participating, while another six squads either opted out or didn’t begin their season until October. A conference season required fifteen football games – three games every Friday night for five consecutive weeks. As of this week, the conference officially concluded that slate on time and without interruption.

Each game was played at its originally scheduled time, and having attended games at four of the six schools this fall (plus another at Pottsgrove), it’s fair to say the diligence of district employees and others at stadium entrances played an important role in allowing the timely playing of the conference season.

Better still, the schedule allows for a pseudo-Crossover Week this coming Friday, as four schools representing the Liberty (big-school) Division will take on four schools from the Frontier (small-school) Division, in an attempt at continuing the tradition that began with the two-division split in 2016.

Straight off clinching a second straight league title, Spring-Ford hosts Cumberland Valley, a District 3 school from the Mid-Penn Conference this coming Friday. The Eagles stand at 1-4 on the season but have accumulated the record against an impressive array of opponents including Altoona, State College, and Bishop McDevitt (Harrisburg). Chad Brubaker’s team will need the win in this non-conference tilt to maintain their No. 1 seeding for the four-team PIAA District 1 Class 6A playoffs, scheduled to begin Nov. 6. This game was originally scheduled for late August but was cancelled (at the time) due to the COVID-19 delay.

The crossover matchups are headlined by the first meeting of Perkiomen Valley and Pope John Paul II since the two divisions split. The 4-1 Vikings (currently No. 5 in the district power rankings) look to keep their own district playoff hopes alive with a victory, while a win over PV would represent a signature victory for the 2-0 Golden Panthers, one year removed from a District 1-3A title of their own and now playing in Class 4A, where they may not have enough games played in order to qualify for districts this season.

Even if Perk Valley doesn’t qualify for districts, it’ll be plenty busy through November with non-conference games scheduled with Daniel Boone and Quakertown. As for PJP, hope remains for rescheduling their game with Pottsgrove, which could serve as an unofficial Frontier Division championship for 2020 (no such honor will be awarded, but they are the two remaining undefeated teams from the division).

Two teams that are continuing their 2020 slates this weekend are Owen J. Roberts and Boyertown, who take on Upper Merion and Pottstown, respectively, in crossover matchups. The Bears look to get into the win column for the first time, while OJR looks to even its record at 3-3 when they travel to King of Prussia in what is currently scheduled as its season finale.

Pottsgrove and Methacton will meet at Methacton Friday night. The 2-0 Falcons are likely to continue playing through November – hopefully including a rescheduled matchup with PJP – while Methacton plans to travel to Council Rock South for a nonleague matchup next week. Pottsgrove has already scheduled Boyertown for next Friday.

Pottstown’s Jahzeel Watson hauls in an interception in the first half against Bishop McDevitt. (Austin Hertzog – MediaNews Group)

Around the Area >> Spring-Ford’s second straight league title came largely on the strength of a defense currently sporting a streak of three straight shutouts, but there were some offensive accolades as well. Nick Teets boosted himself into rarified air in program history with a 10-catch, 154-yard, two-score night. Teets is now over 1,000 yards receiving in his high school career – only the sixth Ram to accomplish that feat. By night’s end, Teets stood in the top five in both receptions and receiving yards in Spring-Ford history.

Pope John Paul II continued making up for lost time with a 50-14 victory at Upper Merion Friday. Any concerns stemming from the graduation of Kamal Gray have been stemmed by Rocco DiRico’s first two starts, sporting five touchdown passes against zero interceptions. This week, DiRico went 17-for-21 for 254 yards and a score and was aided by rushing touchdowns from five different teammates. Justin Kormos went over 100 yards receiving and caught DiRico’s touchdown pass.

Perkiomen Valley survived another stiff challenge, this one from Methacton in the Battle Axe Game. The Warriors led for most of the first half before the Vikings rallied for the 27-14 victory. Ethan Kohler had a rushing touchdown and added another score through the air on a screen pass taken 58 yards by sophomore running back Leo Hunsberger. The Vikings need to beat Pope John Paul II this week, and hope for some help around District ! if they hope to qualify for a scaled-down four-team playoff field.

Junior running back Logan Simmon starred for a second straight week as Upper Perkiomen downed Boyertown, 42-14. Simmon’s 277 total yards from scrimmaged featured four total touchdowns, three on the ground and another on a 63-yard reception from QB Hunter Flack. The Indians ran the gauntlet of Liberty Division squads, more than holding their own with a 2-3 record in league play.

Lastly, Phoenixville coach Anthony Ciarlello made his debut in the Phantoms’ opener, a 17-7 loss to Pottsgrove. Given the relative lack of prep time, Ciarlello expressed encouragement with his team’s intensity and physicality.

The Pottsgrove/Phoenixville contest was unofficially dedicated to the memory of Todd Van Horn, who passed away last weekend at the age of 51. A moment of silence was held in Van Horn’s honor before the game.

A legend in both communities, Mr. Van Horn was a member of the Phoenixville Hall of Fame and was named the school’s outstanding male athlete of the 1980s for his accomplishments in football, wrestling, and track and field. Van Horn also served as Dean of Students at Pottsgrove and coached wrestling and lacrosse.

Van Horn, who was further honored on Saturday morning at Pottsgrove High School, is survived by his wife Stephanie and two sons, Tyler and Zachary.