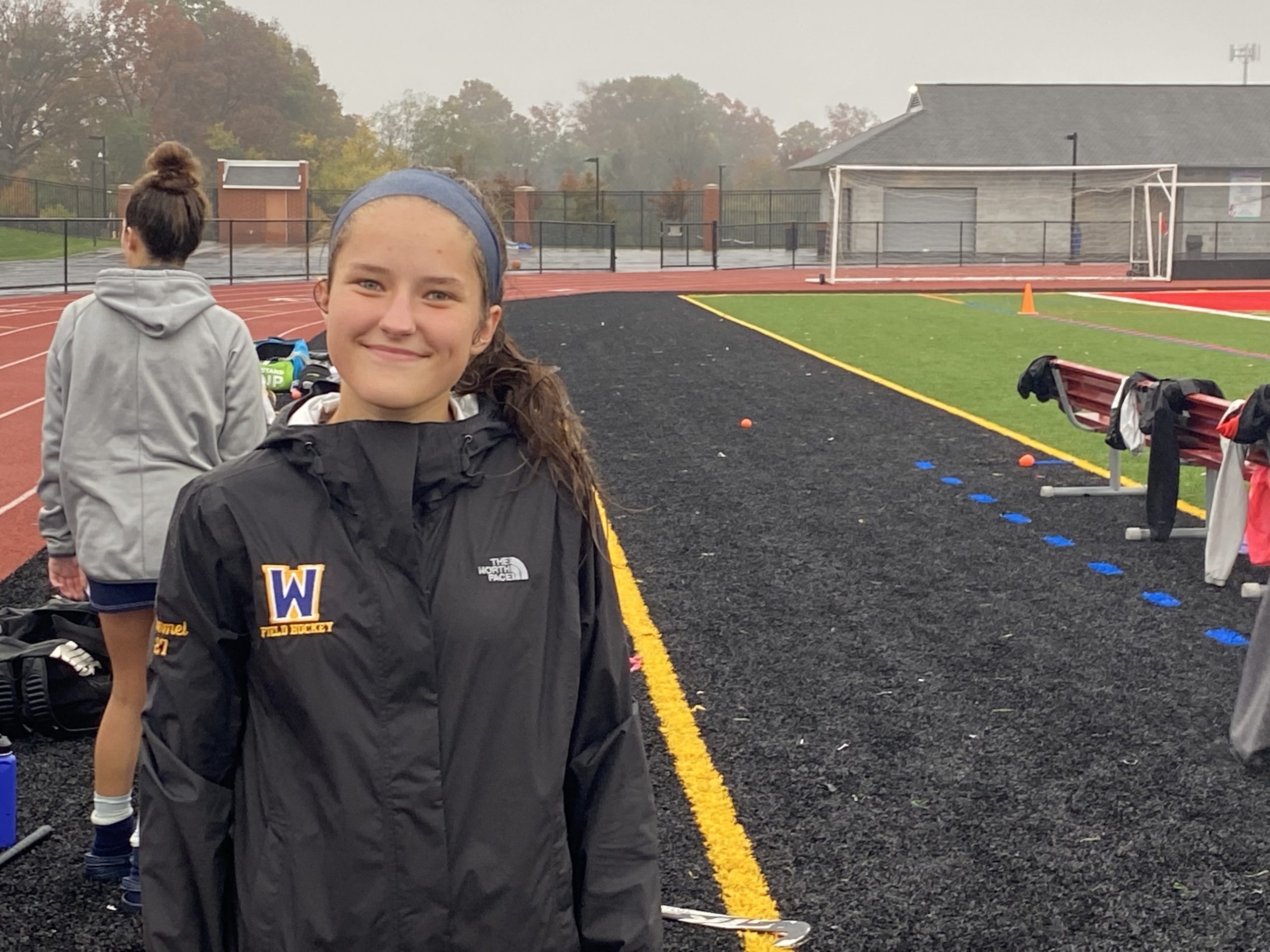 Wissahickon's Ella Hummel scored in overtime to give the Trojans field hockey team a 1-0 win over Souderton on Monday, Oct. 26, 2020. (Mike Cabrey/MediaNews Group)

FRANCONIA >> On a wet and dreary Monday afternoon, the Wissahickon field hockey team’s fundamentals shone through in overtime.

After 60 minutes of regulation went by without a goal between the Trojans and Souderton, Ella Hummel finally settled things in favor of the visitors – knocking in a cross from Aiden Drabick at the left post at 13:46 in the extra session to give Wissahickon the 1-0 win.

“We usually try to work on tipping a lot because it’s a really hard skill to get,” Hummel said. “So I was really focusing on keeping my stick down cause I saw that she was going to cross it. And so I had my stick down and I was ready.”

In a tight matchup between sides that both finished second in their respective Suburban One League divisions, Hummel’s tally helped the Trojans (10-3-0, 7-3-0 SOL Liberty) boost their District 1-3A power ranking and also get a busy week off to a positive start.

FIELD HOCKEY: Final (OT) @WissAthletics 1, Souderton 0. Ella Hummel knocks the ball into the cage off a cross from Aiden Drabick at 13:46 of overtime. pic.twitter.com/fFVGMNdWaW

“We’re all very happy with our win,” Drabick said. “We have been in overtime before and have lost in the first minute and it’s very different to be winning this time. And we’re very happy this time.”

Wissahickon opened the 7-on-7 OT down a player due to yellow card late in the fourth but netted the game-winner off a Hummel midfield steal near the sideline.

“We were focusing on keeping possession until we could get her back in and we were trying to play really defensively because Souderton is pretty good team,” Hummel said. “And since we were down we tried to just keep possession until she could come back in but our coach told us that if we had a breakaway we have to take it.”

Hummel cut to the middle then dropped off a pass to Drabick. The Temple commit drove to the right side of the circle and let go a cross that found a cutting Hummel between a pair of defenders. Hummel got a stick on the ball to bounce it inside the left post 74 seconds into overtime.

“I’ve always been taught to go to the outside then work your way in,” Drabick said. “And I just went to the baseline and passed it across.”

Souderton (6-4-1, 6-3-1 SOL Colonial) out-cornered the Trojans 10 to 7 – including earned a penalty corner in the final minute of the fourth – but struggled putting opportunities on the cage as the Indians had a three-game win streak snapped.

“We have to do a little more on our offensive end, put a little more pressure on the other teams,” Souderton coach Sue Casciato said. “But it was great to get an extra game in and so now we have to wait and see what happens the rest of the week.”

Wissahickon, meanwhile, created a good amount of pressure but until OT was thwarted by a strong effort for Big Red senior goalkeeper Jordan Michalak along with a pair of defensive saves from Taylor Weaver.

“She was making it very difficult,” said Drabick of Michalak. “She was a very good goalie, a very skilled goalie. Definitely one of the better ones we’ve played.”

FIELD HOCKEY: Souderton’s Taylor Weaver with a defensive save to deny a goal on a Wissahickon corner 4Q. pic.twitter.com/6Lmm1a9Xcv

With the win, Wissahickon now sits eighth in the district rankings while Souderton is a spot back in ninth. Top 16 teams qualify for the tournament.

“We should be in and we’ll be like right on the bubble,” Casciato said. “We probably will fall below eight so we probably, I would think, would be the away team which we don’t tend to play here too well anyway.”

Souderton sent a pair of shots wide in the first quarter – Ang Borisow putting her just left after the game’s first corner while an effort from Lauren Kenah’s effort hit outside the cage’s right post.

Drabick ripped a shot in the first quarter’s final minute but Michalak blocked it and kicked away the rebound.

“It’s kind of hard coming to a turf we don’t know,” Hummel said. “This turf is pretty slow compared to ours but since it was raining it actually kind of helped make it go faster. But it was hard to adjust to it and warm up cause we were kind of cold at the beginning.”

Wissahickon’s Kendall Crowley (5) tries to get past Souderton’s Ashley Paturzo during their game on Monday, Oct. 26, 2020. (Mike Cabrey/MediaNews Group)

In the second quarter, the Trojans came close to a goal on their first corner – Drabick dribbling in from the top of the circle then tapping a shot that bounced to the goal line. The ball, however, was stopped by Weaver with the Trojans unable to put it in during a pileup in front.

The Indians’ Ashley Magnus made a run from the left side but a diving block from goalie Alli Wood cut off the drive.

Drabick continued to be active in the Indians’ circle in the third but could not break through, with her hard blast off a loose ball stopped by Michalak.

“Our struggle was just finishing, really,” Drabick said. “We do a really good job of getting it up there and getting it into the circle and working it around the girls. We just have a tough time finishing. But we got it at the end when it really counted.”

Weaver came up with another defensive save in the fourth on a corner. Wissahickon’s Brynne Miller sent a ball through a crowd in the middle of the circle that found Kendall Crowley just behind the keeper. Crowley slid a shot at the cage but Weaver – stationed at the right post – kept the ball out to maintain the scoreless tie.