Upper Moreland explodes for 63 points in win over Plymouth Whitemarsh 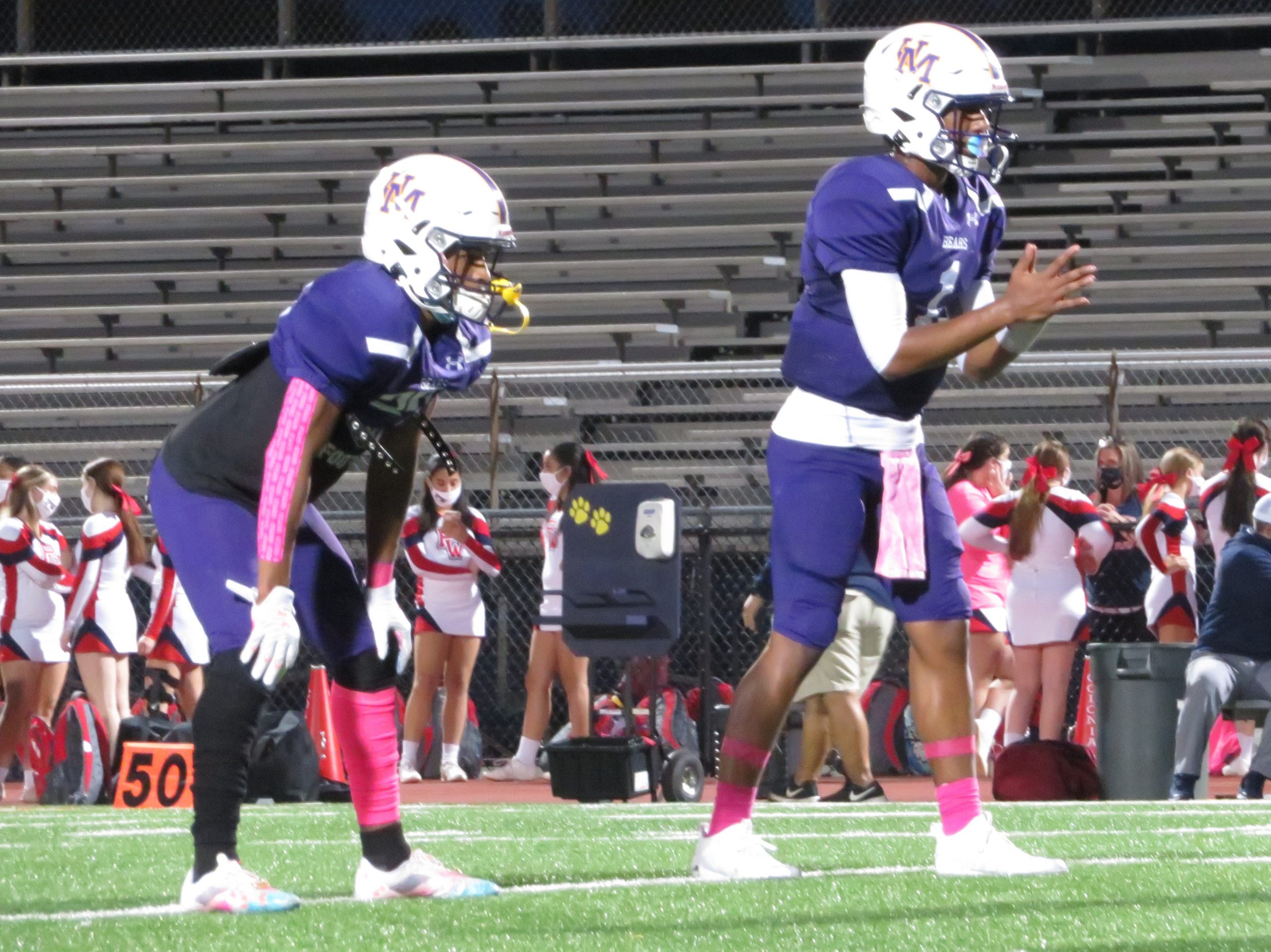 Upper Moreland running back Cameryn Jackson, left, and quarterback Byron Hopkins warm up prior to Friday's game against Plymouth Whitemarsh. The two juniors combined for seven touchdowns in the 63-35 win. (Ed Morlock/MediaNews Group)

“We knew from the gate that this team wasn’t able to hang with us I feel like,” Hopkins said after the Upper Moreland offense punted just one time over 48 minutes. “At practice we had to make sure that we came every day because last year they beat us pretty bad. We had to make sure that we came to practice prepared every day and all the coaches built up a good gameplan for this week. It was a good job by the whole team.”

Hopkins went 6-for-7 for 160 yards and two touchdowns. The first score was a 76-yard strike to Jahaire Johnson and the second a 25-yard dime to Anthony Broderick. He also completed a 45-yard pass to Jon Knight, who got tackled at the one-yard-line.

“My wide receivers are great,” Hopkins said. “At practice they make sure to always catch the ball and they did a good job today. I put it in a spot where they could catch it and they came through.”

“They’ve got some really special athletes over there,” Plymouth Whitemarsh head coach Dan Chang said. “Their quarterback, their running back, a couple of their receivers – they are very good athletes. They’re tough for us to defend.”

The Upper Moreland offense had help from both the special teams and the defense. Jason Lobban returned the opening kickoff 95 yards for a touchdown and Jackson took a kickoff 81 yards to the house later in the game. Shawn Herbert added six points when he jumped on a fumble in the end zone.

“I was surprised,” Hopkins said of the opening touchdown. “I was getting warmed up for offense and I saw the kick return. As soon as that happened I knew it was going to be a good day.”

“Two special teams touchdowns and a defensive touchdown,” Chang said, “it’s tough to win any games like that. Some of those are young mistakes – we’ve got guys out there who are learning and getting better. I told them we’ll continue to get better and work on each person and each thing at a time.”

The SOL American rivals were trading points early. After Upper Moreland’s kickoff return for a touchdown, the Colonials (1-3, 0-2 SOL American) responded with a seven-play drive culminating in a Tommy Hannon one-yard touchdown run to tie the game.

The Golden Bears re-took the lead and PW drove right back down the field to end the first quarter.

The second quarter began with the Colonials, trailing 14-7, having a fresh set of downs at Upper Moreland’s 16-yard line. Zion East picked up a first down on 4th-and-4, but a holding penalty made it 4th-and-15. A field goal attempt came up short and, two plays later, Hopkins connected with Johnson for a 76-yard touchdown.

“We’re making young team mistakes right now,” Chang said. “The penalties are untimely for us. That was just one of a couple of things we need to tighten up.”

One positive the Colonials can take from Friday’s loss was a better offensive showing after a 17-14 loss against William Tennent last week.

The Colonials posted 35 points against the undefeated Golden Bears and the offense totaled 367 yards.

“I think we got better offensively as opposed to last week,” Chang said. “We watched the film and we have to continue to see how we can improve.”

Aiden O’Brien led the way for the offense with 83 rushing yards and a touchdown while catching a pair of passes for 31 yards.