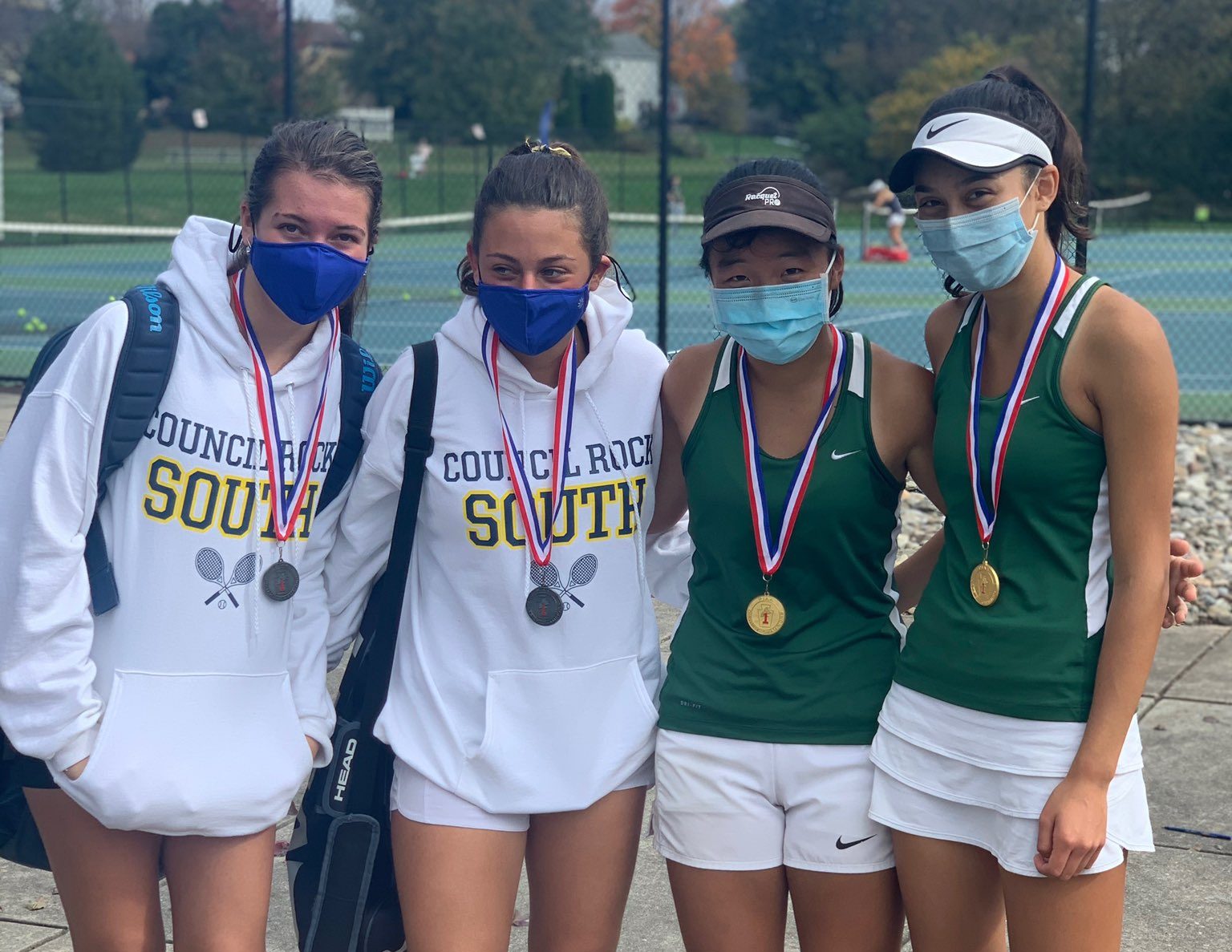 Liang and Nouaime defeated the top-seeded Council Rock South duo of Dasha Chichkina and Emma Traktovenko, 6-3, 7-6(7-1), in an epic final match for the District 1-3A Girls Tennis Doubles Championship. The Warriors’ pair will move onto states.

On Friday, Matriccino defeated Souderton’s Amanda Wang (6-4, 6-0) in the quarters before knocking off Unionville’s Leah Walter (6-4, 6-1) in the semifinals. Liang and Nouaime took down Upper Dublin’s Eileen Xiao and Eva Hunter (6-0, 6-0) in the quarters before a three-set (6-4, 4-6, 6-2) win over Pennsbury’s Maddie Walsh and Kyra Workman in the semifinals.

OJR’s Allison Root and Spring-Ford’s Lucy Olsen and Emily Tiffan also represented the PAC in the singles and doubles tournaments, respectively, on Friday. Root lost to Honer in the quarters (6-0, 6-0), while Olsen and Tiffan fell to Chichkina and Traktovenko (6-0, 7-5) in the quarters.

Spring-Ford 5, Methacton 1 >> The Rams played at Homecoming Saturday and came away with another PAC victory.

Akshay Patel started the scoring off a Tommy Bodenschatz cross. Andrew Merchant played another great cross for a far post finish from junior Justin Russell and Dylan Smith finished off the scoring in the first half putting away a Justin Russell cross.

The Rams conceded a goal to lose the shutout, but they got two more from senior defenders Trevor Jones and Ekow Asomaning in the second half. Assists were from Nick DiNenna on a corner and Mikey Sullivan on a cross. Methacton’s goal came from Chris Rowland.

Perkiomen Valley 2, Upper Perkiomen 1 >> Owen Slack and Matt Holmes did the scoring for the Vikings, helping them edge the Indians in Saturday’s PAC contest.

Upper Perk jumped out to the lead on an Aiden Heiser goal with 15:31 remaining in the first half. PV equalized before half on Slack’s goal from an assist by Holmes, who put PV ahead after drawing a foul in the box and burying the ensuing penalty kick with over 28 minutes remaining.

Moser and Matt Selders added assists in the win.

Daniel Boone 2, Conrad Weiser 0 >> Connor Stuart scored a goal in each half to lead the Blazers over the Scouts in Saturday’s Berks League action.

Nate Millard was credited with an assist — a day after kicking two field goals for the football team — on one of Stuart’s tallies. Boone (7-3-1, 9-3-1) also got five-save goaltending from Zach Fick in the shutout.

The win pushed the Wildcats (9-1-1) into a tie with Spring-Ford atop the PAC standings.

Spring-Ford 1, Methacton 1 >> Jess Lineen scored with little more than 1-1/2 minutes left to play Saturday, bringing the Warriors back for a tie with the Rams in their PAC game.

Spring Ford opened the scoring in the 29th minute with a Reese Kershner goal from a Molly Thomas corner kick. Methacton found the equalizer with 1:39 remaining in the game, on senior captain Lineen’s header from a Ruby Murray free kick.

Daniel Boone 3, Conrad Weiser 0 >> Alexandra Woodcock had a goal and an assist to help the Blazers (9-2, 11-3) clinch the Berks League’s Division II title Saturday with a win over the Scouts.

Nicole Brown and Lily Ferguson had other goals for Boone (9-2, 11-3), with assists credited to Gabby Fontana and Emma Kay. Jenna Heasley made four saves in goal to secure the shutout.

Daniel Boone 1, Conrad Weiser 0 >> Hannah Huddleson scored off an assist from Clara Lacek to lift the Blazers (5-4-1, 9-5-1) over the Scouts in Berks league play Saturday.