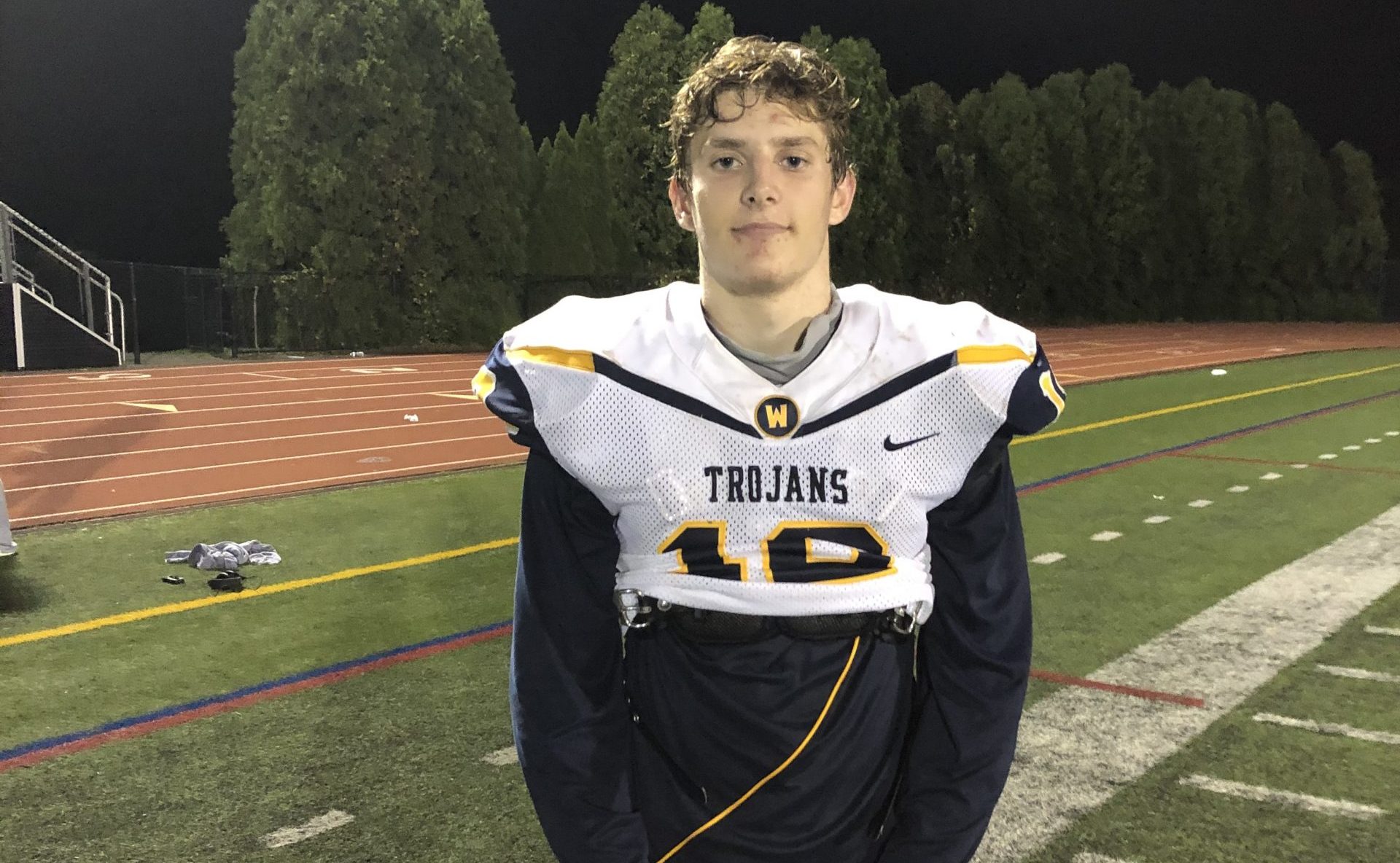 WARMINSTER >> It’s not a habit Wissahickon necessarily wants to have, but one it won’t rush to get rid of either.

“When you do things twice, you’re starting to make a habit of it,” Wiss coach Bruce Fleming said. “We don’t like to, but we’ve shown if we need to, we’re ready.”

After one quarter, it looked like the teams could be in for a long night of trading scores. The Panthers (1-3), who celebrated Senior Night and saw the return of coach Rich Clemens to the sideline, didn’t need long to get going.

Senior Fernando Delgado took the Panthers’ first offensive snap of the game on a sweep, made a cut and burst through a hole and used his track speed to race away for a 91-yard touchdown.

Wissahickon (3-1) tied the game up late in the fourth quarter when Aidan DeFeo found Intrieri for a 40-yard touchdown that came on a 4th-and-13 play. The positive vibes didn’t last long, as the Trojans botched the extra point. They then fell behind further when Tennent’s Ryan Emmerich returned the ensuing kickoff 68 yards but Wiss senior Michael Fath blocked the extra point to keep the lead 13-6.

“We were physical,” Clemens said. “Also, the ability of the team to stick together and remain in the game whenever anything happened was huge. We had a couple plays were these are things that a lesser character group of individuals falls apart. They didn’t fall apart, they stepped up, accepted the challenge and weren’t able to get the breaks today.”

Neither team got into much of an offensive rhythm the rest of the first half with every drive after the kick return ending in a punt or turnover. Tennent quarterback Matt Miller hit Emmerich on a long pass at the end of the first half, but the receiver was tracked down at the 20 as time expired to keep the score 13-6.

Tennent received the second half kickoff and promptly put together the kind of drive that had the feel of a game-changer.

The Panthers strung together a 19-play sequence that included four third down conversions and covered 79 yards from their 11 down to the Wissahickon 10 while grinding 10 minutes off the clock. However, the Trojans defense walled up at the end, forcing William Tennent to send out the field goal unit.

What had seemed to building to a winning drive for Tennent turned into a winning moment for the Wiss defense when Fath burst through and blocked the 27-yard field goal try.

“It was huge getting that stop and definitely gave us the momentum, for sure,” Fath said. “That’s what we needed. It’s what we do, we’re a second half team and we tend to make plays like that in the second half. We need to play a complete game still.”

Fath chalked his kick-blocking prowess up to little more than effort.

“You have to go hard on every play, some guys will take plays off on extra points and I don’t take any plays off,” Fath said. “I see a guy lined up across from me, I’m running through him every time. It’s something I’ve learned to do, I’ve gotten a couple of those in my high school career and it’s just about putting in the effort on every play.”

The senior lineman, who is listed at 6-foot-3 and 285 pounds, made a point of emphasis in the postgame huddle to his teammates that the Tennent side of the scoreboard still read 13 points. Fath said the defense felt it shouldn’t have given up any points but posting a shutout in the final three quarters was a good consolation.

Not only that, the defense had three of the game’s most crucial plays in the second half and overtime with the blocked kick and both of Intrieri’s interceptions.

“The guys are really locked into what we do, they thrive in our defense and understand their responsibilities,” Fleming said. “Our defensive line just applied pressure. In the second half, I rarely called a blitz, it was just guys moving the line of scrimmage back and the linebackers flowing back and forth.”

Intrieri is a three-sport athlete at Wissahickon, so versatility is kind of his thing.

Prior to Friday, he hadn’t spent an entire game playing free safety but he gave the coaching staff little reason to not keep him there next week. The senior, who recently committed to Ursinus to play lacrosse, was firmly locked in when it mattered most.

“You don’t really get blocked that much and you can just read the quarterback,” Intrieri, who also plays guard in basketball, said. “You’re able to get that jump on the ball and it makes it a lot of fun.”

A promising Wiss drive was thwarted when Tennent’s Brandon Steir picked off a DeFeo pass around midfield but once the Panthers were backed into a 3rd-and-15, they had to pass. Reading the play like he had the answers ahead of the test, Intrieri jumped the route at the Trojan’s 41 and returned the ball all the way to the Panthers’ 14.

DeFeo would hit Jaylen Quick for a touchdown a play later and the extra point knotted the game with 5:15 left, but Intrieri was a little upset he didn’t take the pick back himself.

“That’s a good question, I got caught looking at the left pylon and the quarterback ran me down,” Intrieri said. “I can’t let that happen again.”

The 6-foot-2 senior also caught three passes for 68 yards and was in on his share of tackles to go with his two interceptions.

“Jackson is a phenomenal athlete so even though he’s playing that position for the first time over a full game, he has the football intelligence to make the play that’s needed,” Fleming said.

William Tennent has been working to build a winning culture since Clemens took over and this year’s senior class has been a large part of it.

The coach, who stayed in constant contact with his players and assistants while health concerns kept him off the sidelines the first three weeks, downplayed his return and said it’s all about his players. While the game ended on a tough note for the Panthers, Clemens was confident they would bounce back next week.

That’s a credit to the senior class which has formed the core of this year’s squad.

“They work hard and come to work every day even in crazy circumstances like we’re in now,” Clemens said. “It’s a credit to the players and the rest of the coaches for keeping everything rolling the same way. This group is not the type to sulk, they’ll be up and ready to win the next week.”

Wissahickon lost the overtime coin toss, but when the Panthers elected to start on defense, the Trojans saw it as a win.

“We wanted offense first because we knew what our o-line was going to do,” Wiss senior lineman Kareem Roberts said. “We did just what we wanted to do: push that running back in.”

The Trojans took the lead on the first overtime possession when Kyle Lehman got in from five yards out thanks to a big push from his line.

“We’ve been working for it, we have a vengeance this year, we’re coming for everything,” Roberts said. “We all remembered Coach Flem yelling at us that we can’t give up, that’s all it is, it shows on the field that we don’t give up.”

The defense stuffed Delgado on the first play of Tennent’s overtime possession, then lined up for what would be the game-ending moment.

“They had trips to the right and I was just lurking in the middle of the field,” Intrieri said. “They had a guy run a little speed-out, I saw the quarterback roll to his left so I had a feeling he was going to throw  and I just jumped it and called game.

“We weren’t winning the entire game last week and ended up winning in overtime. We figured why not do it again?”