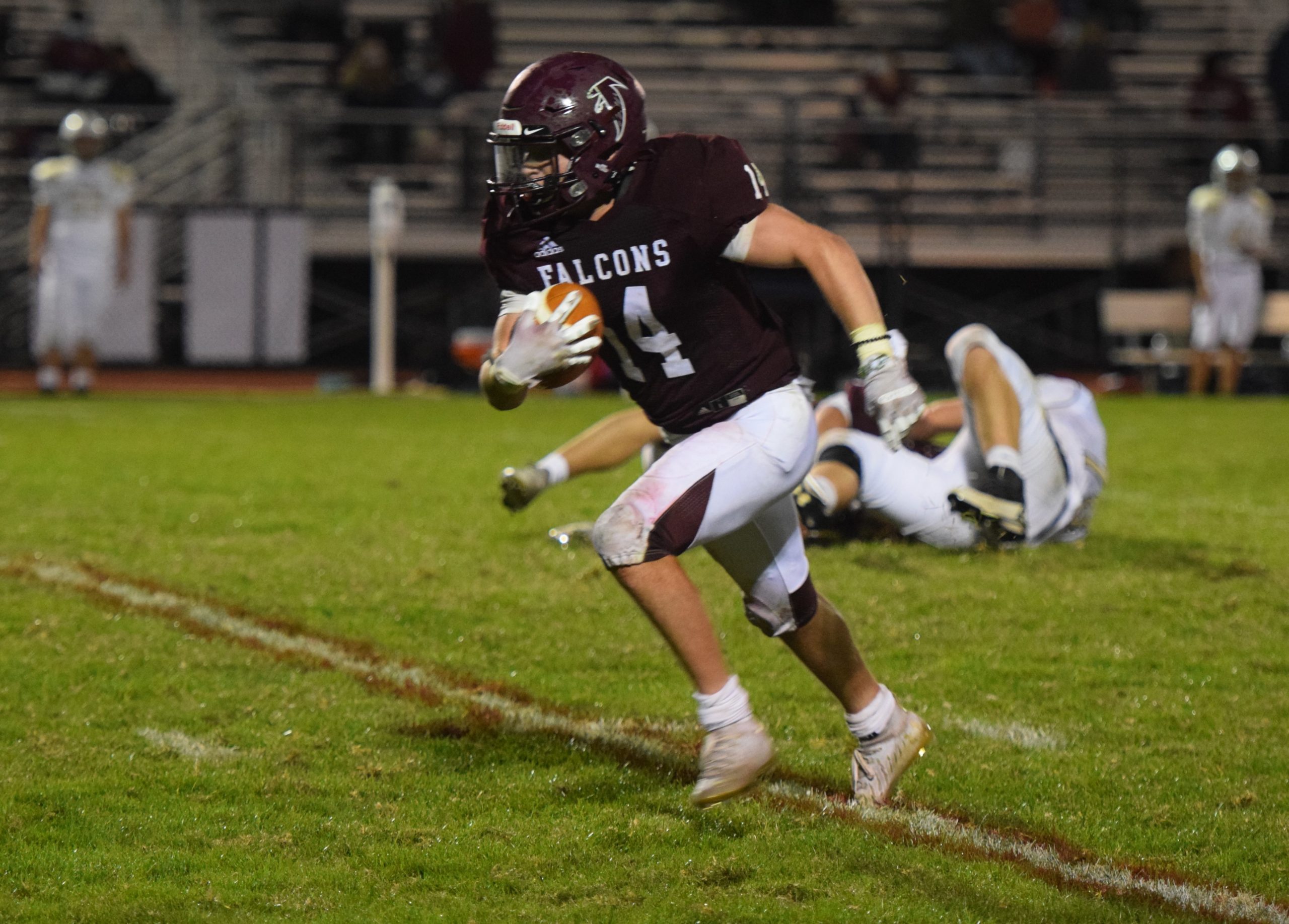 PHOENIXVILLE >> Senior Rylee Howard has been leaving it all on the football field for the past three years, as a starter both on offense and defense.

Now in his final season, Pottsgrove’s running back/free safety is at his best for the Falcons.

The 5-10, 170-pounder was all over the field as Pottsgrove defeated stubborn Phoenixville, 17-7, Friday night at Washington Field.

Howard scored two touchdowns on a 70-yard kickoff return on the final play of the first half with no time left on the clock, and added a 55-yard fumble recovery and run for a score in the second half. Howard also intercepted a pass and rushed for 65 yards on 22 carries to pace the Falcons (2-0).

“Obviously, we made some mistakes, but we came back and made some good plays,” said Howard. “We make up for them. We have some great players and a great coaching staff. It’s a team effort. We are all in the right places at the right time. We have a good offensive line and a good defense.”

Junior linebacker Shane Caffrey also had an interception for the Falcons and saw action as the backup quarterback at the end of the contest. Junior Ryan Sisko stepped in as the starting quarterback for Pottsgrove.

Pottsgrove senior Luke Kaiser broke up scoreless duel on a 21-yard field goal in the second quarter with 1:52 showing for a 3-0 Falcon lead. The football/soccer player boomed punts and kickoffs all night. His opening punt of the evening covered 58 yards.

Phoenixville, playing its first game in the COVID-19 pandemic delayed fall season, climbed back to take the lead on a 3-yard jump pass from junior quarterback Tre Davis to junior running back Owen Koch with 1.8 seconds left in the second period. Senior Jack Kelly added the extra point for a 7-3 Phantom lead.

The Phoenixville touchdown was set up by a 43-yard pass from Davis to sophomore Ahmid Spivey down the right sideline.

But the lead was short-lived as Howard returned the ensuing kickoff for a touchdown.

“Rylee is the definition of a football player,” said Pottsgrove coach Bill Hawthorne. “He is our leader and is a workhorse on the field. He is really a special player, and he does it the right way.”

Hawthorne also applauded Caffrey for his showing on defense. The Falcon boss said Caffrey brings a lot of energy to the unit.

Up front the Falcons got strong games from senior linemen Manny Allen and Ethan McHugh.

Hawthorne said injuries have hit the Falcons hard in the early going. They are without some 11 players, including three of their top four running backs.

“We don’t make excuses,” said Hawthorne. “We use the next-man-up mentality, and we have had some fantastic Pottsgrove teams.”

Hawthorne also praised Phoenixville, which played its first game of the season and also celebrated its Senior Night for band members and football players.

“Give Phoenixville a lot of credit,” said Hawthorne. “They are going to be good for a while. They are very well-coached. They left it all out there.”

It was the Phantoms’ first game under interim head coach Anthony Ciarlello, who lauded his group especially in light of not having had any real game action prior to Friday.

The Phoenixville defense limited Pottsgrove to 73 yards from scrimmage on 37 plays. But the Phantoms were hurt by turnovers, penalties and other mistakes.

Aidan Foley, Koch and Dylan New provided the linebacker play on defense for the Phantoms. Solomon Ortiz had a solid game at tackle on both sides of the ball. Other active linemen included Roman Ciaverelli, Liam McAdam, Kael Gilbert, Nolan Martin and Jamie Gray Jr. Andy McMahon left the game early due to an injury.

NOTES >> Koch rushed for 98 yards on 15 attempts, and Davis had 53 yards on 10 tries. Davis also passed for 88 yards. … Davis also played defensive back and was a punter and kick returner. … Max Strunk made an outstanding catch and had two receptions for 42 yards.