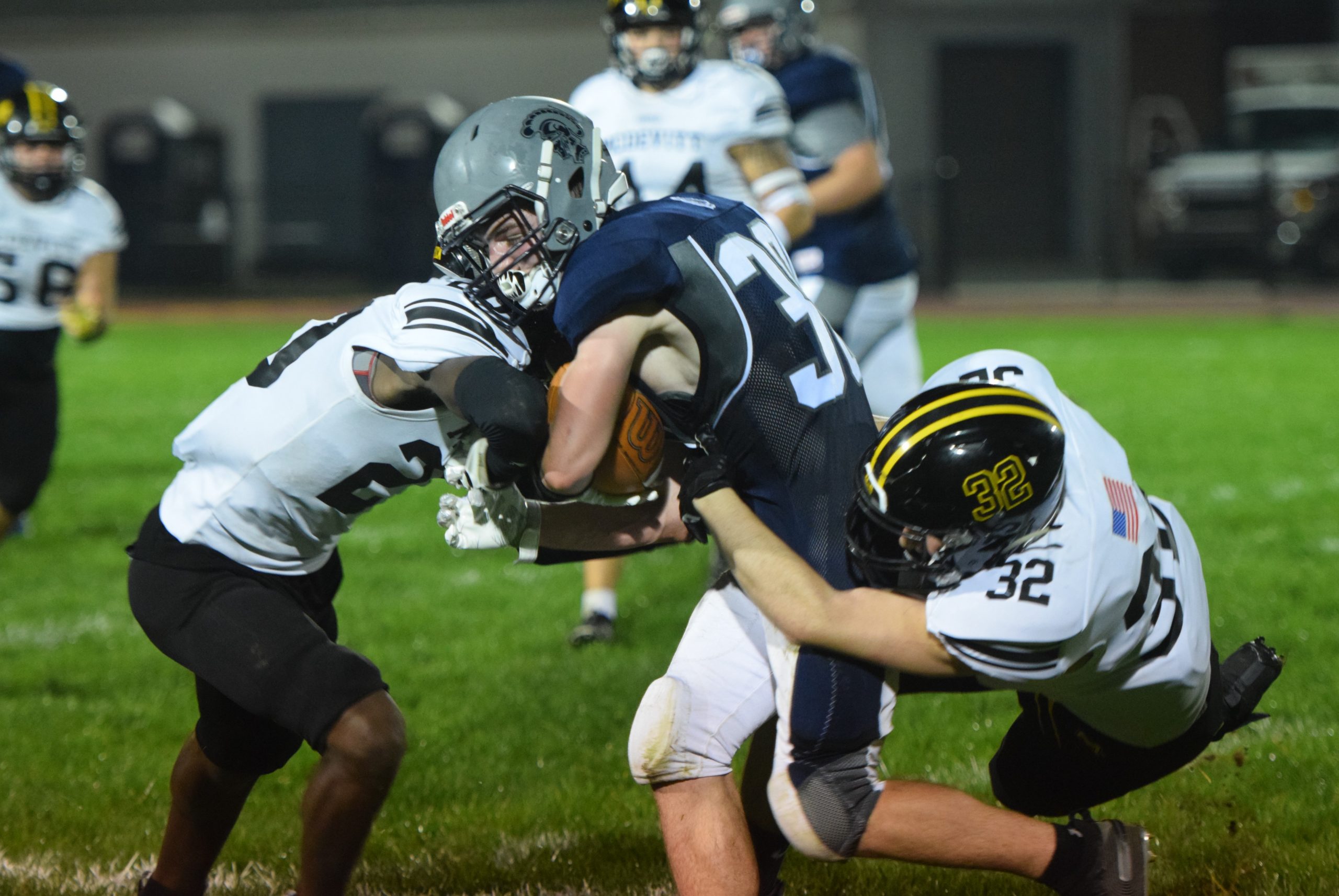 Bishop McDevitt's Johnny Coonahan (32) and Kelvin Zoomie team up to tackle Pottstown's Jared Hewitt on a carry in the first half Friday. (Austin Hertzog - MediaNews Group)

POTTSTOWN >> The contrasts were striking.

So, too, was the final result attributable to them.

Pottstown, making its delayed 2020 debut with a youngish roster having less than a month’s preparation time, hosted Bishop McDevitt of the Philadelphia Catholic League, a Class 2A power returning a large part of its 2019 roster and with one game under its belt: A 35-14 loss to perennial state contender Archbishop Wood.

With that in mind, the 42-6 dustoff the Royal Lancers administered to the Trojans should have been seen coming. What may not have been anticipated was how close Pottstown stayed to its non-league guests in the first half.

Trading touchdowns in each quarter, McDevitt went into the break leading by a hair-thin 7-6. But a turnover-fest in the third — three fumbles, a blocked punt and a strip on a kickoff — proved both Pottstown’s undoing and the Lancers’ opportunity to bring a running clock into play, courtesy of 35 unanswered points in the frame.

A big windfall for some teams? Perhaps. But not so much for McDevitt.

“We’ve had explosive teams in the past,” head coach Mike Watkins noted. “Our defense and special teams did a heck of a job.”

Pottstown’s Jahzeel Watson hauls in an interception in the first half against Bishop McDevitt. (Austin Hertzog – MediaNews Group)

It made for an inauspicious start to the season for Pottstown, which demonstrated a measure of defensive prowess in the early going. The Trojans twice halted McDevitt drives on downs, stopped another with an interception by Jahzeel Watson and recovered a Lancer fumble forced by Nyles Bunn-McNeill on a fourth. They also kept the District 12 entry from driving for a score at the end of the first half, McDevitt getting as far as the Pottstown 35 before time expired.

“We only had three weeks in,” head coach Jeff Delaney noted. “What you saw was the result. We had nothing since July 12.”

One common thread for both teams, though, was the desire to be playing games … even if that opportunity was reduced by decisions to not participate in competition this season due to the COVID-19 pandemic.

Their current products were a result of those delayed starts.

“They (McDevitt) are two weeks ahead of us,” Delaney said. “It was a snowball effect.”

James Bermudez proved to be a steamroller in the Lancers’ running game. The senior running back bulled his way to a 147-yard production and touchdown runs of 20, 13 and six yards.

“We have quite a few running backs, but Bermudez is on a roll,” Watkins said. “We have a lot of talent, so it’s a matter of who gets hot at any time.”
Pottstown immediately answered Bermudez’s first TD at 1:20 in the first quarter with its lone score. Mason Miller, a sophomore making his debut as the Trojans’ quarterback, made a 50-yard throw to Watson to cap an eight-play, 80-yard drive at the 8:30 mark in the second. A missed conversion kick was the difference in the early going.

That proved to be the brightest offensive spot for the Trojans. They did mount a drive deep into McDevitt territory toward game’s end, but a fumble got the Lancers the ball back for a clock-eating series.

“It (season) is going to be a learning experience for us,” Delaney said. “We’ll have our growing pains.”

A particular back-breaker for McDevitt came around the eight-minute mark of the third quarter. Facing a fourth-and-14 from its 34, Pottstown saw a punt attempt swatted down by Johnny Pergine, a transfer from Spring-Ford, who scooped the ball up and sprinted into the end zone for a 21-6 Lancer lead.

“That was huge,” Watkins admitted. “Johnny is a unique player, so it’s not a surprise he did it.”

The visitors went to Nick Santo for their final two scores. The senior, replacing starting QB Jamir Robertson, hooked up with Joachim McElroy on a 12-yard TD toss with 4:39 left in the third quarter. He then ran six yards around his right end at 3:26 to give McDevitt the 35-point lead it needed to bring the “mercy rule” into play.

Pottstown will host fellow Pioneer Athletic Conference entry Boyertown next Friday (Oct. 30) at Grigg Memorial Field. The other games on its abbreviated schedule are both on the road: Bishop Shanahan Friday, Nov. 6, and Phoenixville Friday, Nov. 13.

NOTES >> Miller recovered a McDevitt fumble inside the two-minute mark of the first half. … Pottstown recognized its senior football players and cheerleaders in ceremonies prior to the game. … The Trojans displayed uniforms notable by gray helmets and pants with a combination gray-and-blue stripe.