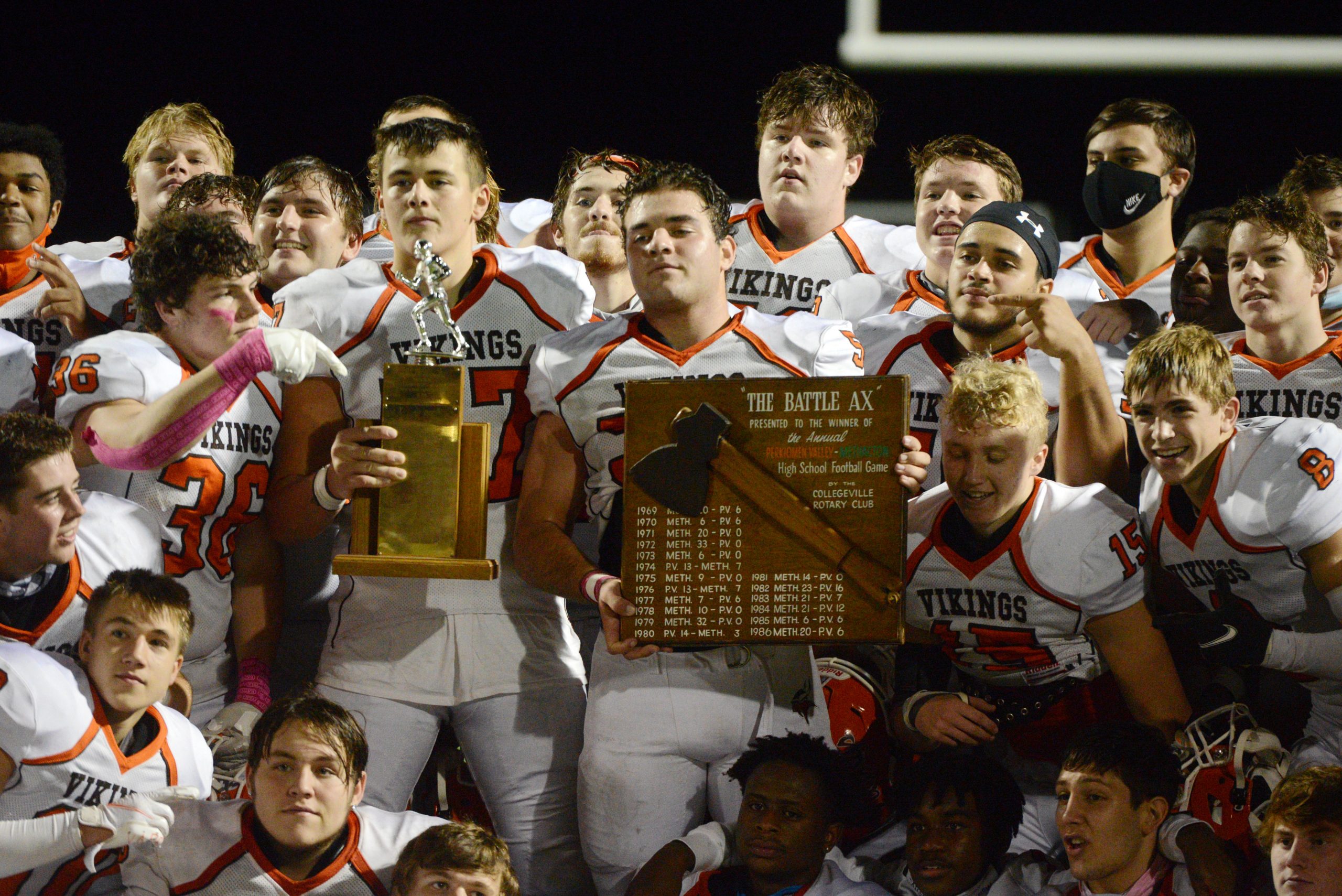 After trailing by a touchdown last week against Boyertown, PV found itself in the same place Friday night against Methacton in the Battle Ax rivalry game.

The Vikings scored touchdowns on all three of their second-half possessions and added a fumble return touchdown by Owens to pull out a 27-14 victory over the Warriors and retain the Battle Ax trophy.

“I think we’re finding ourselves as a second-half team, which is a good thing and a bad thing,” Owens said. “I think when we have our backs against the wall, we’re really stepping up on the defensive side of the ball.”

“We knew we were slacking in the first half, so we knew we had to come out swinging, otherwise the game might not have gone our way,” senior wideout Jason Posner added on the offense’s regroup. Perkiomen Valley’s Aiden Owens, center, is waved on by teammate Jacob Beaudoin, left, as he returns a fumble for a touchdown. (Owen McCue – MediaNews Group)

Perk Valley (4-1) reeled off 20 straight points to start the second half on a 58-yard screen pass from Kohler to Hunsberger, a two-yard touchdown run by Mason Thompson and 60-yard fumble return touchdown by Owens with 1:40 left in third quarter as Methacton was marching down the field to go ahead 20-7.

The Warriors (2-3) pulled back within a score, 20-14, when Mike Merola, who ran in a score to put Methacton ahead in the first half, found Justin Carfrey for a 16-yard touchdown with 7:07 to play and had PV in a 3rd-and-16 at its own 26 on the ensuing possession.

Ethan Kohler to Jason Posner for 38 yards on 3rd-and-16 down to Methacton 33 with about five to play. pic.twitter.com/HDt717RI91

Like they did throughout the night, the Vikings made a play. Senior wideout Posner, who had two catches for 43 yards in the game, caught a pass from Kohler near the first-down mark and took it 38 yards down to the Methacton 33.

PV’s offensive line and tough running from Rasheem Grayson, who led PV with 75 yards rushing on 10 carries, and Thompson (33 yards rushing) helped push the ball and chew the clock before Kohler all but put away the game with a 6-yard touchdown run on third down with 1:34 to go.

“It was a great route concept,” Posner said of the 38-yard catch. “The guy guarding me bit hard on the out, and I just broke it back in. Kohler had time and great protection. He put it where it needed to be, and I made a play. … We’ve been repping these plays all week, and I think we all felt prepared to make a play. I know I did, so we just went out and did it.”

“That’s No. 11 on their team,” Lotier said. “He stepped up and made a play there. It was third-and-long. We called a coverage because we didn’t think they were going to run the ball and their o-line protected and he found the open receiver and that’s why he’s the best quarterback in the conference.

“Our kids fought hard all night. That’s week after week, which I’m proud of, but we need to execute better. Their guy beat our guy on that play, and their kid made a throw and that’s football.” The Warriors’ defense held PV to 0-for-4 on the third downs through the first 30 minutes Friday and made two big fourth down stops in the first half, including keeping the Vikings out of the end end zone on a 4th-and-goal from the 3 just before halftime.

PV was 4-for-4 on third downs in the second half, including Hunsberger’s touchdown catch and Posner’s clutch grab late.

“I think we executed when we needed to tonight,” PV coach Rob Heist said. “This is the best Methacton team I’ve seen on film in some time, and they had a great game plan and they played physical. I think that we knew we were in a dog fight from the beginning, and our kids when our backs were against the wall, they responded positively.

“We have good leadership on this team, and I think they were calm and cool and just knew that this was going to be 48 minutes, and they executed when they needed to.”

Perk Valley 13, Methacton 7 with 4:40 left in Q3 … Mason Thompson punches it in from two-yard line. pic.twitter.com/Zk5V9KXtzz

Execution was also the word used on the other side as the Warriors let an upset bid slip away in the second half for the second week in a row. They were tied 0-0 at halftime with PAC champ Spring-Ford last game before falling 21-0.

Merola completed 5-of-15 passes for 132 yards, including a 45-yard toss to Tom Chapman that helped set up Carfrey’s score and 47-yard pass to Brian Dickey in the final moments as they tried to put together a miracle after Kohler’s score.

He also added 35 yards and a rushing touchdown that gave Methacton a 7-0 lead with 1:14 left in first quarter. Carfrey ran 19 times for 63 yards on the ground.

“Tonight it was a case of execution,” Methacton coach Dave Lotier said. “Great play call by them, but the screen they took 80 yards, it was a blown coverage and then we fumble the ball on the next drive when we’re driving to take back the lead. There’s no more excuses. It was execution. Methacton hast two games left — home against Pottsgrove and on the road against Council Rock South — and still has an opportunity to post a winning record for the first time since 2014.

After opening with a loss to Spring-Ford, PV has won four games in a row. The Vikings finish out with home contests against Pope John Paul II and Daniel Boone before finishing at Quakertown.

“Our team started off the season pretty young and inexperienced,” Posner said. “It took that first game, a little wake up call for us to check in and just start working, pick it up from there.”

Notes >> Owens nearly had a pick six against Upper Perkiomen two weeks ago, but he made what he described as a “non-athletic play” as he stepped out before returning it to the house. He was happy to complete the task this time for his first varsity score. “My first reaction was to lay on it or fall on it to get the easy secure,” Owens said. “But when I saw no one around and my teammates around me, I was just running with my boys and it was a good feeling.”