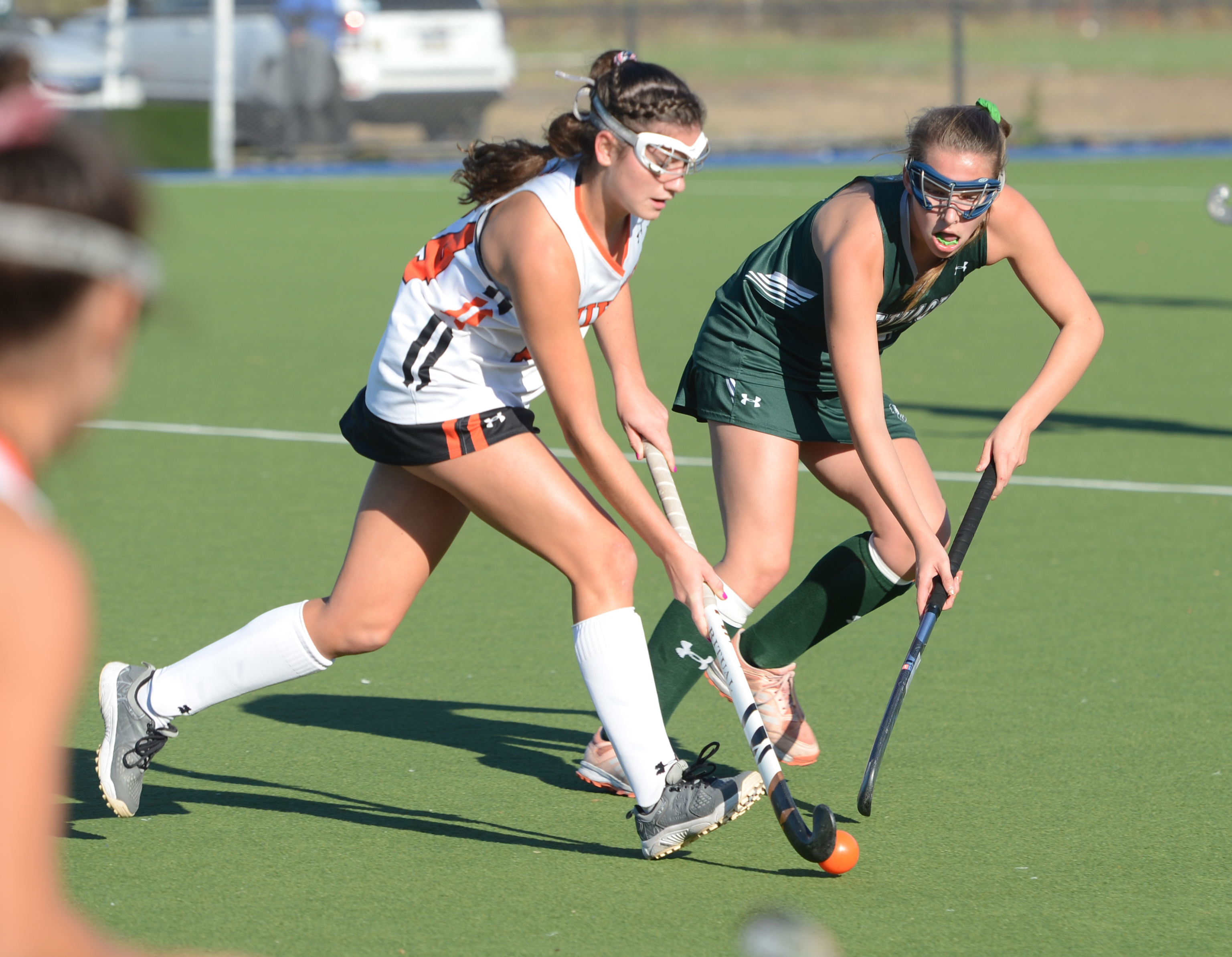 Perk Valley's Cristina Dougherty (24) runs with the ball as Methacton's Elena Snodgrass defends in a past game. Dougherty scored two goals including the OT game-winner in a win over Boyertown Wednesday. (Owen McCue - MediaNews Group)

Perkiomen Valley 2, Boyertown 1 >> Cristina Dougherty’s goals including an overtime game-winner helped the Vikings mark their Senior Night in proper fashion Wednesday, fueling the hosts’ offense in a PAC game with the Bears on the new stadium turf at Perkiomen Valley.

Dougherty, a co-captain and LaSalle University commit, and classmates Anna Dawson and fellow co-captain Saige Shine were key to PV (5-3-1) keeping Boyertown bottled up inside its 50 for the fourth quarter. Lauren Keyte set up Dougherty’s first goal on a corner to level the game 1-1 while she scored the decider at the 12:52 mark in overtime.

Boyertown’s tally was secured by Katelyn Dulin off the assist by Lauren Eaves in the third quarter.

Owen J. Roberts 5, Pottsgrove 0 >> Rylee Laloup figured in on three of the Wildcats’ goals Wednesday, sparking their PAC victory over the Falcons.

Laloup scored twice — assisted once by Payton Hanson — and getting the assist on Emily Himmelreich’s game-capping tally. Ava Clemson and Lilly Gariti did the rest of OJR’s scoring with Raina Smolij getting credit for an assist.

Roberts had big edges on Pottsgrove in shots on goal (26-1) and corners (18-1). Reilley Hagerty and Amy Erb (saves on two shots) combined in goal to produce the clean sheet while Makenzie Johnson had six saves for the Falcons.

Berks Catholic 4, Daniel Boone 0 >> Julia Bressler had a goal and three assists to help the Saints wrap up a Berks League Division II title Wednesday with a win over the Blazers.

Spring-Ford 4, Perkiomen Valley 0 >> Reese Kershner had two goals and an assist, and Hope Flanegin had a goal and an assist. as the Rams rolled the Vikings in Wednesday’s PAC action.

Katie Sites accounted for Spring-Ford’s fourth goal of the night, while Rian Kengor had an assist. Riley Wallace and Erika Eickhoff combined for the clean sheet, Spring-Ford’s seventh of the season.

Nylah Cody had a goal and an assist for Boone, whose other scoring came from Katie Esenwein and Maggie Holloway. Nicole Brown was credited with three assists, and Amy Schafer and Alexandra Woodcock with one apiece, while Jenna Heasley had to make five saves to record the shutout.

Daniel Boone 3, Schuylkill Valley 0 >> The Blazers swept Wednesday’s Berks League match with the Panthers, getting their first victory of the season in 12 outings.