Neshaminy runs away with win over Abington 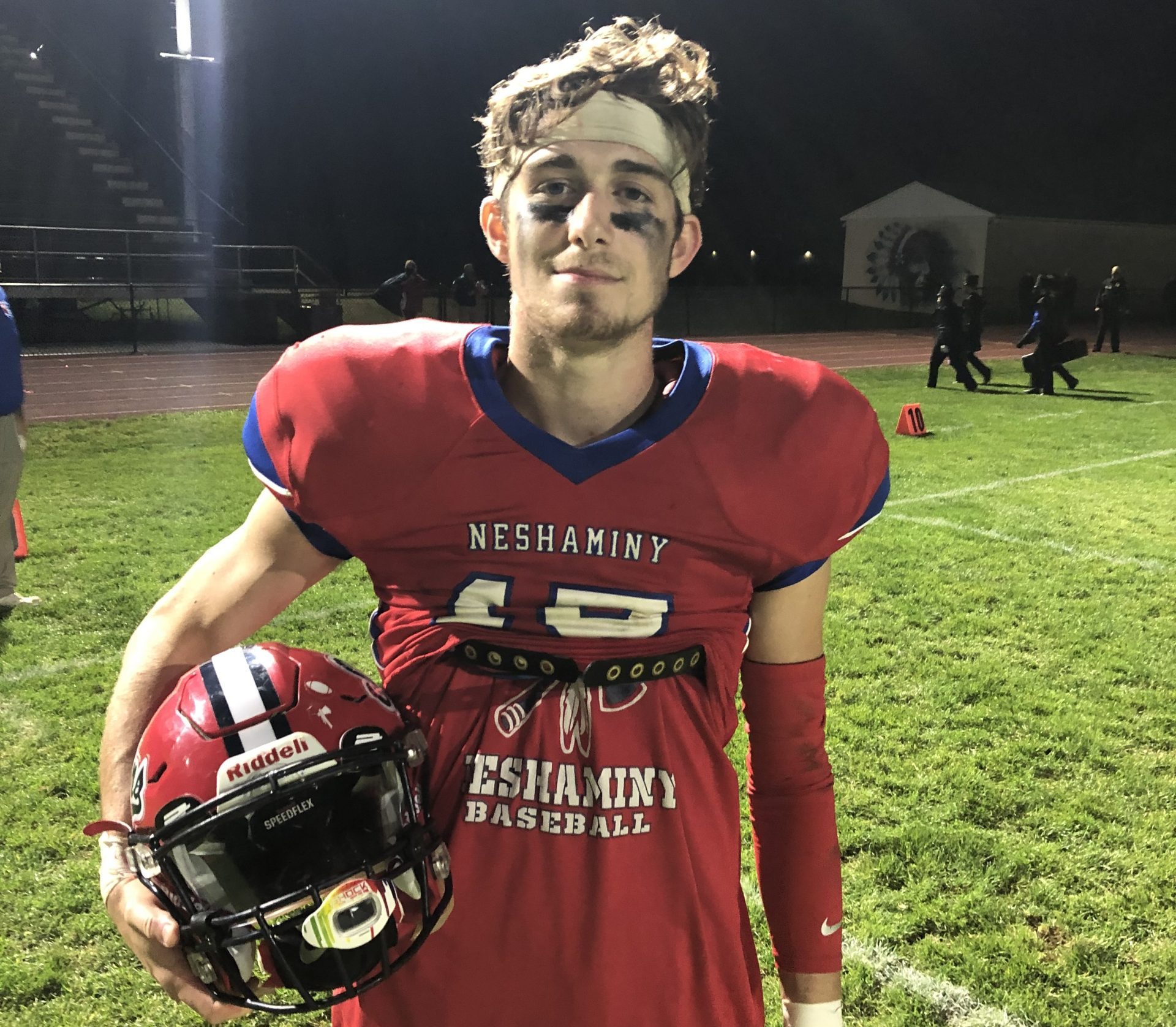 Michael Donato had a touchdown catch and an interception in Nesahminhy's win over Abington on Monday, Oct. 19, 2020. (Andrew Robinson/MediaNews Group)

MIDDLETOWN >> Michael Donato had no idea what was coming.

A slow start and the tough ending to the first half proved too much for Abington, as the Ghosts lost for the first time this season in a 49-28 setback at Neshaminy on Monday night.

“I did not see that coming, no,” Donato said. “I just had to go out there and do my job, that’s really what it came down to.”

A deluge of rain in the area last Friday forced the postponement of the game to Monday night. Playing on the road for the first time this fall, the Ghosts were hoping to avoid the slow start that had hindered them against Central Bucks West.

That wasn’t meant to be. Neshaminy, behind relentless running back Chris James, marched down the field and scored on its first drive with James going in from 14 yards out.

“It’s on me, I didn’t have them ready or prepared,” Abington coach Kevin Conlin said. “I called a bad timeout, we went for it on a fourth down, which was not a great idea.”

While Abington answered right away with a touchdown, it was the exact start Neshaminy needed after being shutout by Pennridge 30-0 in its previous game. Ghosts tailback Oreck Frazier broke off a rampaging 43-yard run to tie the game, capping a 72-yard drive for the offense.

From there, Abington would total just 42 yards of offense the rest of the half despite leading 7-6 after the first quarter. Even two Neshaminy turnovers – a muffed punt recovered by Abington and an interception by the Ghosts’ Khaliq Henry – couldn’t amount to anything on the scoreboard.

“It was huge, obviously we want momentum early in the game,” Donato said. “Chris does a good job of that and it spreads to the whole offense.”

Donato picked off Ghosts quarterback Johnny Dzielawa with 8:06 left in the second quarter and seven plays later, Neshaminy quarterback Nunzio Zydzik powered in on a five-yard keeper to give the hosts the lead for good with 4:23 on the quarter clock.

The Neshaminy defense forced a punt, then the offense went right back down the field. That drive was capped off with a gadget play when receiver Gavin O’Connor rolled right and dropped a 39-yard pass to Donato, who shook free of a defender and scored.

“We worked on it all year but we finally had a chance to pull it out and it worked,” Donato said. “It was awesome.”

Abington mishandled the ensuing kickoff, allowing Neshaminy to recover on the visitors’ 22-yard line with 34.7 on the clock. Four plays later, Zydzik found Donato on a 10-yard pass as Neshaminy took a suddenly commanding 28-7 lead into the half.

The Ghosts came out of the break strong, getting an 89-yard run from Frazier on their second play of the third quarter, forcing a punt and completing another touchdown drive on a tough 24-yard run by Robert Bell. Suddenly, the visitors were within one score.

“I thought we came out and responded really well to a challenge,” Conlin said. “That second quarter was rough especially but we responded. We just can’t come out and make those kind of mistakes, especially against good teams.”

Neshaminy had two things working in its favor as Abington roared out of the second half gate. The first was its three-score advantage which meant the lead was still intact taking over with 3:36 left in the frame and the second was James.

Listed at 5-foot-7 and 160 pounds, the senior back never shied away from running downhill. Taking regular handoffs and plenty of direct snaps in a wildcat formation, James chalked up 215 yards on 30 carries and finally saw some daylight in the second half.

His 59-yard run gave Neshaminy a two-score lead at the end of the third and he added scores on 13-yard and 33-yard runs in the fourth to total up a four-score evening.

“We went out with energy and everybody did their job, that was the goal tonight,” Donato said. “Chris gets a ton of carries every game but when we connect in the passing game, it opens up room and only makes him better.”

Despite getting a late touchdown on a 36-yard pass from Dzielawa to Henry, the Ghosts couldn’t stop James and faced a three-score deficit throughout the fourth quarter. Abington does not have much time to regroup, as Pennsbury visits on Friday for Senior Night.