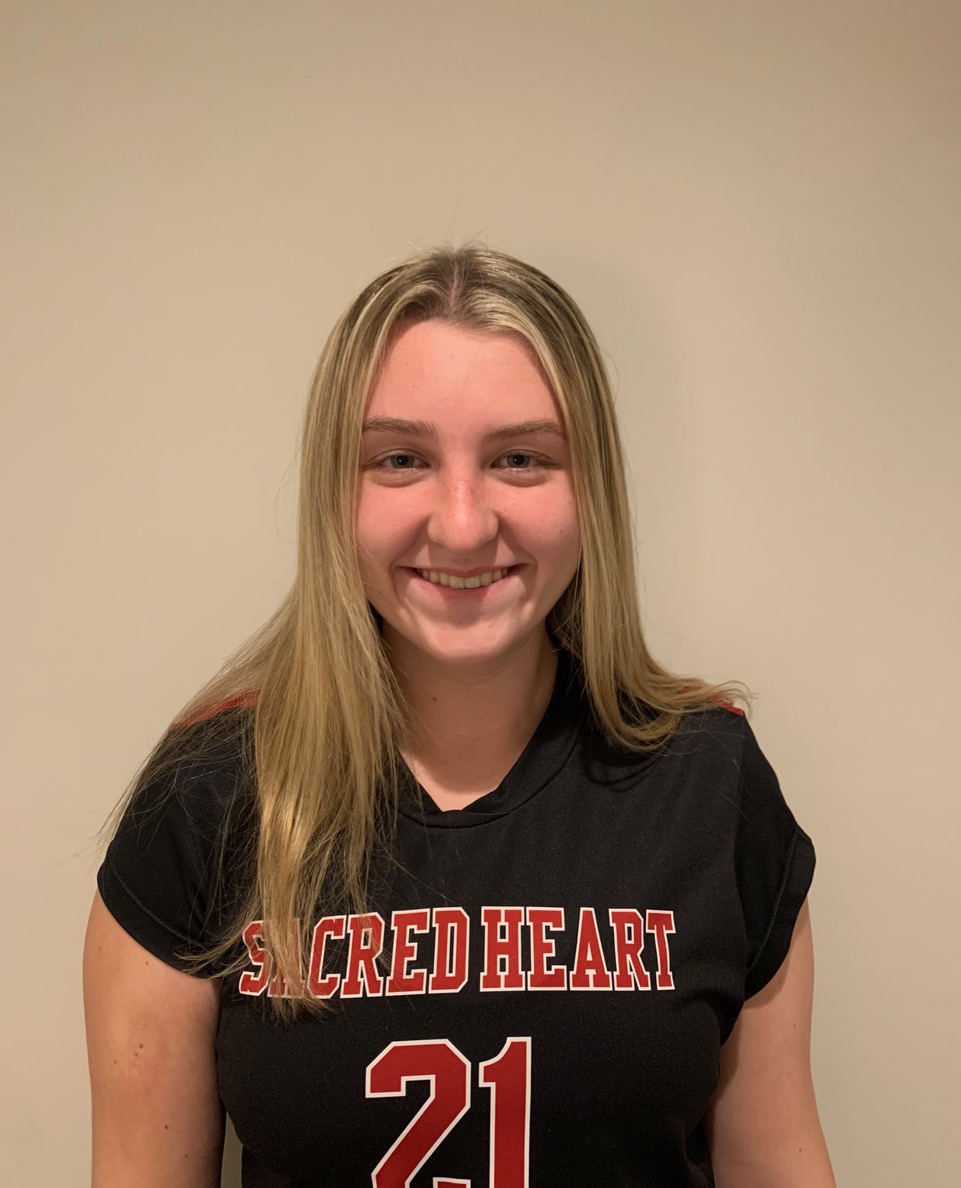 A senior outside hitter and second-year captain, Erin Corcoran is third all-time at Sacred Heart for kills, set the school’s single-season record for aces last fall, and was named to the Pennsylvania Volleyball Coaches Association all-state team last year. She also received second team All-Main Line girls’ volleyball honors, as the Lions captured their third consecutive District 1 title. Off the court, Corcoran is a member of several clubs at Sacred Heart and serves as the SHA Newspaper editor, Community Service Corps president, and as a Kairos retreat leader.

A: I would say the strongest part of my game right now is hitting, although there’s always room for improvement. Hitting down the line is probably my favorite skill. Currently I’m working the most on my defense and serve receive. When I first began playing, I was taught “defense first,” and that has really stuck with me, so I’m trying to put those words into action right now.

Q: As a second-year captain, how do you view your leadership role on the team, particularly in light of the COVID-19 pandemic and related safety protocols?

A: I think my leadership role as captain is important. I’ve played under a number of great captains at Sacred Heart, as well as on club teams, and they’ve been important in holding teams together. I have a great co-captain, Bella O’Toole, who helps me encourage our teammates and remind them of their value to this team. Confidence is very important, especially in a young team like ours, so I feel that it’s our job to help encourage the players. We also try to be role models in terms of COVID-19 related safety procedures. We ask everyone to be careful and social distance in order to keep our season intact, and we do the same. We encourage everyone to wear their masks and follow the procedures at each school we visit for matches. We make sure everyone respects the other schools’ rules and the guidelines they follow.

Q: Sacred Heart has won the district title each of the last three years. What is your fondest memory of the post-season – can you share it with us?

A: My fondest post-season memory has to be last season’s District One championship final, against Plumstead Christian. We lost the first two sets, but we were able to come back to win the next three sets. It’s a great memory because it reminds me of how special my team is and how great the girls are. The fact that we were able to come together to win the game after losing the first two sets always makes me so thankful to be part of such an incredible team who never gave up and never stopped fighting. It was the most exciting game I’ve ever played. I also reached 500 career kills during that game, which was very special for me.

Q: Tell us a little about your volleyball training since the start of the COVID-19 pandemic. What have you found to be the biggest challenge to your training during the pandemic, and how did you handle that?

A: Volleyball is a team sport, so when COVID-19 started it was really hard for us to play. You can always practice skills at home, of course, but what I could do without a court and a team was limited. I’m lucky enough to have my little sister, Annie who plays, (and is also my setter!) so we played outside almost every day during the lockdown. However, when I wasn’t practicing with my team, a net, or a court, I didn’t feel like I was improving much. The biggest challenge to training during COVID was simply the fact that I couldn’t get into a gym with my team for so long. I handled that issue by working on what I could at home, and got back into the gym with the team as soon as I could over the summer.

Q: Have you always played outside hitter? What sparked your original interest in volleyball?

A: I haven’t always been an outside hitter, although I love the position. I actually started as a middle and I was a right-side hitter for Sacred Heart my freshman year. The last two years, I also played up an age group in club, so I was a right-side hitter on that team. My older sister, Kerri, actually sparked my original interest in volleyball. She played for Sacred Heart years ago, and I loved watching her play, and I wanted to play on a team like hers.

Q: Who have been your biggest volleyball mentors, and what was the most important thing you learned from each one?

A: My biggest volleyball mentors would definitely have to be my Our Lady of Perpetual Help CYO coaches from my middle school years, Mrs. Boylan and Mrs. Hamilton. I really disliked volleyball before they coached me, but they were so encouraging. They coached every play, spoke to us after every mistake, and were so patient. I learned so much from them about the sport, as well how to be a coachable player and good teammate. I truly believe that having such great coaches at such a young age allowed me to love the sport as I do now.

A: I love game day! The most important thing I do for pre-game is team lunch. This year, my team and I decided to have team lunch at school before every game. It’s a great way for us to bond, and it’s a really nice to prepare for a game. We talk about the teams we’re playing, what we can do better for an upcoming match, or just regular everyday stuff. When it gets closer to game time, we put on music, think about the game, and hype each other up.

Q: What do you think you’d like to major in at college?

A: I’m really interested in pursuing a degree in nursing.

Favorite book: Everything I Never Told You, by Celeste Ng.

Person I most admire, and why: “My grandfather. He carries himself in a way that I aspire to carry myself. He is my biggest supporter, and he supports my cousins and siblings in the same way. He is always there for me, and I aspire to live as he does.”