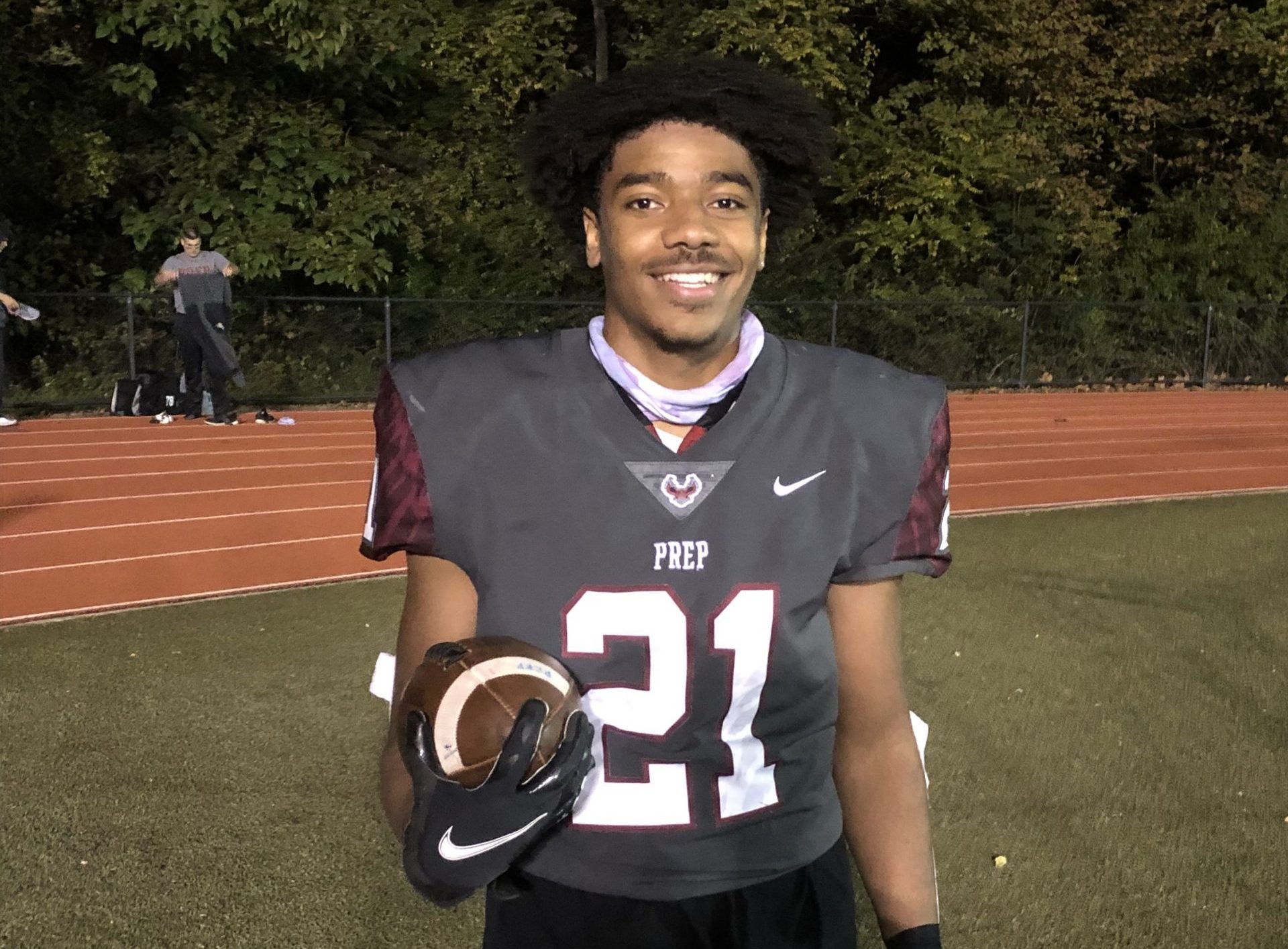 Cradling the game ball he had just been given by coach Tim Roken, the senior running back enjoyed the moment as his team celebrated around him in the same spot he had scored three first half touchdowns. House, a Lansdale resident, arrived at the Prep as a running back, moved to receiver and was pushed back into his old position just in time for the team’s PCL opener against fierce rival La Salle.

House’s trio of scores helped power a dominant first half as the Hawks topped the Explorers 38-14 at Cardinal O’Hara on Saturday night.

“In previous years, it was definitely frustrating but I just waited for my shot,” House said. “I knew my time was coming and I was always working so it feels great to finally have a game like this.”

House scored touchdowns on the first two Prep drives of the game and got his hat trick on the team’s fourth offensive possession, putting the Hawks up 24-0. Interestingly, all three of his scores were one-yard runs out of the team’s goal-line package with Jeremiah Trotter Jr and Josiah Trotter – the sons of former Eagles linebacker Jeremiah Trotter – leading the way as blocking backs.

The Prep’s (2-0) starting back, Josh Barlow, was injured in the team’s season-opening win last week, giving House his opportunity to shine. The senior, who got his start in football with the Lansdale Cannoneers and played at Penndale Middle School before the Prep, said he’d gotten some work at running back before the season but rotated back to the position full time leading up to Saturday.

“I’ve watched the guys who have come through here and graduated and they led the way,” House said. “Waiting my turn, the coaches have my back and they’ve been training me for it since day one.”

Prep quarterback Kyle McCord said seeing House get the game ball and having the team mob him was a great way to end the night. The Ohio State recruit had an outstanding game of his own, but said House has had a lot asked of him by the coaching staff and the back has done it without complaint.

“Noble’s been playing slot receiver and running back, so he knows the offense extremely well because he has to while playing two positions,” McCord said. “He showed why he’s one of the most underrated players in the state and he’s certainly capitalized on his opportunities.

“We see how hard he works during the week and how he prepares so to see the success he has, it sometimes goes unappreciated. Tonight, I was glad to see him score three times and get the game ball, it was a pretty special moment.”

House said former Hawks coach Gabe Infante was the one who drew him to the Prep and the senior said he’s learned quite a bit in his time there. Competing with Barlow for reps didn’t get the two off to the best of starts, but once House switched to receiver, he’s counted Barlow as one of his closest friends.

Saturday, Blaine Bush got a good share of carries too and House said he’s tried to be a mentor for the junior tailback and not let any battle for playing time get between them.

“I didn’t want to have that type of confrontational competition where one person wins and one person loses,” House said. “I’ve tried to teach him everything I’ve learned so we both see it as winning. I don’t want to be fighting for a position when we can help each other.”

House is hoping to latch on with a college program and is eager to show the Prep coaching staff he can handle a bigger load as running back and not just be a short-yardage and goal line runner. Saturday, he was just happy to see the fruits of his labor pay off in an important game.

FOR ‘ZAY >> On La Salle’s (3-1) first possession of the game, all 22 players on the field took a knee for the entirety of the playclock as a tribute to Explorers senior Isaiah Turner, a senior offensive lineman who passed away on Sept. 4 after collapsing following a team practice. While a penalty was called, the Prep declined it.

Turner, who was expected to start at left guard, is remembered as a gentle giant as well as a beloved teammates and student at La Salle. In the days following his passing, the Prep captains and Roken welcomed La Salle coach John Steinmetz and the Explorers captains for Mass in a display of unity and celebration of Turner’s life.

QUICK START >> After driving down the field and scoring on the game’s first drive, the Hawks got another prime opportunity and took advantage.

The Prep’s defensive line caused havoc all through the first half, specifically from the duo of Nick Yagodich and Daniel Daly. A fumbled snap on La Salle’s opening drive led to Daly recovering on the Explorer’s four yard line with House punching it in for a 14-0 lead soon after.

“That’s huge, offensively we did what we needed to do and our defense backed it up with a big play,” McCord said. “They gave us the ball in great field position and we capitalized. That’s what it’s all about, the defense making big plays for the offense and the offense going out and capitalizing.”

McCord showed why he was one of the top quarterback prospects in the Class of 2021, going 11-of-17 for 227 yards and a touchdown in the first half, which closed with the Hawks up 38-0. He opened the first drive 3-of-3 for 56 yards, including a pair of completions to senior Marvin Harrison Jr, his future Ohio State teammate.

Harrison Jr left the game after he was sandwiched between a pair of defenders trying to make a catch in the end zone on the Prep’s fourth drive and did not return, although he was able to walk off on his own and got treatment from the team’s training staff.

Even with their top receiver out, the Hawks gashed La Salle’s defense through the air, with Malik Cooper hauling in a perfectly thrown 56-yard TD pass from McCord that made it 31-0.

“It shows how deep we are, really,” McCord said. “No matter the position, guys are preparing like they’re going to play and they showed they’re game ready. Obviously, Marvin is a threat offensively, I don’t even have to get into how good he is but losing him for a lot of teams would destruct the offense and for us, it was the next guy up making plays.”

Despite the best efforts of the La Salle defense, the Explorers just couldn’t find a way to slow down the Prep’s potent offense.

“It starts with the quarterback, he’s really good and they definitely have some good wide receivers too,” La Salle linebacker Chris Thompson said. “We have to come back and play better as a team.”

Both Thompson and defensive end Paul Jennings felt their team played hard to the last snap, but still needed to play even harder. The Explorers’ next scheduled game is against Roman Catholic on Oct. 31 with a game against Archbishop Wood slated for Nov. 7.

“We know what kind of team we are and what we can do,” Jennings, a co-captain, said. “Not the outcome we were looking for but we continued to play hard. This is as good as they get, we have to use the lessons from this game in the coming weeks because we’ve got some big matchups.”

“The lesson is you have to keep working,” Thompson said. “We didn’t give up, that’s the best thing you can do. But we have to work harder, clearly.”

La Salle scored a pair of fourth quarter touchdowns, with quarterback Gavin Daly taking the first himself on a keeper, then throwing a TD to Nole Henry in the final minute.