Upper Perkiomen gets into win column with 31-14 handling of Owen J. Roberts 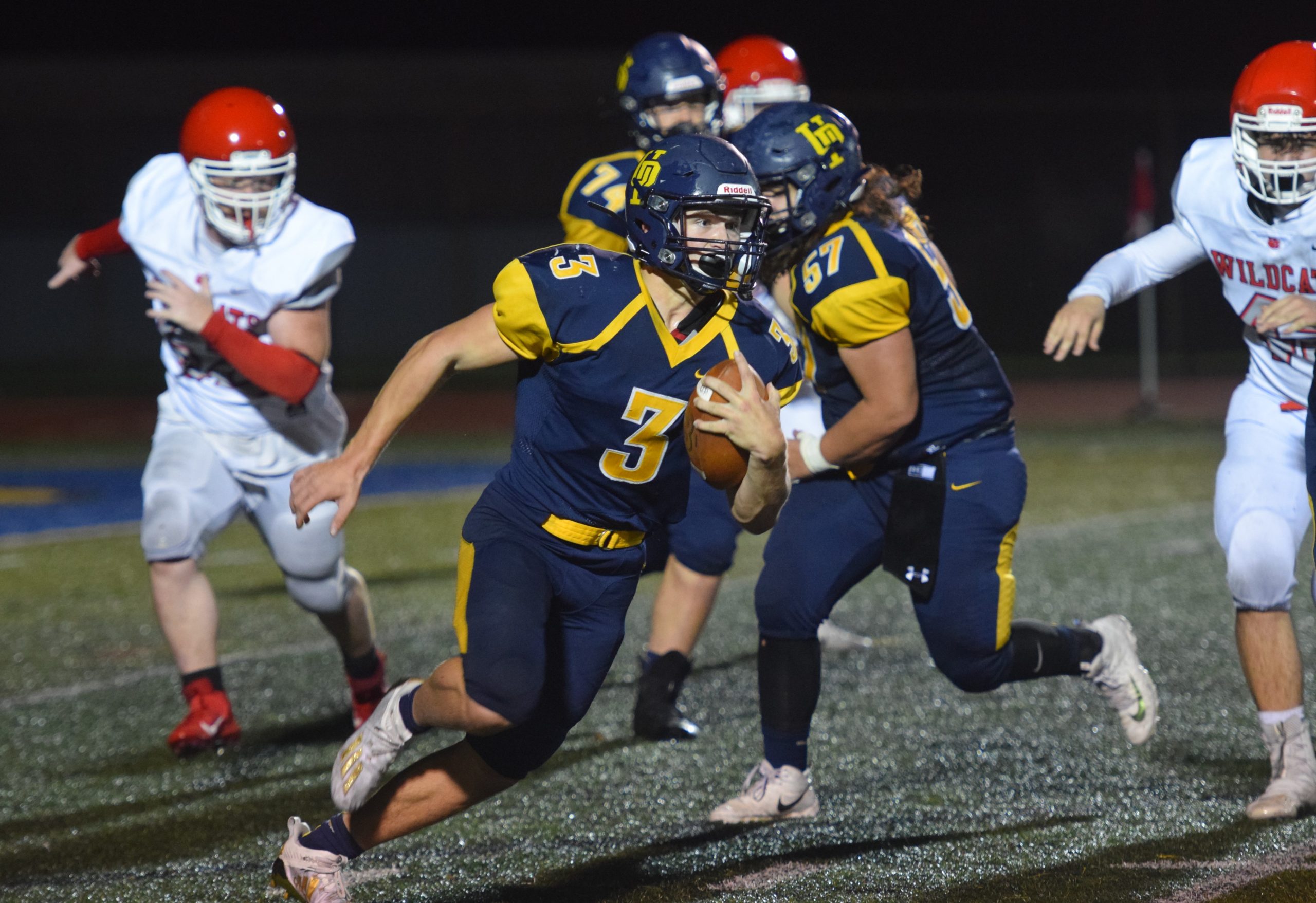 “It’s like when you have a donut on your bat,” he said, a reference to the Indians’ previous games with Pioneer Athletic Conference powers Perkiomen Valley and Spring-Ford. “We got the donut off the bat tonight.”

After losing to the Vikings and Rams by a combined 89-0, Upper Perk was ready to show its stuff against the Wildcats. It did so, ringing up a 31-14 victory to which its contributions spanned all aspects of the sport — and numerous players wearing blue and gold.

Unsurprising highlights included Logan Simmon running for 222 yards and two touchdowns while quarterback Hunter Flack threw for 168 yards and two TDs. There was also a defense that kept Owen J. from adding to its point production over the final 32½ minutes — the biggest effort stopping the ‘Cats with a goal line stand at the 1-yard line in the fourth quarter — and Flack kicking an estimated-record 45-yard field goal that was all the scoring in the second half.

It all added up to Upper Perk’s first victory in four games thus far … and a poised performance against a Owen J. Roberts squad (2-2) knocked out of a three-way tie for second place behind unbeaten Spring-Ford.

“We got through the gauntlet with Perk Valley and Spring-Ford,” Hontz said. “This was huge.”

Simmon finished the night with three touchdowns, a 27-yard pass collaboration with Flack coming after he rolled 85 yards for one score and bulled four yards for another in the first quarter. He was effusive in his praise of the teammates who cleared out the lanes for him to rack up his big yardage on just 17 totes.

“The line play was unbelievable,” the UP junior said. “I could have driven through those holes with a truck. The wide receivers were getting the edge and making great catches.”

The O-line was also key to Flack going 9-for-15 in the passing game for 168 yards. His main target was Corey Jackson, whose four-catch, 61-yard outing was headed by a 20-yard TD snare inside the first two minutes of the second quarter.

“Everyone stepped up and made big plays,” Flack said. “On the jump balls, we had the confidence to make big plays.”

UP’s line play also received credit from OJR head coach Rich Kolka. Even while Roberts had its own triple-digit runner in Avrey Grimm (130 yards on 27 carries), it couldn’t overcome the UP defense on a fourth-quarter drive that saw Grimm stacked up on a fourth-and-goal at the Tribe’s one-yard line, with Owen J. behind 28-14 but a good chunk of time left.

“They killed us up front, their defensive and offensive lines,” he said. “Not scoring from the one-yard line hurt.”

Roberts’ passing game chalked up more than 200 yards on the night. Quarterback Mike Reed, a sophomore in the fray with senior Matthew Cutrone injured since the second game of the season, combined with Dante DeNardo on 13 of his 18 completions and for 147 of the Wildcats’ 211 yards. They teamed up for a 16-yard scoring toss in the first quarter, Roberts’ other points coming off Reed’s 56-yard bomb to Grimm (three catches, 66 yards) in the second.

“He’s one of the better wideouts in the league,” Kolka said of DeNardo. “But we couldn’t match scores with them.”

On the defensive side, Brady Thompson and Damon Faraco were getting their numbers called frequently during the night for the Tribe. Faraco complemented a sack of Reed with drops of him and Grimm on Roberts’ offensive series spanning the third and fourth quarters.

But on the crucial fourth-down run by Grimm, the center of the Indians’ D-line rose up to keep Owen J. out of the end zone to halt a six-play drive that saw OJR get the ball on the UP 18 after a high snap on a UP punt attempt and Grimm making a 31-yard return to the 18.

Buoyed by the stop, Upper Perk drove 80 yards on 11 plays. Facing a fourth-and-nine at the OJR 27, Flack was called on to attempt a 45-yard field goal … which he made, though even he admitted he wasn’t sure it was good.

“I didn’t think I had the leg,” Flack said of the third field goal he tried this season. “I thought it was short, but I was hoping.”

Getting the ball one more time, Owen J. got it to the UP 26. But that drive died with 29 seconds left on the clock, Thompson intercepting Reed to seal the affair.

“We played as a team,” Simmon said. “We finally figured it out. It feels good to win.

NOTES >> Upper Perk had 418 yards total offense to OJR’s 316. … All of Flack’s aerial hookups were for 10 or more yards. He completed five passes to start the game before his first miss. … Seven of Reed’s completions were for double-digit yardage.