Upper Moreland puts the rush on against Springfield-Montco 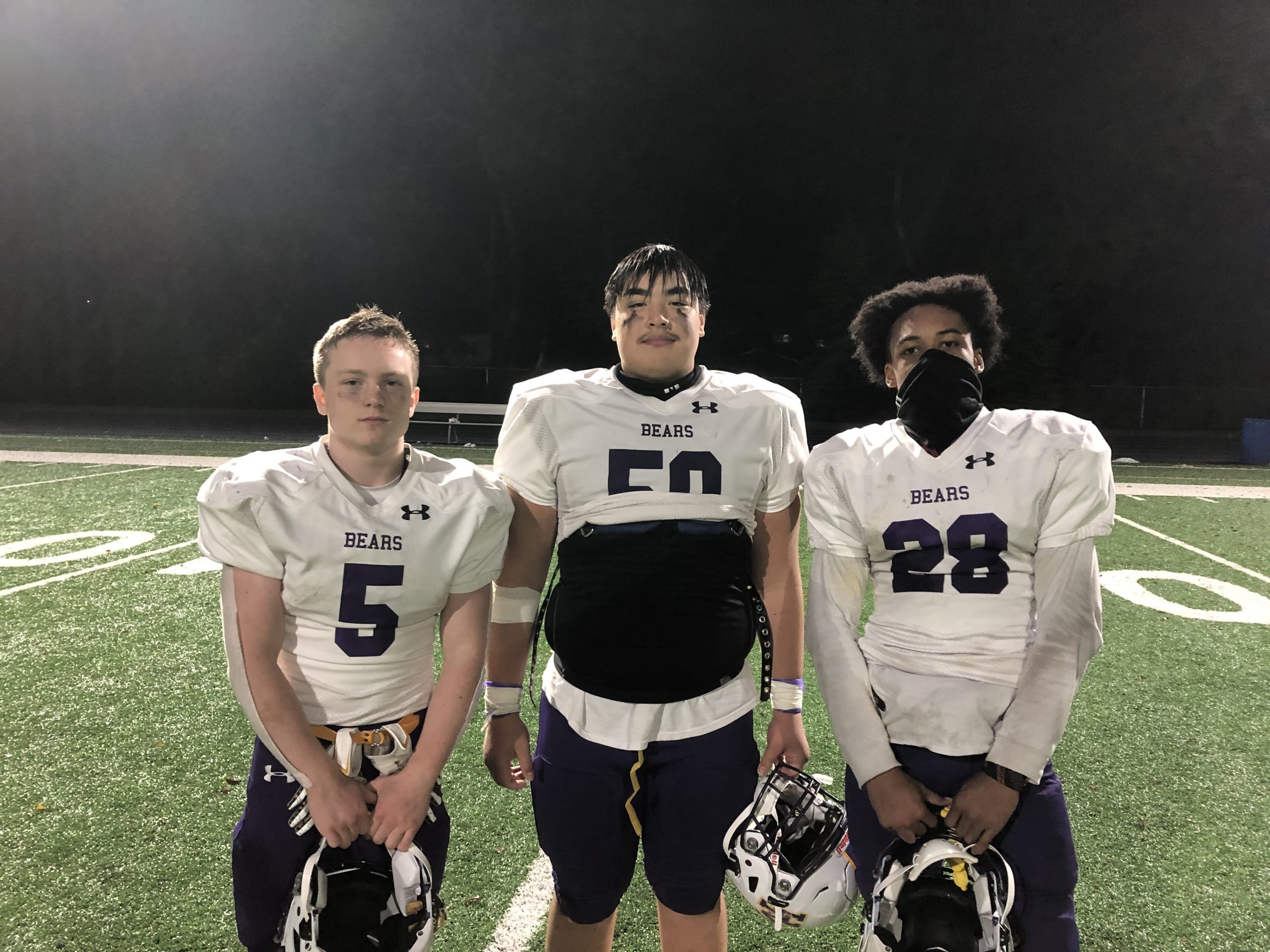 SPRINGFIELD >> The Upper Moreland ground game was going to find out how good it really was.

Senior Anthony Broderick, part of the Golden Bears’ cadre of backs, had been surprised how well his team had run the ball to start the season. Down two starting linemen against a Springfield-Montco squad that always plays hard and looking to rebound from a loss, the Bears rushers had a challenge.

The rushing attack made its statement on Friday, totaling 400 yards on the ground as UM scored 20 unanswered points to top the Spartans 47-28.

“We just keep playing hard,” UM tailback Cameryn Jackson said. “Tonight we played against adversity, we were down a couple players, but we played hard and played as a team. That’s how you come back after you go down.”

Jackson put on a masterful performance running the ball, picking 223 yards on 19 carries with a nine-yard score icing the game in the final minutes of the fourth quarter. Seven of his carries went for 10 or more yards, including a game-best 48 yarder and a 46-yard dash that helped set-up the go-ahead touchdown.

Looking at the stats, it may be tough to believe the Bears were down two starting lineman but that was the case. Both starting guards were out injured, so sophomore Chase Ragan and junior Lucas Villanueva stepped up to fill in around center Dan Goldstein and tackles Joe Marczak and Ryan Schernecke.

“Our o-line played a great game tonight, especially with some young guys stepping up,” Broderick said. “They all stepped up and did their job making some huge holes for the running backs.”

After the Spartans scored on the first drive of the game, the teams traded punts before UM got on the board. A Jackson 17-yard run and a Broderick 20-yard rush set up Byron Hopkins’ 23-yard pass to a wide-open Broderick in the end zone.

Broderick scored on a 29-yard run the next offensive possession to give UM its first lead and Hopkins would get in on a four-yard keeper to make it 21-7 Bears late in the second quarter.

Six different players got a carry for Upper Moreland, with Broderick totaling 88 yards on the ground and Hopkins running for 35 to spell Jackson’s big night.

“They’re going to put their foot in the ground and just cut up field,” Villanueva said. “They’re special.”

“They played hard the whole time,” Jackson said of his line. “When you slack off, even one time, that’s when the running game stops working but they kept pushing, getting to the second level and doing their job. They made me excel through the whole game.”

Springfield had a momentous end to the half, scoring a late TD then getting a pick from John Adams to deny UM an answer. To start the second half, the Spartans surprised the Bears with an onside kick and recovered thanks to captain Luke Gozzard.

The Spartans would then tie the game and later took a 28-27 lead with 3:49 left in the third quarter.

“We had to get our heads straight and get back in the game,” Broderick said. “We couldn’t pout about it, we had to pick our heads up, fight hard and get back to it. Our momentum came back when we started scoring and getting defensive stops.”

While the Bears have a good passing game, and it was effective on Friday, they were gaining plenty on the ground and there was no reason to go away from it. Jackson’s 46-yard run kicked off a drive that ended with big back Hassan Johnson rumbling in from 16 yards out for the go-ahead score and a 33-16 lead after a failed two-point try.

After the defense got a stop in the red zone, Jackson tore off his 48-yard run the next play and Broderick capped that quick, three-play drive with a 25-yard TD run. With each consecutive stop by the defense, the offense just kept running the ball and Villanueva felt the Bears were able to start wearing Springfield down as they regained control of the contest.

“It was important to keep our legs moving and just keep running it at their defense,” Villanueva said. “We were prepared for their defense so I thought we came out did well. We used the momentum our defense gave us.”

Jackson and Broderick said they have a lot of trust in the depth the Bears have and felt Friday’s effort showed it with the way the line blocked. Villanueva said no matter who is in, the team works hard at practice and it was up to the new starters to prove they belonged.

“We’ve got talent on first string, second string, third string, anywhere we put somebody, we have talent there,” Jackson said. “That’s what makes us Upper Moreland.”

Spartans coach Chris Shelly knows his team would have greatly benefited from a normal offseason, training camp and scrimmage schedule but he also knows every team is dealing with the same setbacks thanks to COVID-19.

So while the Spartans may be young, they know it’s not an excuse they can fall on with each opponent having navigated the same path over the past seven months. What can make up for it is effort, and that’s something Springfield Township will bring in droves.

“We gave (Upper Moreland) everything they could handle, that’s what we do,” Shelly said. “They have to learn, they’re going to take their lumps and (UM) is a good team, so we saw we have to get better.”

The coach didn’t hesitate to be aggressive on the field when he was able. Sensing his team had the momentum going into the half after scoring and getting the Adams interception to end the second quarter, Shelly went for a big play with the onside kick.

“We were coming out there guns blazing,” Shelly said. “We had a lot of stuff we wanted us so we were out there in attack mode. They have a good team, so that was huge. Luke Gozzard got it, he’s one of our captains, and we’re right back in it.”

Shelly agreed the UM ground game did have his defense worn down by the fourth quarter but he also pointed to a missed opportunity where the Spartans got the ball inside the 20 and didn’t score during the fourth quarter as key moment.

Spartans quarterback Gabe Franczyk battled, throwing for 171 yards and three scores while rushing for another. While the scoreboard didn’t go in their favor, there was plenty to take from the effort with two weeks left in the regular season.

“I told our guys, I’m proud of them,” Shelly said. “I love our kids, they fight like warriors and as long as they don’t beat themselves up too much, we’re going to get stronger from this.”