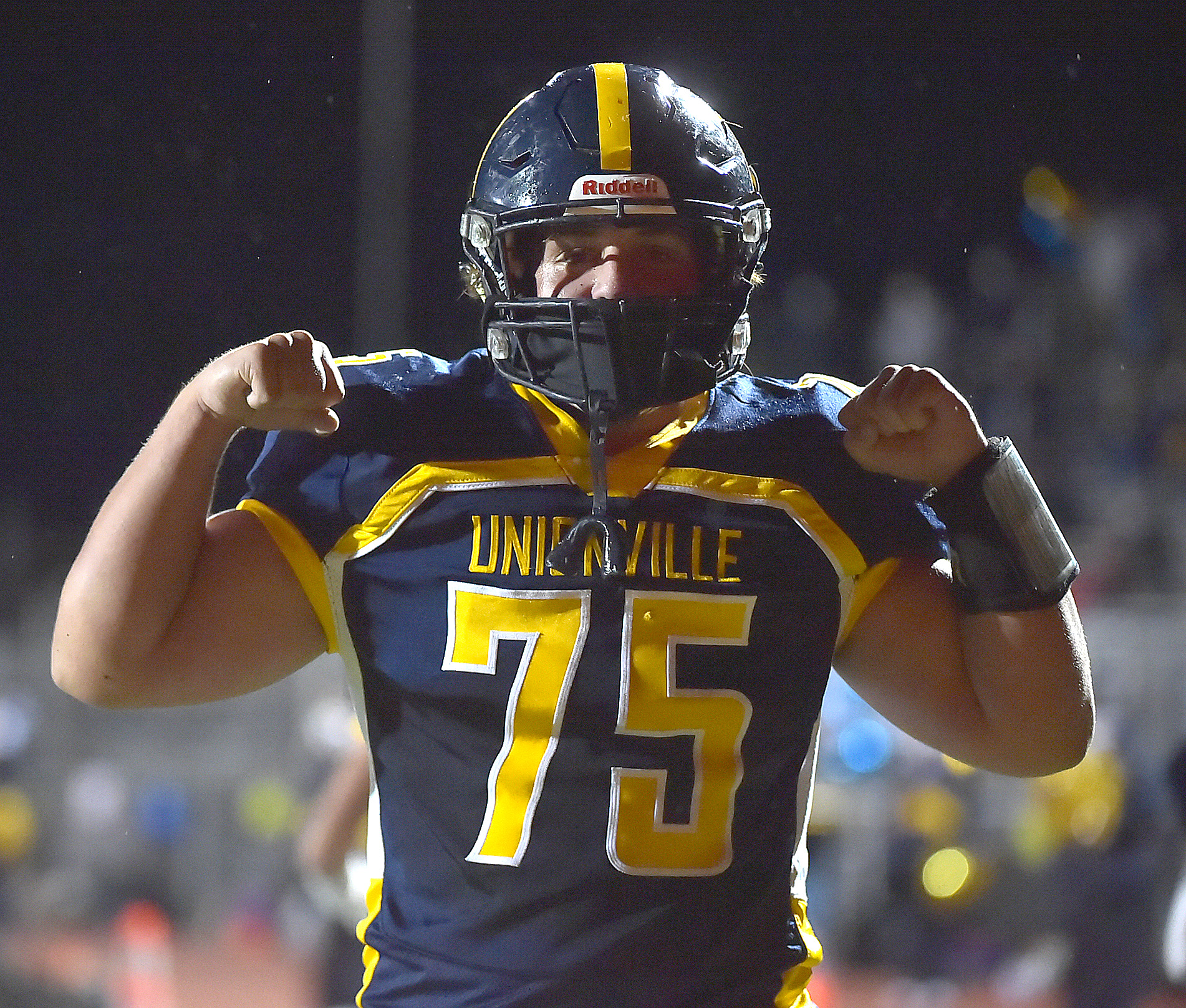 Unionville running back Ethan Bennink breaks free for a touchdown in the third quarter. Grim had two touchdowns in the quarter. (PETE BANNAN – MNG)

Unionville’s running game began to take control near the end of the first quarter. A blocked punt gave Unionville the ball at midfield, then three plays later the hosts faced a crucial 4th-and-1 from the Henderson 39 yard line. Bennink took the ball, and broke free for a 15-yard gain and a first down. Four plays later, Bennink ran through a good-sized hole on the left side for a 15-yard touchdown.

Following a three-and-out by the Warriors, Unionville put together a 10-play, 52-yard touchdown drive (eight of the plays were runs), capped by a three-yard plunge into the end zone by Grim to make the score 13-0.

Unionville forced the Warriors into a couple more three-and-outs before the end of the first half. The hosts led at halftime, 13-0, and Clark particularly noted the defensive contributions of senior defensive linemen Justin McMahon and Sam Shearer, senior linebacker Sean Kelly and junior LB Nate Holt.

“We were really worried about their quarterback [Henderson’s Eddie Smink] throwing the ball vertically – he was really impressive against Kennett last week,” said Clark. “But everybody did their job on defense tonight against the pass game. … We were playing fast on defense today.”

Unionville received the second half kickoff, and senior Anthony Borrelli broke free for a long return to the Henderson 37. On the next play, Grim rolled to the left for a 17-yard gain; then on the following play went left again for a 20-yard touchdown run to give the hosts a 20-0 lead.

“Anthony is a track kid, a sprinter, he got moving straight ahead, it was a great return that set us up [in good position],” said Clark. “Weston’s been our guy, for three years he’s been a starter – before this year, he had to split carries with Connor Schilling, but Weston’s the same [type of] guy, he’s a really good player for us.”

Last week, Unionville gave up three TDs on kickoff returns in its 35-27 win against West Chester Rustin, but on Friday evening, the hosts kept making short, high kickoffs that were not returned by Henderson for long gains.

With a 20-0 lead, Unionville had Henderson pinned back on its own 30 yard line on 3rd-and-10, but Warrior senior Andrew Dermond got open deep down the right sideline, and Smink delivered the ball perfectly to him for a 65-yard gain to the Unionville 5 yard line.

Unionville runningback Wes Grim dives for a touchdown on the first drive in the third quarter. Grim had two touchdowns in the quarter. (PETE BANNAN – MNG)

Three plays later, Dermond made a great leaping catch in the back right corner of the end zone for a 5-yard TD that cut Unionville’s lead to 20-6.

The hosts came right back for a five-play, 71-yard touchdown drive of their own. After the hosts returned the kickoff to the Unionville 29 , Bennink ran for 11 yards, then junior quarterback Matt McCloskey hit Holt for a 15 yard gain.

On 2nd-and-8 from the Henderson 43, Bennink carried the ball to the right, then quickly reversed his course and outran a couple of defenders down the left sideline all the way into the end zone. Brian Dym’s extra point made it 27-6 with 7:04 to go in the third quarter.

Smink had been injured on the Warriors’ earlier touchdown play, and with the visitors’ junior quarterback sidelined, a three-and-out by Henderson and a 26-yard punt gave the hosts the ball at their own 44 yard line.

Unionville proceeded to put together a nine-play, 56-yard touchdown drive that consisted mostly of runs to the inside by Bennink and Grim. When Grim rolled into the end zone from 8 yards out, there were only 9.6 seconds left in the third quarter.

Henderson wuarterback Eddie Smink connected on a touchdown to (11) Andrew Dermond in the third quarter but was hurt on the play and out the rest of the game. (PETE BANNAN – MNG)

Henderson had another 3-and-out, and a Warrior punt was blocked by Grim and recovered by Kelly, who ran into the end zone to give Unionville a 41-6 lead with 11:15 left.

The Warriors then put together a sustained touchdown drive of 78 yards in nine plays, most of them runs by senior Thomas Washington. On the eighth play of the drive, the 5-foot-9, 155-pound senior broke free for a 38-yard run to the Unionville 8 yard line. His 8-yard touchdown run came with 6:06 to play.

“We’re a young team, and it’s taken us a while to get our focus,” said Clark, whose squad improved to 2-0. “We’ve waited a long time to play [football] – we’re thankful to have a fall to play football in.”

Henderson head coach John Lunardi said, “I think the majority of the game we played better than the scoreboard showed. Unionville is a solid team. … Our players have to stay invested, and be happy with every opportunity we have to play football this fall.”