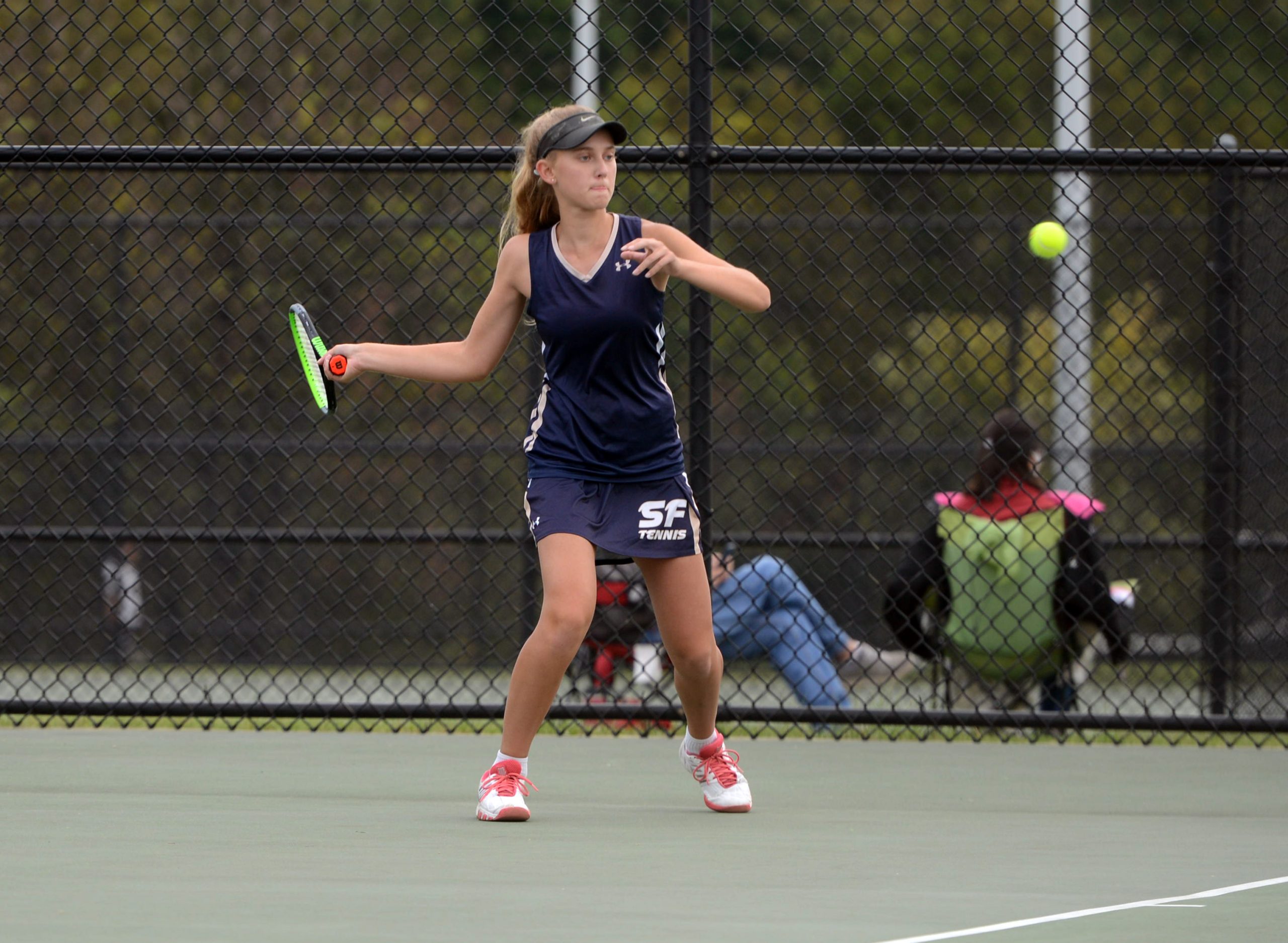 Spring-Ford’s girls tennis team made a little bit of history on its home courts Saturday.

The No. 4 seed Rams earned a 3-2 victory over No. 5 seed West Chester Henderson in the first round of the District 1 team tournament. It was the first district team win in program history.

Freshman Mia Matriccino won in first singles (6-1, 6-1); Cady Krause picked up another point for the Rams in third singles (6-0, 6-1); and the second doubles team of Alexis Luo and Evelyn Mejia defeated Henderson’s Grace Sweeney and Morgan Selgrade 6-0, 6-1 to clinch the match.

Spring-Ford will travel to face top-seeded Unionville on Monday at 2:30 p.m. in a semifinal match.

Daniel Boone 8, Hamburg 0 >> The Blazers had a pair of hat tricks as Clara Lacek and Hannah Huddleson both tallied three goals and chipped in an assist in Saturday’s PAC win.

Mia Fetrow and Lilliana Stefanelli rounded out Boone’s scoring, while Ava Howells and Aubrey Newman both had assists. Boone goalie Ashley Finkbiner was not tested in the shutout win.

Boyertown 1, Upper Perkiomen 0 >> Dimitrije Randjelovic scored on a near-side header off a corner kick from Nick Willson to help the Bears knock off the Indians for a PAC victory Saturday.

Goalkeeper Tanner McCafferty posted his second straight shutout with two saves as the defense of Jack Albright, Justin Patten, Matt Selders, Luke Moser, and Lucas Carneiro kept him from having a busy day.

The Bears put nine shots on goal, eight of them saved by UP keeper Matt Wanamaker.

Spring-Ford 3, Owen J. Roberts 2 >> Andrew Merchant’s hat trick helped the Rams to a PAC victory Saturday and got Spring-Ford back over .500.

Merchant scored a PK in the first half, netted an Akshay Patel assist in the second and added another direct kick from 25 yards out in the second half.

Rams’ freshmen keeper Logan Hyduke (seven saves) came away with his first victory in his first game in goal.

PV broke a scoreless first half with a Chamorro left-footed strike outside the 18 with six minutes before half. Basile scored off a breakaway midway through the second half, and Schorle headed home a Slack cross for the final goal.

Wilson 4, Daniel Boone 0 >> Keegan Miller (2), Devven Frey and Josh Zielinski all scored in the second half as Wilson broke away from the Blazers for a Berks win Saturday.

Boone keeper Zach Fick made six saves in the loss.

Boyertown 1, Upper Perkiomen 0 >> Mikayla Moyer scored a goal, and goalie Ashlyn Crawford made six saves for the clean sheet in the Bears’ PAC victory over the Indians on Saturday.

Olivia MacMurray Evans found Freid just outside the 18, and she buried it in the upper right corner for the game’s only goal at the 37:45 mark of the first half.