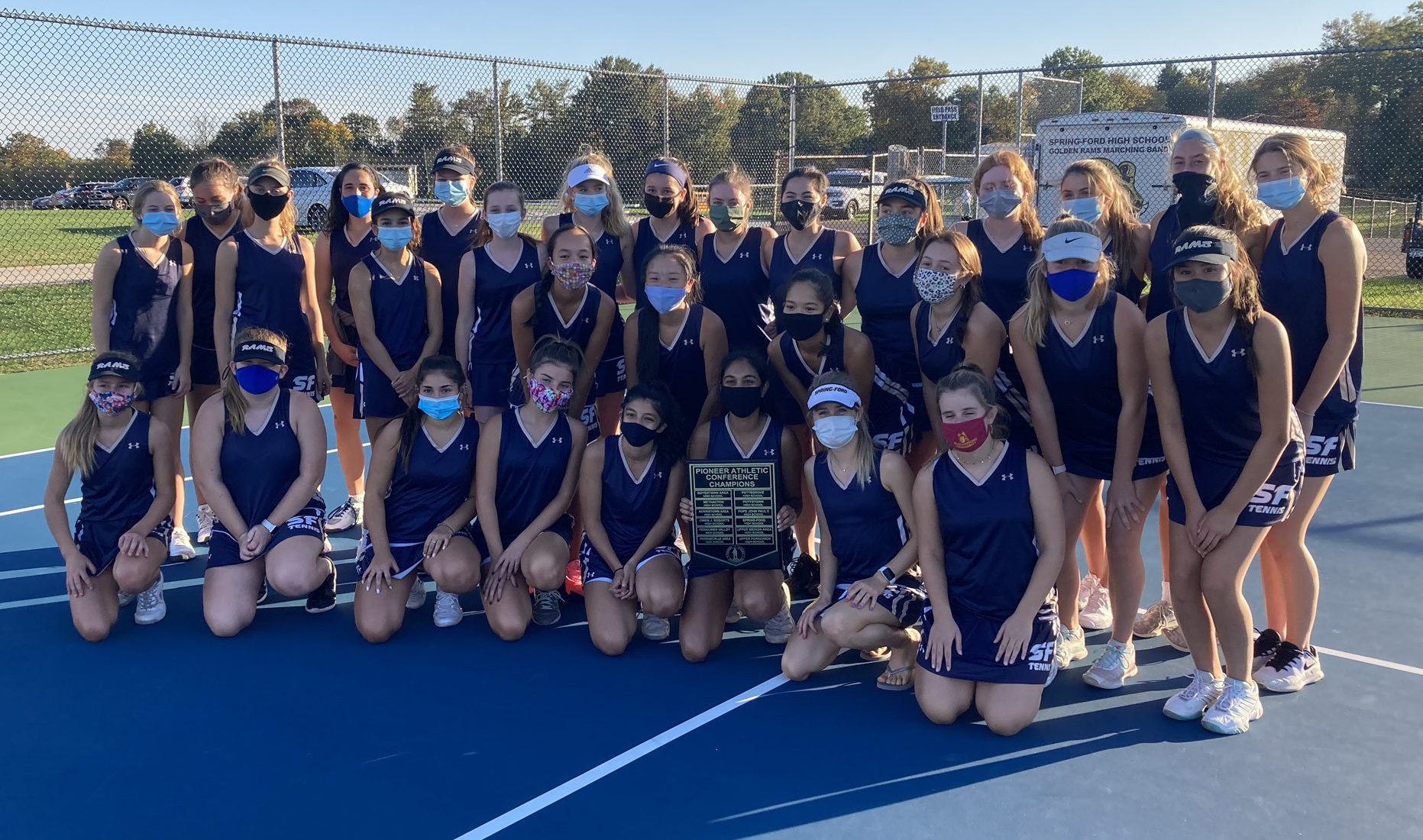 Spring-Ford 7, Boyertown 0 >> The Rams dropped just two games in the singles bracket, and seven for the match, as they swept the Bears to secure the Pioneer Athletic Conference championship Thursday.

Perkiomen Valley 3, Methacton 1 >> With a pair of first-half goals Thursday, the Vikings set the tone for their PAC victory over the Warriors.

PV started out the scoring with an Owen Love breakaway off an assist by Owen Slack 27 minutes into the game, then went up 2-0 before half when Steve Warren headed in a corner. Methacton came out strong in the second half with a Chris Rowland header in the opening minute to cut the lead to 2-1, but Owen Slack had the final tally for PV off a Matt Holmes through ball.

Michael Renner had an eight-save day in goal for PV, which was outshot 9-5. Methacton had a number of chances in the second half behind the strong play of Zach Stevenson and Chris Rowland, including a shot that hit the crossbar and a ball cleared off the goal line by PV defender Cole Campbell.

Pottsgrove 1, Upper Perkiomen 0 >> Jeremy Thompson scored on a scramble in front of the net in the first half and goalkeeper Luke Kaiser shined as Pottsgrove took down Upper Perk Thursday.

Shane Gleason was credited with an assist for the Falcons.

Boyertown 3, Spring-Ford 0 >> The Bears bested the Rams in a PAC matchup to improve to 4-4.

Daniel Boone 2, Twin Valley 0 >> Goals by Jason Bliss and Cameron Henry, the Blazers blanked the Raiders in their Berks League game Thursday.
Henry scored off a penalty kick while Boone’s Justin Fetrow was credited with an assist. The Blazers outshot (9-3) and outcornered (7-1) TV, with Zach Fick needing to make only three saves in goal for the clean sheet.

Methacton 2, Perkiomen Valley 0 >> Scoring goals in each half, the Warriors topped the Vikings in Thursday’s PAC game.

Kristen O’Brien headed a shot in off a corner at the 15:29 mark in the first half, and Julia McCann completed a breakaway off a counter attack at 5:48 in the second. Riley Wallace needed to make just three saves — the same number as PV’s Riley Hill — to get the clean sheet for Methacton.

Spring-Ford 3, Boyertown 0 >> Claire Lanzisera, Vania Mokonchu and Reese Kershner each found the back of the net as the Rams completed the season sweep of the Bears Thursday.

Riley Wallace and Ericka Eickhoff combined for the clean sheet — the sixth of the season for the Lady Rams (6-1) — needing to make just one save.

Upper Perkiomen 4, Pottsgrove 0 >> Upper Perk blew open a 1-0 halftime lead with three goals in an eight-minute span to defeat Pottsgrove. Mary Kate tallied twice for the Tribe, with Sara Edwards and Sarah Fisher contributing the other goals. Edwards, Emily Schaut and Kyra Lesko added assists as the Indians improved to 5-2. Gabby Neal made eight saves for the shutout while Pottsgrove keeper Zoe Winterbottom had seven saves.

Upper Merion 0, Phoenixville 0 >> The Phantoms and Vikings played all even in Thursday’s non-league game between PAC member schools.

Ella Stout had four saves in goal for Phoenixville, which held a 4-1 advantage in corners over UM.

Upper Perkiomen 11, Pottsgrove 0 >> Hat tricks by Bella Carpenter and Kylenne Gooch keyed a potent offense for the Indians Thursday as they rolled over the Falcons in PAC action.

Carpenter was also credited with an assist for UP, which got two goals from Ashley Gatto and solo tallies from Luci Carpenter (one assist), Jess Traynor and Maddison Conti. Takoda Wells (two) and Audrey Nagata had other assists, and Lynnsi Joyce nailed down the shutout by making stops on the two shots she faced.

Wilson 8, Daniel Boone 2 >> Erika Culp’s hat trick led a potent offense that keyed the Bulldogs’ Berks League victory over the Blazers Thursday.
Boone’s goals came from Liliana Stefanelli and Marlee Fetrow, with Clara Lacek getting credit for an assist. Ashley Finkbiner had nine saves in goal for the Blazers.

Phoenixville 26, Pope John Paul II 41 >> While the Golden Panthers claimed the first two places, the Phantoms took the next four spots in the finishing order during Thursday’s non-league meet between PAC member schools.

Boyertown 212, Upper Perkiomen 213 >> John Engle’s sub-40 round Thursday was key to the Bears edging the Indians in their PAC match at Macoby Run Golf Club.

Engle shot a one-over-par 37 to finish as runaway low man in the contest. A three-way tie for second place followed between teammate Michael Fenton and UP’s Nate Reinhart and Soren Svanson.