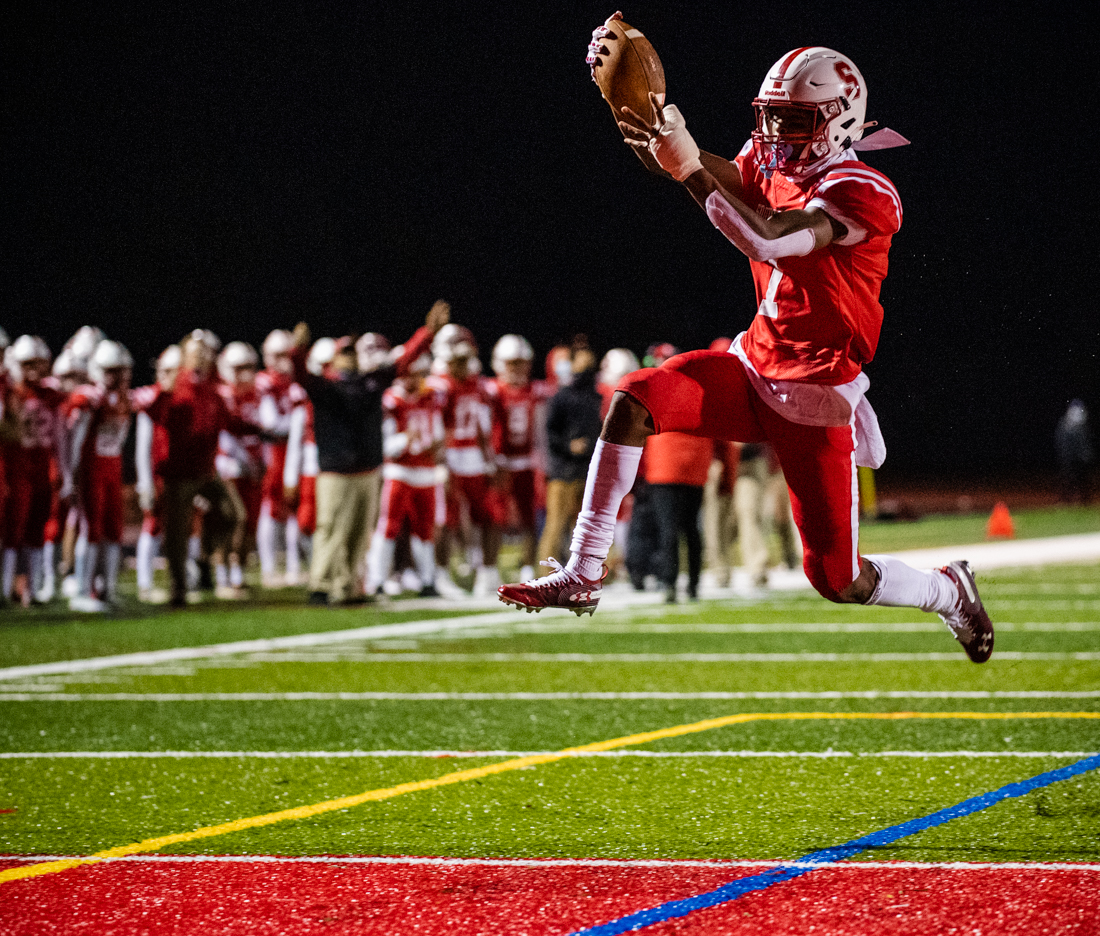 4 - Souderton's Jalen White (7) leaps as he crosses the goal line for a Indians touchdown during their game against Upper Dublin on Friday, Oct. 16, 2020. (James Beaver/For MediaNews Group)

FRANCONIA >> With Souderton closing in on a victory, quarterback Evan Kutzler wrapped things up with a nice, pretty bow.

On 4th-and-14 at the Upper Dublin 42, Kutzler lofted one deep along the sideline, placing a well-aimed dart for Kyle Bob.

“He put it in a place that only Kyle could get it and Kyle’s a really good receiver, very athletic kid,” Big Red coach Ed Gallagher said, “and he just went up and got it.”

The 28-yard gain set up Kutzler’s eight-yard touchdown pass to Shaun Purvy, which provided Souderton a 21-point lead it would not relinquish. Big Red’s 28-7 victory over the Cardinals was complete on both sides of the ball, and ran Souderton’s unbeaten record to 3-0.

There were few for Souderton, which also improved to 3-0 in the Suburban One League Continental Conference.

Said Gallagher: “I’m really happy with the effort our kids gave. They came off the ball up front, our kids finished their runs, and most importantly, we didn’t turn the ball over.”

Souderton limited a high-powered Upper Dublin (2-1, 1-1 conference) squad to just 48 yards on the ground, 119 through the air. Big Red even had a goal-line stand late in the third quarter.

“Mike Heath, our defensive coordinator, did a great job putting together a game plan to stop them,” Gallagher said. “Holding a team like that to seven points is impressive. They’re a good football team.”

Kutzler was part of that defensive effort, contributing an interception. Behind center, he completed six of 12 passes for 79 yards and a touchdown, and he also ran for another score.

“I praise our receivers. They’re a big part of what I do,” Kutzler said. “I’m really glad we got Jalen back (in the ground game). And we have Brayden (Porter) and Sean (McGoldrick). We really have a great backfield and that’s a big part of what we do.”

The Indians, mixing in some no-huddle, called on four different ball carriers, including Jalen White, who gained 30 yards on five carries during the march.

White scored on a four-yard run, providing Big Red a 7-0 lead just over three minutes into the contest.

The Indians’ defense did not allow a first down in the opening quarter, giving the ball back to their determined offense.

Souderton converted an Upper Dublin fumble into a score, with Kutzler dashing in from four yards out to make it 14-0 late in the first.

Cardinals Come Alive >> Upper Dublin cut the margin in half with a perfect mix of pass and run, using a 12-play, 63-yard drive to make it 14-7.

Jacob Rossman piled in from a yard out, bringing Upper Dublin within seven.

But Big Red strengthened its lead before the half.

The Indians ate up 7 minutes and 11 seconds of the second quarter, driving from their own 36 to the Cardinal end zone.

Kutzler scrambled for a key first down and hit Shaun Purvy for another.

With just 17 seconds left in the first half, White scored again, crossing the goal line standing up to make it 21-7 Indians at the break.

Souderton nearly doubled up Upper Dublin on plays from scrimmage in the first half – 36 to 19.

The only score of the second half was Kutzler’s 8-yard toss to Purvy, who made a spin move around the goal line to push it in for six. That TD was set up by the fourth-down throw to Bob.

“I’ve been with this group since I was in pee-wee,” Kutzler said with a smile. “So we really have great chemistry and I just love being on the field with my brothers.”