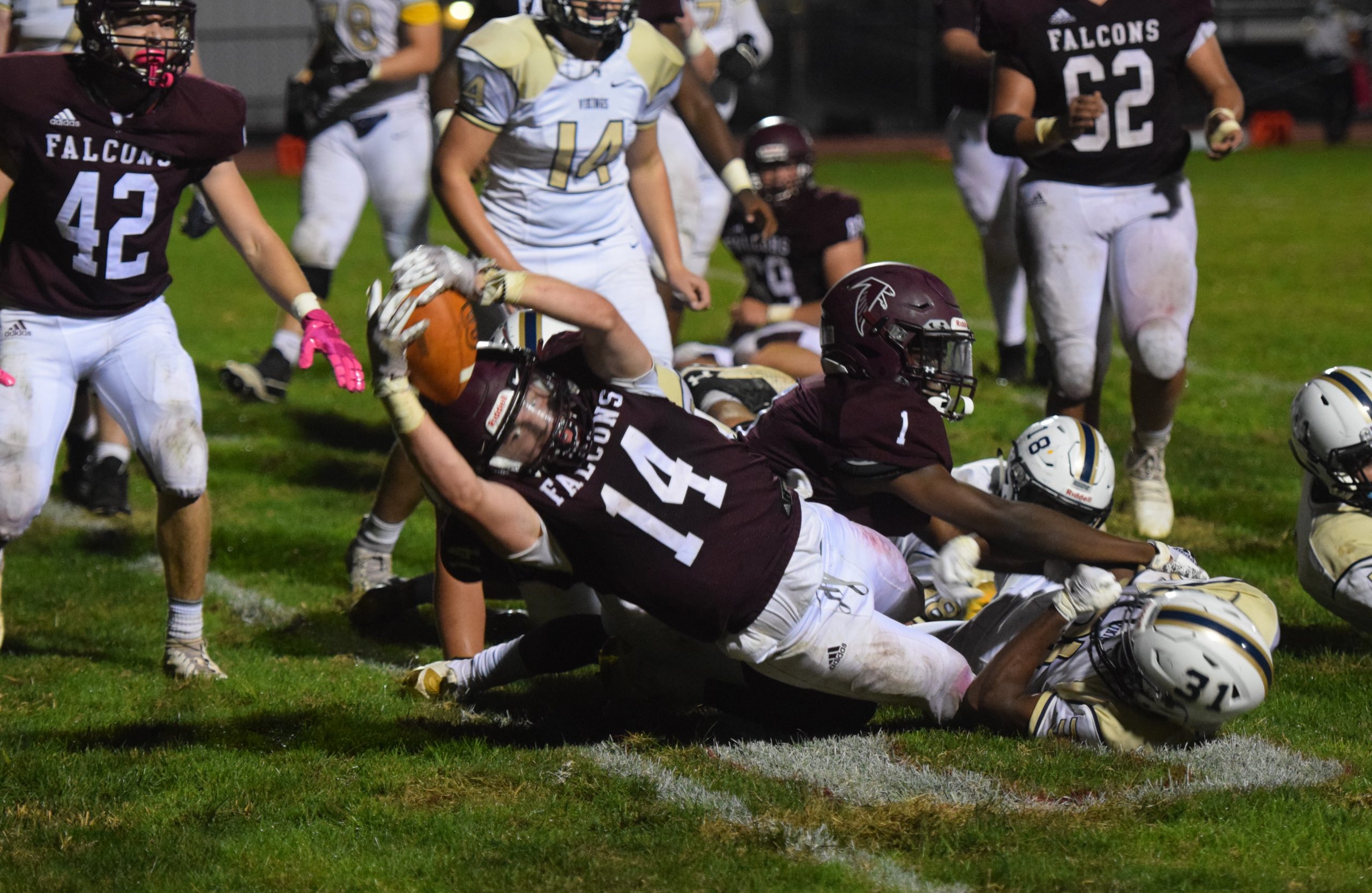 Pottsgrove's Rylee Howard reaches for the end zone on a touchdown carry in the second half against Upper Merion. (Austin Hertzog - MediaNews Group)

LOWER POTTSGROVE >> The constant refrain of this high school football season has been “nothing is normal.” Postponements, cancellations, and scheduling changes have become commonplace in a year like no other.

But as Pottsgrove returned to the field on Thursday evening, so did a bit of normalcy, as the Falcons relied upon their tried-but-true formula of running the football and playing stifling defense in slugging their way past Upper Merion, 20-7, at Pennypacker Field.

After waiting so long to begin the season, the Falcons got to play their opener one night early due to impending rain forecasted for Friday. They didn’t waste the opportunity, as Rylee Howard celebrated Senior Night by carrying for 145 of Pottsgrove’s 257 rushing yards and the game-winning touchdown, adding to his half-dozen tackles and interception on the other side of the ball.

Howard’s four-yard touchdown run capped a 12-play, 80-yard drive to snap a 7-7 tie with about nine minutes to play and put Pottsgrove in front to stay.

After Upper Merion tied the game with 3:11 left in the third quarter on a three-yard score from Aaron Anderson, it was the Falcons who held the ball for 12 of the game’s final 15 minutes, putting up a pair of touchdowns to clinch a season-opening slugfest.

Howard’s do-it-all performance was emblematic of a team whose entire attitude in getting to the point of playing its first game on Thursday night has been the epitome of selflessness.

The Falcons didn’t quit even when their season was thought to be over before it started, as Pottsgrove opted not to move forward with interscholastic football. In mid-September, that decision was overturned, but a positive COVID test cancelled last Friday’s game with Pope John Paul II.

When the team finally took the field on Thursday, the spirit of sacrifice and teamwork was still present.

Before exiting with an injury in the third quarter, Max Neeson led the way for Howard and Kayden White with crushing blocks from the fullback position and contributed a 17-yard reception. Neeson also took kicking duties in the (temporary) absence of Luke Kaiser, adding a conversion after the opening score of the game.

When Neeson did leave the contest, Kaiser’s timing couldn’t have been better, as he arrived from playing goalie in Pottsgrove’s soccer game (a shutout victory against Upper Perkiomen) in time to deliver a booming kickoff that was fumbled by Upper Merion and recovered by Trenton Allen, leading to the Falcons’ clinching touchdown drive.

The drive wouldn’t have been possible without crunching blocks from Marc White, taking Neeson’s spot at fullback after spending most of the evening in the Upper Merion backfield from his spot at defensive tackle.

“Everyone does their job,” said Howard, “and we pursue everything as a team. Lots of heart from the players, great coaching, and we’re gonna keep pushing every week.”

“When (Neeson) went down, I had to step up for the seniors on this team,” added White.

Despite some impressive size on the Upper Merion offensive line, White led the Pottsgrove defense’s pursuit along with Manny Allen, Parker Janusek, Howard, and Shane Caffrey in holding Upper Merion to only 129 yards of total offense.

The Falcons started fast, taking about five minutes off the first-quarter clock in an eight-play, 69-yard drive that culminated in Kayden White’s nine-yard rushing score to open the scoring.

From there, the first half bogged down considerably as both teams worked through some opening night jitters, with punts and penalties plentiful. Pottsgrove’s Howard provided the highlight of the second stanza, intercepting Upper Merion’s Nolan Clayton around midfield to quell the Vikings’ deepest drive of the opening half.

After the break, Upper Merion responded with their best drive of the evening, letting their big, experienced offensive line do the work as they strung together 14 plays — all runs — in a 67-yard drive that ended in the three-yard TD run from Anderson, who led UM with 72 yards on the evening.

Upper Merion’s Aaron Anderson runs to the outside for a touchdown during the second half against Pottsgrove. (Austin Hertzog – MediaNews Group)

“We came out after halftime, and we put together that drive,” said Victor Brown, head coach of Upper Merion. “That’s what we do best. It’s also what Pottsgrove does best – in a lot of ways, we’re mirror images of one another in our approach to the game.”

“Typically, we have young kids make mistakes in the opener, and I admit I made some coaching mistakes,” Brown continued. “But usually these things happen in a scrimmage, which we didn’t have this year. Instead, it happened against Pottsgrove, and Bill [Hawthorne] and his team make you pay for mistakes. It’s been that way as long as I’ve been here.”

Indeed, Pottsgrove responded with their own six-plus minute drive to put the winning points on the board and sealed the game with Ryan Sisko’s two-yard touchdown with 5:14 to play. The drive was keyed by Sisko’s first-down completion to senior Justin Wescoat to set up a first and goal.

The 1-0 Falcons will battle Phoenixville next week in the Phantoms’ opener, while Upper Merion hosts Pope John Paul II.

Thursday was Senior Night at Pottsgrove, as the Falcons honored the eight seniors who’ve endured numerous setbacks and hardships to play their final high school season.

“As you saw on that final drive… we’ve got Rylee Howard running the ball, Justin Wescoat making a huge catch, Manny Allen and Ethan McHugh with big blocks up front, Luke Kaiser kicking the point after… those are all seniors,” said Falcons head coach Bill Hawthorne. They’re what Pottsgrove kids are all about – they never give up, all they want to do is play football and enjoy Friday nights with their friends.”

For a change, this time they didn’t even have to wait until Friday.