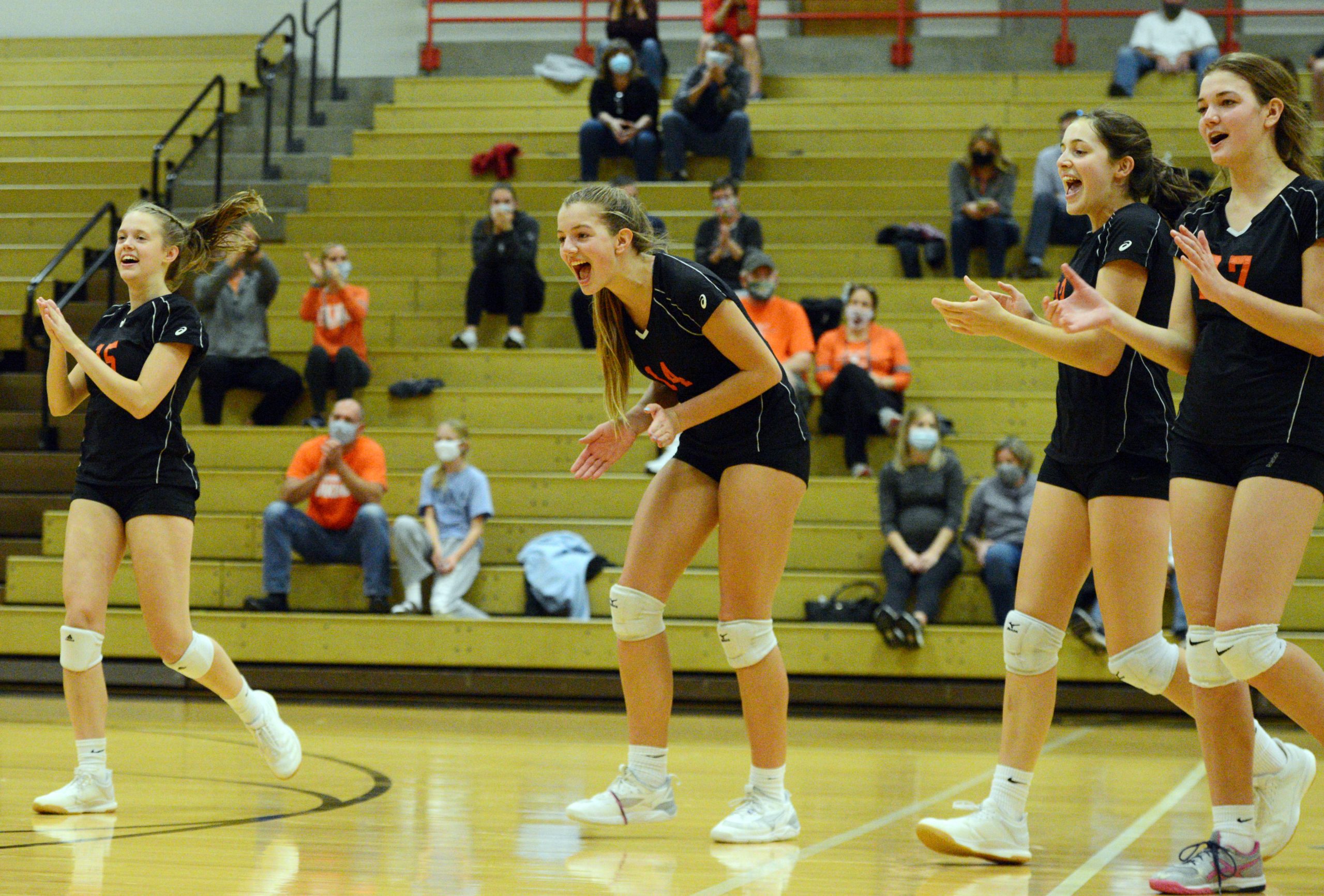 BOYERTOWN >> The Pioneer Athletic Conference won’t have a girls volleyball postseason in 2020 like in typical years.

Instead, the PAC’s top two teams — Boyertown and Perkiomen Valley — played what will likely be the closest thing to a league championship game Wednesday at Boyertown.

Adding to the atmosphere were two rows full of cardboard cutouts and about 75 living spectators as both teams played in front of a crowd for the first time this fall.

“This was one of their huge goals,” said PV second-year head coach Jessica Highley. “This is what they wanted to do. … This was something that we had to prove, that we could beat Boyertown because they’re well-coached, well played. They came out as underdogs at the start of their program and they have soared. This was a huge win for my kids.”

Six PAC schools opted in at the start of the season in late September and due to an altered schedule caused by the COVID-19 pandemic, the PAC decided on a round-robin schedule to decide its league champion. Every team plays the other five schools twice.

Boyertown (6-1) entered Wednesday unbeaten — a 3-2 win Sept. 28 over PV its closest game to date — and hoping to put itself in prime position for a sole claim of the league title a season after finishing as the PAC runner-up.

The Vikings (6-1), who missed out on the PAC Final Four last season, had other plans, hoping to give themselves a chance at their first league title since sharing the PAC championship with PJP in 2015.

“We were so excited,” Izzy Clauhs said. “These are big rivals of ours. It’s always fun playing with them. Through corona, we’ve been looking at volleyball for an outlet just to get away from it.”

“Our last game against them really frustrated us, so that felt really good,” Naomi Clauhs added.

Up until last week schools were not permitted to allow spectators due to state restrictions on the number of people allowed at indoor gatherings.

Wednesday’s victory was extra special for the Clauhs sisters as it was the first time their father Bill and younger siter Ester were able to them play in person this season.

“They’ve been tuning in online, but it’s really hard with WiFi and connections to really get them feel the energy of the game too,” Izzy Clauhs said. “It’s hard to go home and describe what the energy was like, but having them right beside us tonight they definitely felt that.”

Perk Valley wins third set 25-20 to go up 2-1 … Izzy Clauhs with the winning point for the Vikings. pic.twitter.com/TGpPUUYu2c

Up two sets to one, PV took a 17-10 lead in the fourth set as it attempted to close out the victory in convincing fashion. Helped by a run of points from senior Emma Ludwig, the Bears responded with 12 of the game’s next 14 points to go ahead 22-19 as they tried to force a fourth set.

Perk Valley found a way to survive the run, responding with six straight points to take the set and the match.

Allison Pioli with the kill to finish off a 25-17 second set for Boyertown. Game tied 1-1. pic.twitter.com/px9E3HIMEd

The Bears have relied on Ludwig and junior Adrianna Derstine, two key returners from last year’s PAC runner-up squad, this season, while Ludwig noted the team’s overall defense has been a strength.

“I just think momentum in volleyball is something that comes and goes quickly. We had a couple tough serves and pressure, every kid out here was feeling it because they know what this meant. It was a good match. It was fun for the kids.”

PV was missing some of the resolve it showed in Wednesday night’s win last season, which was part of the reason the Vikings fell short against some of the PAC’s top teams in 2019.

With a year of experience under their belts, the Vikings used past moments to bear down and grit out a marquee win.

Perkiomen Valley finishes its league slate with Spring-Ford (3-4), OJR and Methacton and added a non-league match with PJP as well. If both teams win out they’ll both claim a share of the 2020 PAC title.

NOTES >> Before Boyertown was allowed to admit spectators into its games, the Bears began to fill one side of their bleachers with cardboard cutouts, similar to what professional teams like the Philadelphia Eagles and Philadelphia Phillies did at their games.

“We’ve been working on getting them up there just kind of to support the kids and have something to show them that their parents love them and care about them and that their families are there for them,” Ludwig said. “Because it’s hard. They put so much into it to not have your family around. Tonight was nice to have people here and be able to see them.”