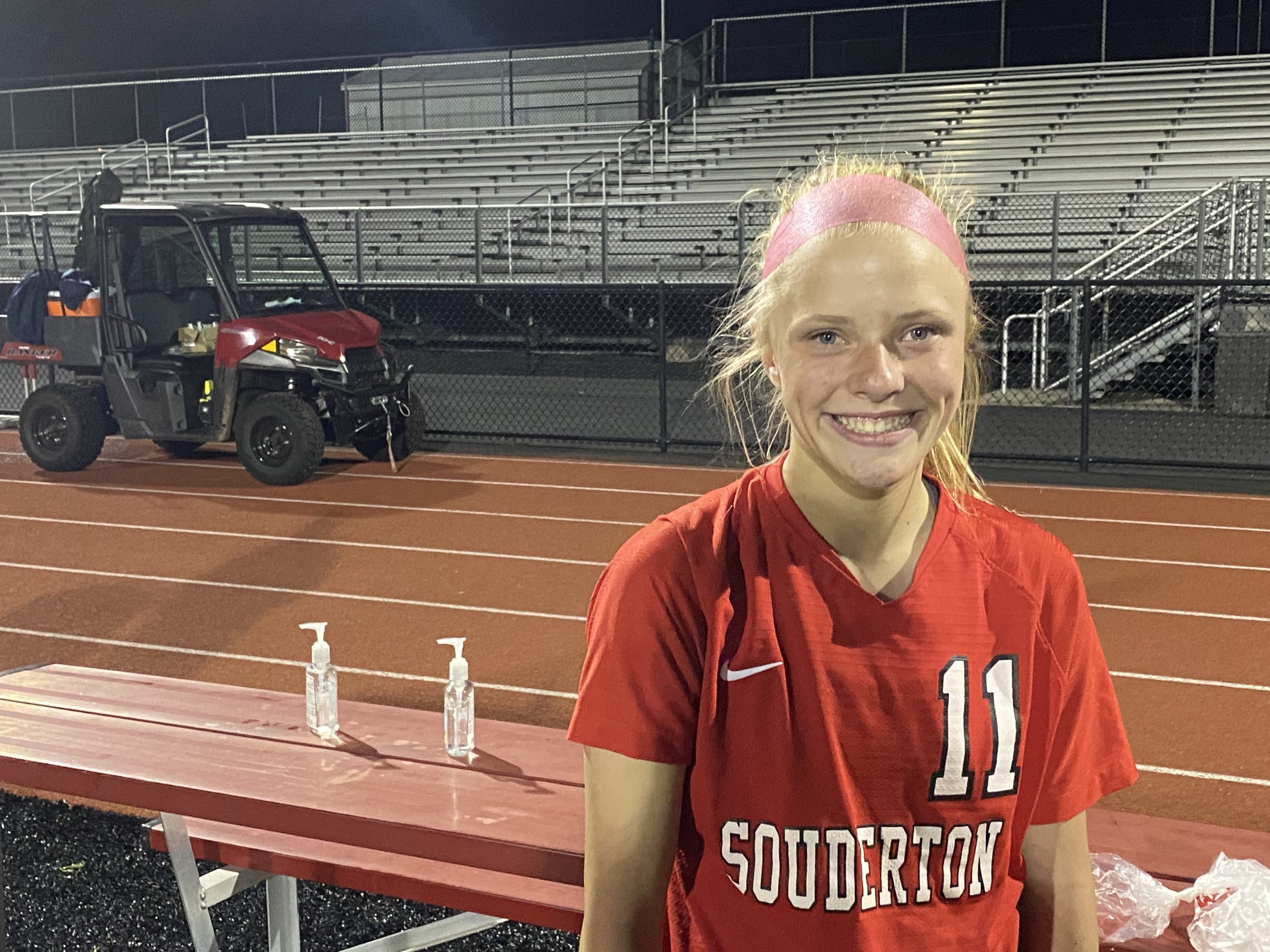 Souderton's Katie Pazdziorko scored two goals, both in the second half, as the Indians defeated North Penn 3-0 on Thursday, Oct. 15, 2020. (Mike Cabrey/MediaNews Group)

FRANCONIA >> For a moment, Katie Pazdziorko thought her effort racing down the field was going to be undone by the goal frame.

“I thought it was just going to hit the post and come back to me, so I was ready for it,” the Souderton junior said.

Her shot did indeed hit the woodwork. But the ball took a fortuitous ricochet off the right post and into the net, putting both Pazdziorko and the Indians girls soccer team at ease late in the second half of their SOL Colonial Division contest with visiting North Penn.

“It’s just a relief,” she said. “And then you can go celebrate.”

Pazdziorko’s tally with 11:01 remaining was her second Thursday, both goals coming after halftime as the Indians pulled away from the Knights to claim a 3-0 Senior Night victory.

“Literally looks like she flips a switch and it’s like will power,” said Souderton coach Ian Smith of Pazdziorko. “It’s like ‘Oh, I’m going to score now.’ And what more could you ask for?”

GIRLS #SOCCER: 11:01 2H Souderton 3, @NPWomensSoccer 0. Katie Pazdziorko with her 2nd of the night, hitting one in off the right post to finish a breakaway off a NP corner. pic.twitter.com/Onsc2Q4cFk

North Penn (1-6-1, 1-6-1 division) put pressure on the Indians defense in the first half, creating a few opportunities on free kicks but it was Big Red that broke through before the break – sophomore Alexis Stefanowicz scoring her first varsity goal by knocking in a loose ball on a corner in the 27th minute.

“First half, biggest thing for us was we were struggling to create and we finally win a corner kick and we were able to kind of nick one there,” Smith said. “Alexis has had a really big week. I mean, she’s a sophomore that has been pretty much starting for us all year in a pretty tough position, at that holding mid position. And she’s had a great week.”

Pazdziorko extended the lead in the 50th minute, blocking a clearance from the 18-yard box then putting a shot into the far left corner. She collected her second goal in the 69th on a counterattack after a NP corner as the Indians (4-4-0, 4-4-0) bounced back from Tuesday’s 2-0 loss to Central Bucks East

“I think we just wanted to do good for our seniors,” Pazdziorko said. “They work hard all season and they just deserve a special night so we need to win.”

Both teams at the moment find themselves out of the District 1-4A field, which was announced this week to be 16 teams – as North Penn sits 22nd in the power rankings while Souderton is 23rd. The Knights and Indians each have two games left.

“Silver lining I guess – and there’s goods and bads to this – is we play West and we play Pennridge,” Smith said. “So if we want to claim that spot in playoff it’s there for the taking and that’s for sure. The mentality now is to show up for every game like it’s our last because it could be.”

GIRLS #SOCCER: 30:14 2H Souderton 2, @NPWomensSoccer 0. Katie Pazdziorko double the Indians’ lead with great effort: getting down the left side, blocking a clearance attempt then puts a shot into the right corner. pic.twitter.com/bF18G5ZrTD

North Penn threatened on restarts early but Big Red’s Morgan Molyneaux was steady in goal, allowing Souderton to weather the first-half pressure and earn a regular-season sweep of the Knights.

“Morgan’s been a great leader, great captain this year and moments like that we rely on her so heavily, Smith said. “We gave up a lot of unnecessary free kicks – that was another thing we talked about at halftime and in dangerous positions so I count on her to direct traffic as far as man-marking and defending.”

A free kick from about 28 yards out was parried over the end line by Molyneaux, who in traffic hauled in the ensuing corner in the game’s sixth minute.

In the 21st minute, the Knights earned a free kick just above the box after a handball. Riley Saxman dropped a ball over the wall and to the front of goal but North Penn could not get a foot on it and the ball bounced wide left of the net.

Stefanowicz struck for the 1-0 Souderton lead with 13:15 left until halftime, as a corner taken by Pazdziorko bounced to the sophomore, who lofted a right-footed volley into the net.

“It was a corner kick and the goalie punched it away and just kind of volleyed it with my foot into the goal,” Stefanowicz said. “And just went up at the top corner.”

In the 36th minute, Molyneaux kept the Indians ahead with a diving save to deny a shot from Kloey Carminati.

Pazdziorko’s first goal came at 30:14 in the second half. After making a run down the right side, Pazdziorko sent a cross into the box towards Averie Doughty but it was knocked away by the Knights. NP attempted a clearance but Pazdziorko stepped in front to block it then got to the loose ball first and knocked a shot into the far left corner.

In the 57th minute, the Indians Hannah Alderfer ripped a shot off a cross but it was sent directly at NP keeper Anna Fiore, who smothered the effort.

Two minutes later, the Knights had a chance to pull within a goal, but Carminati could not connect on Anahita Eshraghi’s cross to the front of the net.

Pazdziorko’s brace gave Big Red the three-goal cushion. Avery Nogami collected a cleared NP corner and sent Pazdziorko forward on a breakaway. Pazdziorko outraced a defender then let go a shot the tapped off the right post and in at 11:01.