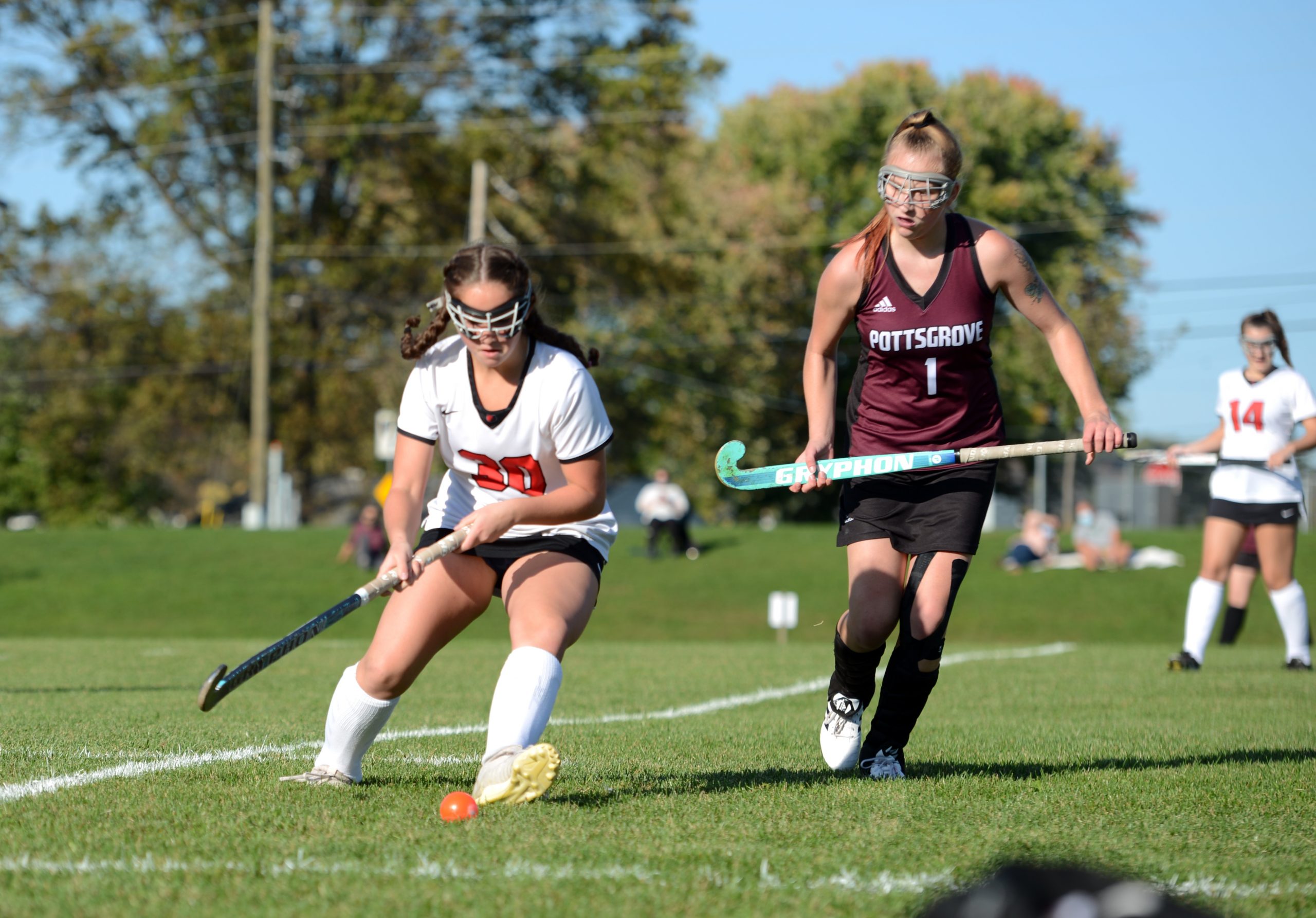 BOYERTOWN >> The Boyertown field hockey team has found a spark this fall.

Coach Karen Kooker and the Bears don’t plan on letting it run out any time soon.

After dropping consecutive games for the first time this season, Boyertown bounced back Wednesday, picking up a 2-0 victory over Pottsgrove in a Pioneer Athletic Conference contest.

For the Bears (4-3), who won a total of three division games over the past three seasons and tallied just four wins overall a season ago, it was the fourth league win of the 2020 season with five games left to play.

“It’s been amazing,” said Dulin, one of the team’s captains along with Caprio and senior Kelsi McDevitt. “We didn’t even think we’d have a season, so to just come out here, we lay everything out on the field every game we have.”

Boyertown has struggled against the Liberty Division in recent memories, not finishing with a winning league record in at least a decade. Its best league mark in recent history was a 5-8 Liberty record in 2015.

Coming off a 4-13 overall season in 2019 in which lots of players gained their first varsity experience, the Bears entered the 2020 season with some internal expectations.

However, they knew they would be playing the underdog role quite a bit in a reconfigured PAC consisting of four of the league’s top large schools — Owen J. Roberts, Perkiomen Valley, Methacton and Spring-Ford — and the reigning  PAC champ Upper Perkiomen.

Boyertown opened its season with a win against the Falcons back on Sept. 25 before winning two of its next three, sandwiching victories over Liberty rivals Spring-Ford and Perkiomen Valley around a loss to reigning PAC champ Upper Perkiomen.

While they followed the 3-1 start with losses to Owen J. Roberts and Methacton, the Bears hope Wednesday’s win will help them right the ship as they try to turn a few more heads to finish out the season, Kooker said.

“We came out flat from our two losses, so we came out really strong and put the balls in the cage early, which is good because we couldn’t make anything work in the circle in the second half,” Dulin said.

“It’s been crazy because as you know, Boyertown, last year we didn’t do as well,” she added, “With that big win against PV, I think it boosted everyone’s morale and made everyone excited.”

Before it found itself as one of two Frontier schools in a seven-team PAC, Pottsgrove was in a similar position as Boyertown, coming off a season where lots of players gained valuable experience and positioned to make noise in the Frontier Division.

The Falcons (0-7) are doing their best to hang with the league’s large schools in a reconfigured PAC.

After falling behind early in Wednesday’s game, the play of junior goalie Makenzie Johnson and defense led by senior Ava O’Neill helped keep the Falcons’ hope for their first win of 2020 alive, but Pottsgrove couldn’t muster any offense against a Boyertown defense led by Jaz Fink and Kiersten Prosock.

The Falcons had a couple of chances to get on the board, but Boyertown goalkeeper Sarah Yoder stopped both of the shots she faced in Tuesday’s game. The 2-0 defeat was the Falcons’ closest game of the season.

“The girls have good energy,” Pottsgrove coach Jodi Sproule said. “When they start spreading out and working the ball down the field and communicating, you can definitely see things opening up for them. … For them to hold (Boyertown) to 2-0 — they really wanted to get that goal and they were really close a couple times — I’m proud of them.”

Sproule called her players are ‘fighters’ and has been impressed with their resiliency in each game this season despite not having a positive result to show for it.

She’s hoping with a strong defense in place, players like junior Alaura O’Neill can find a way to ignite the offense and steal a way a win or two down the stretch of the season.

“It has been tough, but they’ve somehow kept their spirits going,” Sproule said. “They’ve made realistic goals like, ‘Hey let’s keep them to this many points. Let’s score this many goals.’”

“It’s a mental challenge for them for sure,” she added, “especially in the virtual world they’re struggling with that emotionally, but then coming out here and keeping their heads up when sometimes they feel beat down is pretty amazing.”

With its two games against the Falcons finished, Boyertown will now get its second crack against the league’s other five teams. They travel to Spring-Ford on Friday and return home against Upper Perk next Monday before finishing with games at PV, home against OJR and at Methacton.

“We’re very pleased that we were able to beat teams that we haven’t in the past, but we want to keep that ball rolling,” Kooker said. “We’re not finished surprising people. Every game has a challenge but we try to learn from every game win or lose, so we’re ready for Spring-Ford and then Monday Upper Perk, but we’re not finished surprising people.”