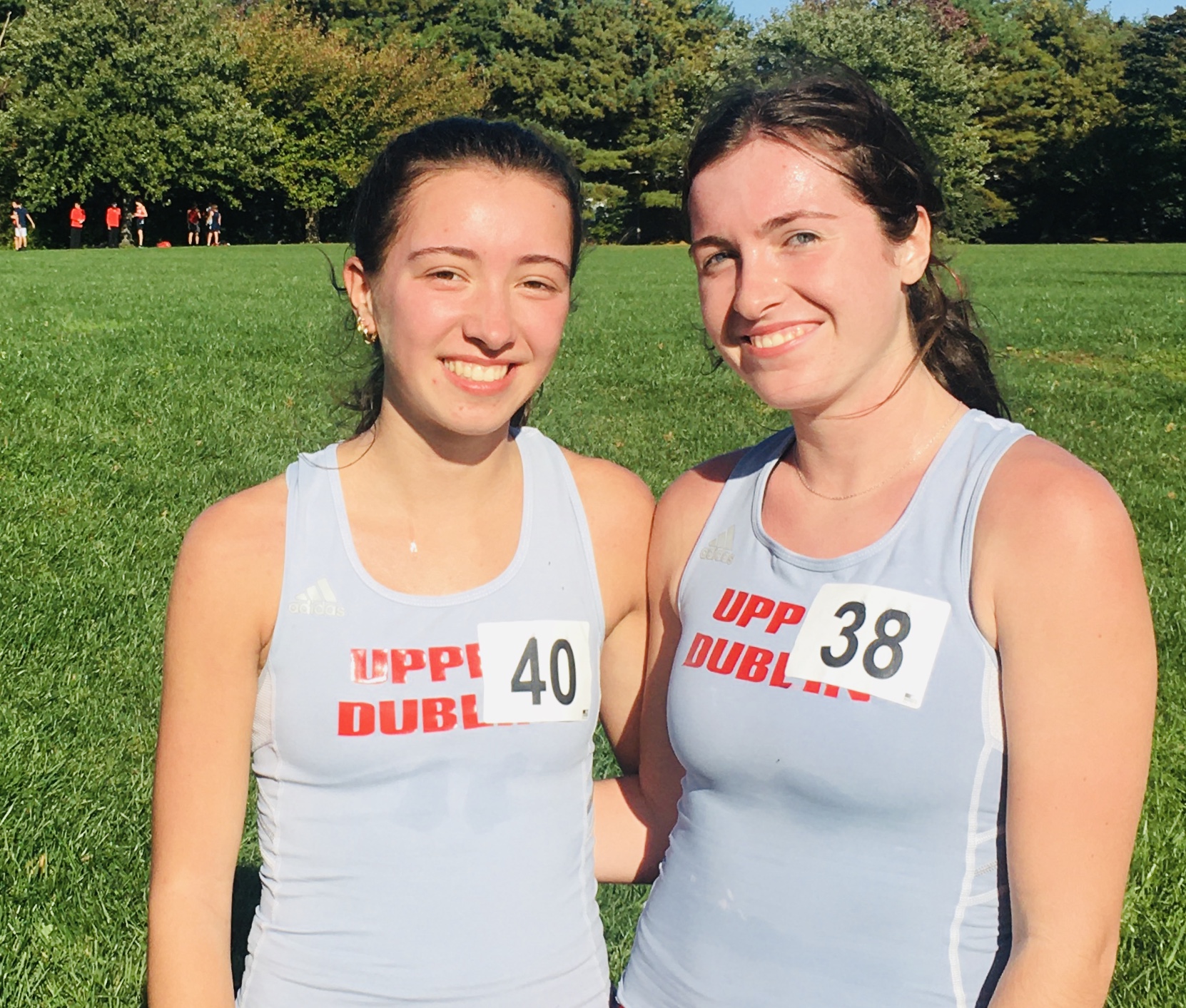 Sarah Eskew (right) and Caitlin Burmester finished first and second to lead Upper Dublin to a win over Plymouth Whitemarsh on Wednesday, Oct. 14, 2020.

WHITEMARSH >> Due to the pandemic, many freshmen in the area began their high school experience online.

It’s not the ideal way to start, but for Gus Platt, one of those area ninth graders, running has kept things familiar.

“Running’s kind of nice because you can do that any time, whether you’re quarantined or not,” said the Upper Dublin freshman. “Lots of laps around the neighborhood…”

Platt and the Cardinals ventured over to rival Plymouth Whitemarsh on Wednesday, and enjoyed the surroundings.

Platt set the pace and led the way to victory, as Upper Dublin packed things nice and tight and earned a 19-36 victory in the Suburban One League American Conference clash.

“I was trying to go out fast and hold it,” said Platt with a smile.

The Upper Dublin girls followed with a commanding 15-40 win over the Colonials, making it an Upper Dublin sweep at PW.

“We haven’t lost yet and I felt like the guys put in a pretty good effort today,” Cardinals coach Paul Vandegrift said of his squad, now 4-0. “They’re starting to work together and be competitive with each other.

“We haven’t had the advantage of invitationals this year so we’ve had to do it all at these conference meets. It’s a little tough doing it over the course of just five races.”

Platt, who finished in 17 minutes, 29 seconds, has come on strong, very quickly.

Said Vandegrift: “I’ve never had a ninth grader run that well before.”

James Fitzmaurice crossed second for the Cardinals, who placed five in the top seven.

Regent Walden was the top finisher for PW, in fourth with an 18:33.

The Upper Dublin girls dominated their race, taking the top seven spots. Sarah Eskew (21:36) and Caitlin Burmester (21:37) were a nice tandem out in front.

“We were very consistent this race,” Eskew said of the Cardinals, who also raised their record to 4-0. “We have a good squad this year and we’ve been doing well. It’s looking good.”

Upper Dublin makes it count every time it strides onto the course.

“There are a lot less chances to run so every opportunity means that much more,” Burmester said.

“We don’t have a lot of invitationals so we don’t really have a chance to run our fastest so we just focus on winning every race,” Eskew said.